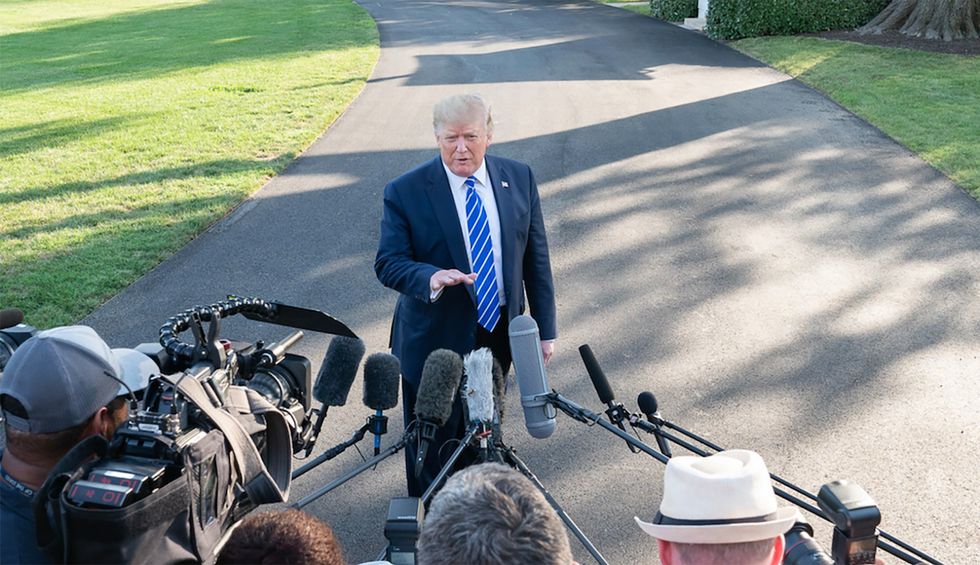 President Donald J. Trump talks to members of the press on the South Lawn of the White House Friday, Aug. 30, 2019, prior to boarding Marine One to begin his trip to Camp David near Thurmont, Md. (Official White House Photo by Joyce N. Boghosian)
Eric Boehlert
,
Daily Kos
and
Eric Boehlert
October 06, 2019

Donald Trump's stupefying public performances last Wednesday as the widening collusion scandal continued to gain momentum were stunning, even by his erratic standards. Trump uncorked rambling, incoherent, angry, whiny monologues that were filled with lies and rattled conspiracy theories. That's when he wasn't yelling at a Reuters reporter and threatening to sue members of Congress. Incredibly, both disturbing Alex Jones-style performances were delivered inside the White House by a sitting American president.

The two sessions with reporters advertised an unstable man who clearly is not attached to reality and has no interest trying to be. They featured a president who had trouble articulating coherent thoughts and who lied at an astonishing rate. They really did perfectly capture the lunacy that has become the Trump presidency. But how did the Beltway press cover the mighty Trump meltdown, and specifically his joint press conference with the president of Finland?

Much of the Beltway press whitewashed the event, watering it down to seem as if Trump had merely been contentious and aggressive. Trump was in a "stormy" mood, according to The New York Times. Meanwhile, The Washington Post depicted the entire debacle as merely a "fiery," "combative" event (a "roller coaster"), and the Wall Street Journal stressed Trump's "free wheeling style." For news consumers, "stormy," "fiery" and "free wheeling" don't sound like there's reason for alarm, right? Those descriptors seem almost normal. They represent acceptable behavior by mainstream politicians, and don't even hint that Trump might be some kind of sociopath who uncorked epic, shocking meltdowns in plain view last week.

But so it goes at the Trump White House, as American reporters have become accustomed to turning Trump's erratic, unstable performances into something that appears to be not so unusual. In contrast though, foreign journalists, and particularly foreign journalists who travel to the U.S. and watch Trump's bizarre actions in person, don't have the same interest in normalizing him. Stunned visitors covering the same president, and who are likely less concerned about maintaining White House access, often present a much more accurate, and far less filtered look at Trump's disturbing conduct.

In Finland, Trump's deranged press conference last week was dubbed a "Trump circus" by one leading newspaper, while a headline in the UK's Independent accurately called Trump's presser "rambling" and "furious." It seems journalists who view the Trump insanity from a different perspective aren't so circumspect about accurately describing the insanity that's unfolding in front of them.

When Australia's prime minister visited the White House last month and took part in yet another bizarre press event with Trump, one stunned Australian journalist covering the event turned to a Wall Street Journal reporter and asked, "Is it always like this?"

Also traveling to the U.S. from Australia recently, Guardian journalist Lenore Taylor wrote about how amazed she was to watch Trump speak in person for extended monologues, how utterly incoherent his comments were, and how often reporters clean up those comments in order to make them seem sensible and normal within the context of news articles. "Watching just one press conference helped me understand how the process of reporting about this president can mask and normalize his full and alarming incoherence," she wrote in a piece headlined, "As a foreign reporter visiting the US I was stunned by Trump's press conference."

Speaking of normalizing the incoherence, the Times described Trump's manic Wednesday meltdowns this way: "President Trump used two events at the White House with the president of Finland on Wednesday to challenge Democrats as they pressed ahead with their investigation into whether Mr. Trump had abused the power of his office in seeking political dirt from Ukraine." Pretty pedestrian, right?

Why the larger hesitation among the American press? Why the lack of necessary truth-telling? It's likely the same reason lots of large news organizations, to this day, won't call Trump a liar, even though he's on pace to tell more than 16,000 lies while in office. News outlets don't want to take heat from conservatives and from the administration for calling Trump a liar. So even though they've documented that he lies all the time, reporters opt for timid words like "falsehoods" to soften the blow.

The same is true with regard to Trump's increasingly unhinged behavior. I doubt there are many members of the Washington press corps who watch Trump's unsettling public screeds and think, “He seems stable, and I have no questions about his mental capacity.” They all know it's a pressing issue. But newsrooms don't want to suffer the backlash—the shouts of "Liberal media bias!"—that would target any journalists who tackle the story, even though it's so obviously newsworthy.

So instead of telling the truth regarding Trump's dangerously erratic behavior, we get watered-down "stormy" and "fiery"-type coverage from the Beltway media. Thankfully, outsider journalists often provide a fresh perspective. As impeachment heats up (along with Trump’s madness), we’re going to need that clear-eyed viewpoint.