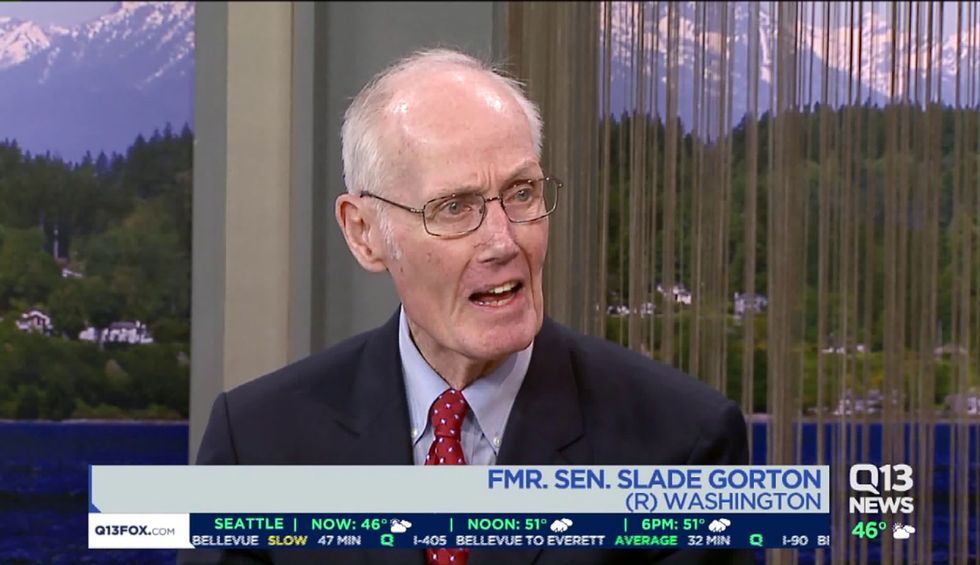 In March 1974 — when the Watergate scandal was getting worse and worse for President Richard Nixon — conservative Republican Slade Gorton called for Nixon’s resignation. Five months later, Gorton (who was serving as attorney general for Washington State at the time) got his wish: Nixon resigned in August 1974, and Vice President Gerald R. Ford was sworn in as president of the United States. Gorton is now 91, and he is once again in favor of an impeachment inquiry against a Republican president — only this time, it’s President Donald Trump.

Gorton discussed the House impeachment inquiry against Trump during an interview with the Seattle Times. Many Republicans in Congress are insisting that Trump did nothing wrong on July 25, when he tried to pressure Ukrainian President Volodymyr Zelensky into investigating former Vice President Joe Biden and his son Hunter Biden. But Gorton (who represented Washington State in the U.S. Senate in the 1980s and 1990s) strongly disagrees, joining House Speaker Nancy Pelosi and other Democrats in asserting that Trump seriously crossed the line by encouraging a foreign leader to investigate a political rival.

“I reached the conclusion that there are a dozen actions on this president’s part that warrant a vote of impeachment in the House,” Gorton told the Seattle Times’ Jim Brunner.

Trump’s defenders have maintained that there was no quid pro quo during the president’s interactions with Zelensky, and his detractors have stressed that there certainly was: military aid to Ukraine in exchange for looking for dirt on the Bidens. Gorton, clearly, is among the detractors.

The former U.S. senator told Brunner, “That poor president of the Ukraine, trying to keep an independent country…. and the president of the United States is holding up his money and his reputation and everything else. Of course, that was not an even negotiation by any stretch of the imagination. It was a pure shakedown.”

But while Gorton (who was the last Republican to represent Washington State in the U.S. Senate) is very much in favor of an impeachment inquiry, he hasn’t gone so far as to call for Trump to be removed from office. If Trump is indicted on articles of impeachment in the House, Gorton told Brunner, it will be up to the U.S. Senate to weigh their merits.

“Whether or not they (the impeachment charges) warrant conviction in the Senate is a different and more subjective question because you have to ask that question: how important is it? Is it enough to overturn the verdict of the voters in 2016?,” Gorton explained.

Trump is the fourth president in U.S. history to face an impeachment inquiry in the House. Democrats Bill Clinton and Andrew Johnson were impeached by the House but later acquitted by the Senate and served out the rest of their terms. Nixon, however, resigned before a Senate trial could come about.

Gorton was among the U.S. senators who, in early 1999, took part in Clinton’s Senate impeachment trial. The 91-year-old Republican told Brunner, “I said perjury, lying about sex — he did it, of course — was not sufficient to overturn the verdict of the voters, but obstruction of justice was. I’m not entirely sure I was right on the second count.”

Gorton served as attorney general of Washington State from 1969-1981. After that, he spent many years in the U.S. Senate but was voted out office when, in the 2000 election, he was narrowly defeated by Democrat Maria Cantwell.