Trump's lawless Republican mob was egged on by Sean Hannity 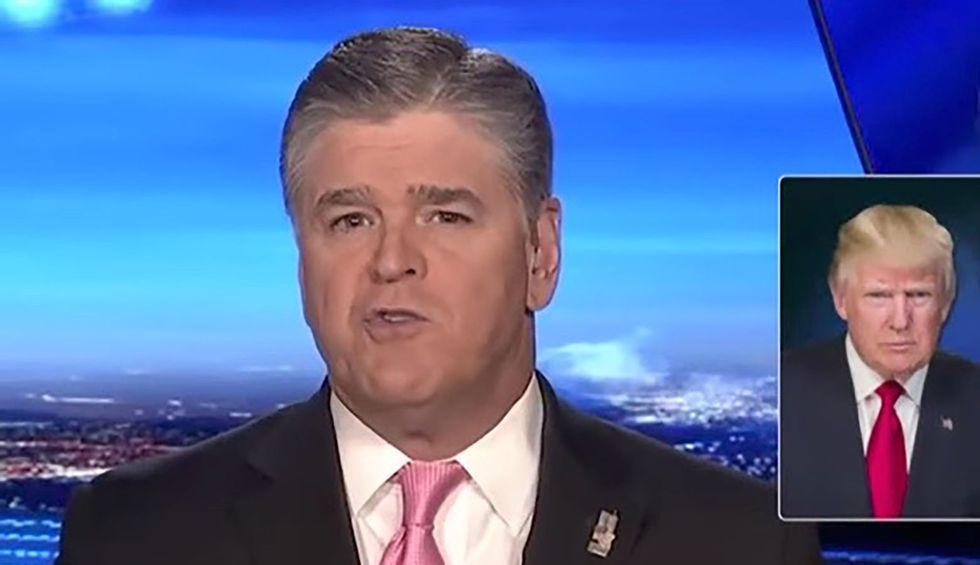 A hint that some mob action was in the works came the night before in a rant by Fox's Sean Hannity, who channeled Trump for 15 minutes.

"To be a Democrat you can’t believe in truth, reason, common sense,” Hannity thundered on Tuesday night, projecting on House Democrats the barbarous tactics of the Republican backbenchers. “This is now a lawless mob. Now nothing we are witnessing is driven by facts, law, constitutionality. No, a psychotic rage and hatred at all things Trump.”

Just hours later a lawless mob appeared on Capitol Hill, but not one composed of Democrats. Instead, we saw an invasion of a secure hearing room by two dozen white Republicans, all but one male. The mob, led by know-nothing Rep. Matt Gaetz (R-Fla.), ordered Chik-Fil-A and pizza, leaving a mess when they departed. They improperly used cell phones.

That hearing room is specially designed to block electronic eavesdropping. Gaetz used a cell phone in the room, no doubt delighting the Russian, Chinese, Iranian, North Korean, Saudi and other intelligence agencies. His frat house conduct forced a careful reset of the room’s anti-spying gear.

The dangers of this rash behavior are detailed in an essay by Mieke Eoyang, a longtime national security expert who worked for the House Intelligence Committee.

During his rant, Hannity, and the next day mob leader Gaetz, along with others lied again and again in saying that impeachment depositions being taken in that room were lawless and that Republicans were excluded. In fact, more than 40 Republicans have the right as members of various House committees to attend and to ask all the questions they choose.

For proof that they are lying one need only look back to when Trey Gowdy, a South Carolina Republican chaired the Benghazi inquiry. It turned up nothing, but it also was just like the current inquiry open to minority members, then Democrats, who were on the committee. Then as now, the minority could ask all the questions they wanted in the closed-door hearings that were conducted ahead of public hearings.

Also unmentioned: the rules of the inquiry were set by Republicans in 2015 when they were the House majority. The Democrats left those rules in place when they regained the majority in January.

Trump, desperate to stop an unstoppable onslaught of facts exposing his traitorous, self-serving and criminal activity, will say anything to save himself. In Hannity, he has the perfect loyalist, a man willing to parrot whatever Trump tells him, no matter the consequences for our nation.

The key here is that to blindly loyal Trumpers like Hannity, Trump matters first, last and always, our Constitutional republic be damned.

As everyone should realize by now, whatever Trump accuses others of is a declaration of what is going on in his own jumbled and now terrified mind. It was a lesson I learned from my earliest conversations with Trump soon after we met in 1988.

Hannity’s specific words and their tone Tuesday night made clear that he was saying exactly what Trump instructed. The crazed and overheated language, combined with absurd lies, are standard Trump chaos-making tools. We now know, too, that even as Hannity was parroting the Trumpist line, Trump and the renegade Republican House members had already hatched their plot to storm the committee meeting.

“We are going to breakdown in detail something corrupt and dangerous to this democratic republic that we love,” Hannity began. “We will expose on this program the Democrat’s top-secret, the Soviet-style impeachment coup attempt and how it is an unprecedented unconstitutional attempt to nullify the will of the American people.”

Right on cue when the word “Soviet” was spoken Hannity’s background screen showed a red background with three elements: Hammer & Sickle, Nancy Pelosi and, behind her, Adam Schiff.

How many Hannity viewers had the presence of mind—and minimal depth of understanding—to recognize the absurdity of using Russian communist symbols in an attempt to discredit politicians who are exposing Trump’s fealty to the Kremlin and Vladimir Putin, the modern tsar? My guess: not many.

“The whole process is more corrupt, lacking all due process, all constitutionality, and constitutional protections,” Hannity railed on. “It is based on utter and complete nonsense.”

Of course, Trump has yet to be tried in the Senate, assuming he is impeached by the House. During the investigative phase, those under scrutiny don’t have the rights that Hannity and his master assert. In criminal cases, for example, the police can legally lie to get at the truth and grand juries meet in secret.

Impeachment is a constitutional tool to ensure integrity, a political tool with no requirement for criminal conduct, as Texas lawyer Barbara Radnofsky explains in her brilliant short book A Citizen’s Guide to Impeachment, one of several excellent primers on the process that Trump wishes he could stop.

Trump’s claim, via Hannity, about due process is laughable since Trump refuses to provide evidence subpoenaed by the House. If that evidence is damning rather than exculpatory, it would make sense for Trump to hold it back and then accuse those seeking the facts of wrongdoing, which is what he is doing.

In pure Trumpian terms, Hannity then declared, “Zero violation of any law by the president. All the president is guilty of is faithfully executing the laws of this land and fulfilling his constitutional duty.”

Were that true Trump would embrace the inquiry.

Hannity continued: “What we are living through and witnessing is a level of madness as a country and we better stop or we are not going to have a country and yes, it is that serious.”

Hannity then used more of Trump’s phrases including “shifty Schiff” in reference to Adam Schiff, who chairs the House Intelligence Committee investigation. He repeatedly called the California Democrat “the lying the cowardly and corrupt Schiff.”

When it is convenient, Hannity calls himself an entertainer, not a journalist. In reality, he is the puppet Charlie McCarthy to Trump’s Edgar Bergen, except Hannity never talks back to his master.

Hannity’s enablers, Rupert Murdoch and his son Lachlan, who head Fox, seem just fine with paying $36 million a year to their evening star as he spews lies and fosters thoughts of violence among his millions of followers.

Such loyalty would be inexplicable at a legitimate news organization, where Hannity would have been shown the door long ago. But the Murdochs seem determined to build a reputation for proving the Biblical warning that the love of money is the root of all evil.

The Murdochs should worry that their conduct is promoting actual mob lawlessness.