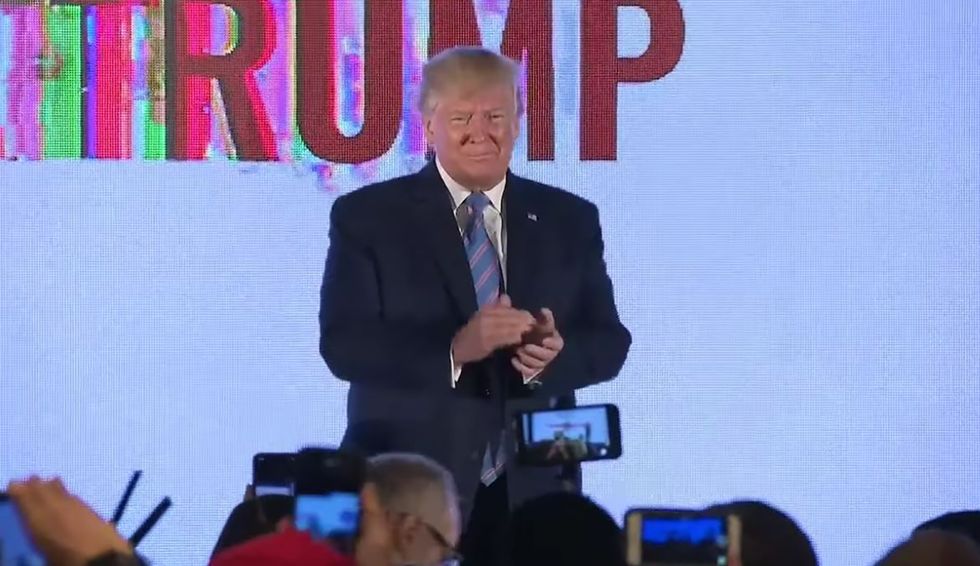 As he inches closer and closer to being impeached President Donald Trump is working hard to secure his base. One of the most powerful organizations at the president’s disposal is Turning Point USA, which is closely tied to the Trump campaign through Trump family members. TPUSA has been described as a “far-right group” which was originally funded by billionaire donor to Republican and Evangelical Christian causes, Foster Friess.

(Friess may be best-known to most Americans as the man who suggested the best birth control for women is “Bayer aspirin between their knees.”)

TPUSA was founded and is headed by Charlie Kirk, who a USA Today opinion writer says “seems to have a fraught relationship with facts when they get in the way of his worshipful approach to President Donald Trump.” The group claims to have “a presence on over 1,500 campuses,” and calls itself “the largest and fastest-growing youth organization in America.”

That’s Kirk in the photo above, interviewing President Trump.

Kirk calls Donald Trump, Jr. “a personal friend,” and the president’s eldest son has often toured with Kirk, speaking at TPUSA rallies. Lara Trump, who is married to the president’s other adult son Eric, is also tied to the group, according to New York Magazine’s Jane Mayer. In December of 2017 Mayer wrote an exposé titled, “A Conservative Nonprofit That Seeks to Transform College Campuses Faces Allegations of Racial Bias and Illegal Campaign Activity.”

Of course, TPUSA may forever be known best for its disastrous attempt to launch into the UK. During a seminar aimed at recruiting new members in London, its then-communications director Candace Owens launched a disturbing attempt to promote the failed concept of nationalism. She was subsequently accused of defending Hitler, after delivering these revolting comments:

“Whenever we say nationalism, the first thing people think about, at least in America, is Hitler,” Owens said, as Buzzfeed reported. “But if Hitler just wanted to make Germany great and have things run well, OK, fine. The problem is that he wanted, he had dreams outside of Germany. He wanted to globalise. He wanted everybody to be German, everybody to be speaking German. Everybody to look a different way. To me, that’s not nationalism.”

In a profile of TPUSA the ADL writes: “TPUSA’s leadership and activists have made multiple racist or bigoted comments and have been linked to a variety of extremists.”

There’s more, of course (see links at the end of the article.)

Despite all this, or perhaps because of it, President Trump Wednesday AM offered up these tweets promoting Turning Point USA and its founder, Charlie Kirk: