Trump made US officials 'cringe' by revealing classified and inaccurate info about Baghdadi operation: report 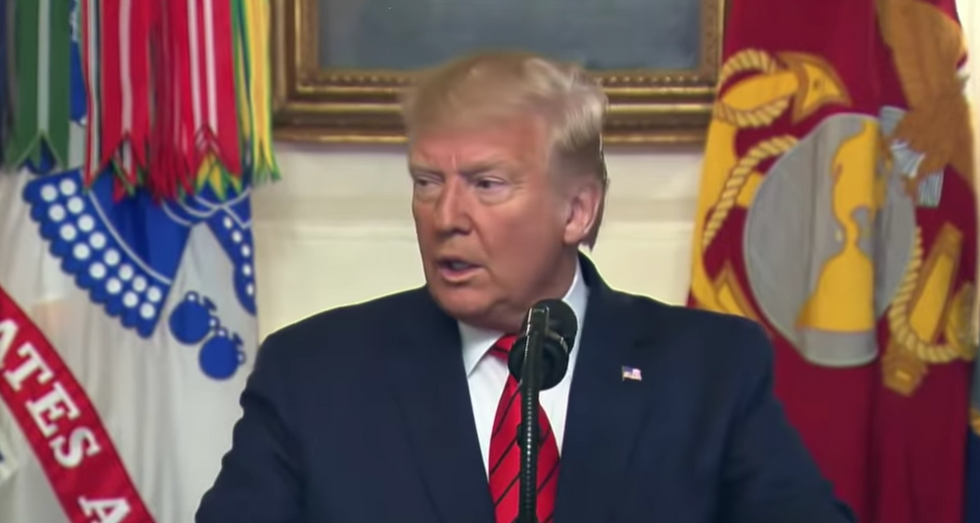 President Donald Trump shared both false and classified information during his announcement of the U.S. operation that killed ISIS leader Abū Bakr al-Baghdadi over the weekend, according to a new report from NBC News.

The report said that U.S. officials told NBC News that they "cringed" when they heard Trump's remarks, which have been widely panned and criticized on other grounds.

Here's what the report said was just flat-out wrong in Trump's remarks:

But beyond Trump's usual trouble with facts, the speech also featured another major failing of the president: a lack of care with classified and sensitive information. As president, Trump has the authority to declassify whatever he wants, but that doesn't mean it's wise or tactically sound. And NBC reported that many of the details Trump revealed in his theatric retelling of the events could backfire and hurt U.S. military and intelligence interests:

Revealing that the U.S. possesses documents about future ISIS plans hurts the military's ability to use that information for quick follow-on operations, officials said. The president's disclosure that the U.S. had taken ISIS fighters from the compound complicated efforts to try to keep ISIS from knowing who is alive or dead for as long as possible while they interrogate them, officials said.

Some of the president's comments could complicate the intelligence gathering that leads to such raids because they revealed sources and methods the U.S. uses, officials said. They pointed to his saying that the U.S. knew of al-Baghdadi's whereabouts via technology, and also knew of the underground tunnels at his compound, which suggests the U.S. has infrared abilities to locate caves and tunnels.

"We knew it had tunnels. The tunnels were a dead end, for the most part. There was one, we think, that wasn't. But we had that covered, too, just in case," Trump said.

Other information Trump discussed provided America's enemies with tactical details on how the military carries out a raid like the one on al-Baghdadi, officials said, including the robot, the helicopter flight patterns and how U.S. forces entered the compound.

None of this should be surprising, of course. This is exactly what we should expect from an egomaniacal, undisciplined, reality TV star who became president. The great irony, of course, is that the 2016 election was largely waged over the phony idea that Hillary Clinton's email use as secretary of state showed her to be unqualified to be president — precisely because it she displayed carelessness with classified information.