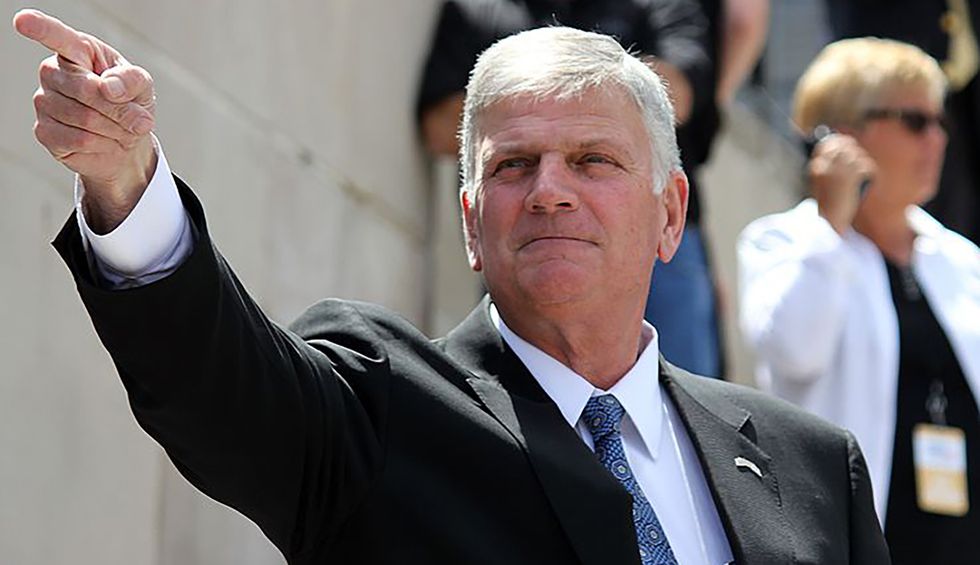 To critics of President Donald Trump — whether they’re liberals and progressives like Rep. Alexandria Ocasio-Cortez and Sen. Elizabeth Warren or right-wing Never Trump conservatives such as MSNBC’s Joe Scarborough and GOP strategists Rick Wilson and Ana Navarro — an impeachment inquiry is an example of the United States’ checks and balances system at work. But to the Christian Right, an impeachment inquiry on the part of House Democrats amounts to an attempted coup d’etat. Trump, regardless of his blatant corruption, is still quite popular among far-right Christian fundamentalists — who have been rushing to his defense and sounding very melodramatic in the process. The fact that Trump, during a July 25 phone conversation, tried to pressure Ukrainian President Volodymyr Zelensky into investigating former Vice President Joe Biden and his son Hunter Biden is irrelevant to Trump’s Christian Right supporters. And no matter how much information comes out about Trump’s July 25 conversation with Zelensky, they are unwavering in that support.

Here are some far-right white evangelicals who have been warning that if Trump’s impeachment continues, there will be hell to pay.

Robert Jeffress, pastor of a Southern Baptist megachurch in Dallas and a prominent activist on the Christian Right, would no doubt have been crying out for vengeance if a Democratic president had asked a foreign president to dig up dirt on a political rival and offered military aid as the reward for doing so. But to fanatics like Jeffress, Trump was sent by God Himself to help the far-right white evangelical movement. And when Jeffress appeared on Fox News’ “Fox and Friends” on Sunday, September 29, he warned, “I do want to make this prediction this morning: if the Democrats are successful in removing the president from office, I’m afraid it will cause a Civil War-like fracture in this nation from which this country will never heal.”

Trump irresponsibly repeated Jeffress’ rhetoric on Twitter, and the well-armed militia group the Oath Keepers — responding to Trump’s tweet — posted, “We ARE on the verge of a HOT civil war. Like in 1859. That’s where we are. And the Right has ZERO trust or respect for anything the left is doing. We see THEM as illegitimate too.”

Franklin Graham, son of the late Billy Graham and an ardent Trump supporter, is insisting that House Democrats are pushing for impeachment because they refuse to accept the results of the 2016 presidential election — a tired GOP talking point. In an early October interview with the Religious News Service, Graham warned, “Our country could begin to unravel if an elected president is thrown out of office because of lies and the media. It could be a devastating thing.”

Graham has no problem with Trump offering a foreign leader military aid in exchange for dirt on Joe Biden and Hunter Biden — an action so egregious that House Speaker Nancy Pelosi, after months of being the Democratic Party’s most prominent impeachment opponent, finally changed her mind.

“This is nothing about nothing,” Graham insisted during the interview. “It’s just a huge distraction. The Democratic Party has refused to accept that (Trump) won the election. All the media and the polls showed he was going to lose, and he won. He should be treated fairly, and he hasn’t been.”

Tony Perkins, president of the Family Research Council, was very pro-impeachment when Barack Obama was president and attacked a GOP-controlled House for not impeaching him. But Perkins, a staunch Trump supporter, is singing a very different tune now that a GOP president is facing an impeachment inquiry. Interviewed on the Family Research Council’s “Washington Watch” radio program recently, Perkins warned that impeachment against Trump “does damage to our system of government that, quite frankly, may never be fixed.”

On a recent blog post, Perkins wrote, “If you want to remove Donald Trump from office, do it the old-fashioned way: win an election.” But when Obama was president in 2014, Perkins criticized the GOP-controlled House for being “too fearful, too politically-minded to impeach this president.” So much for Perkins accepting the presidential election results of 2008 and 2012.

For decades, the Christian Right have been insisting that they have a mandate from God to govern the United States — and even though Trump, according to his former attorney and fixer Michael Cohen, allegedly had extramarital affairs with an adult film star (Stormy Daniels) and a Playboy model (Karen McDougal) and paid them hush money to keep quiet, they view Trump as a staunch ally. One of Trump’s buffoonish white evangelical defenders is Jack Graham, pastor of the Prestonwood Baptist Church in Plano, Texas and a member of Trump’s Religious Advisory Council.

Graham (who formerly served as president of the Southern Baptist Convention) appeared to be weighing in on impeachment and the Ukraine scandal when, on September 29, he tweeted, “When it’s all said and done in this current political attack from the leftists socialists,,,,,, God rules over the affairs of man and government. Who is on the Lord’s side?”

Jack Graham was drawing a line in the sand: good Christians oppose Trump’s impeachment, heathens and heretics support it.