‘There’s nothing to defend’: CNN’s Tapper reveals no one from the Trump administration or GOP leadership was willing to answer questions on Ukraine 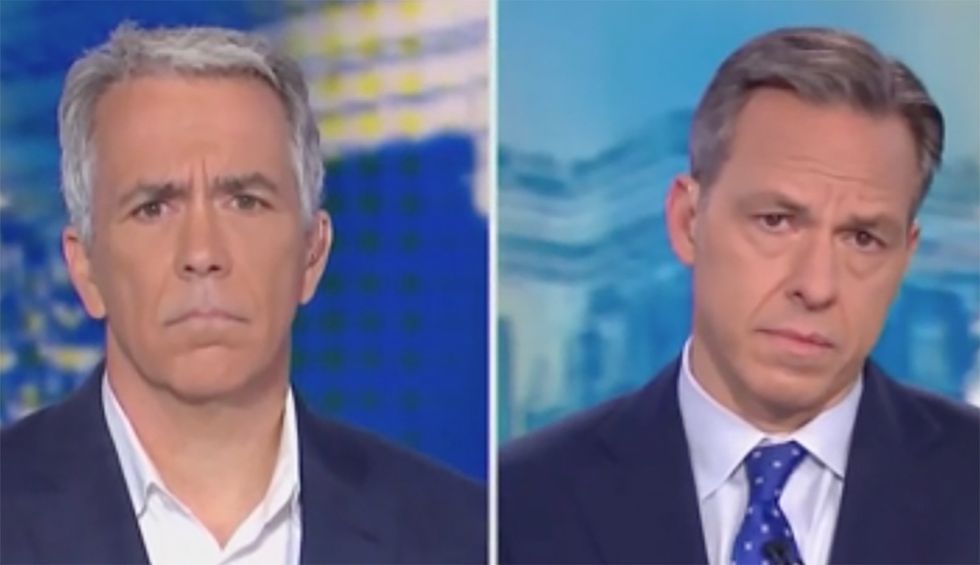 CNN’s Jake Tapper on Sunday revealed that in the middle of one of the defining scandals of Donald Trump’s administration, no one from the president’s administration or Republican leadership was willing to answer questions on “State of the Union.” And, according to former Republican congressman Joe Walsh, the reason is because “there is nothing to defend” of Trump’s actions.

“Confronted with the president’s own words prominent Republicans struggle to come up with ways to dismiss them,” Tapper explained. “After the president attacked one GOP critic will the bulk of his party toe the line?”

Detailing the president’s growing Ukraine scandal, Tapper told his audience “the lawyer for the first whistle-blower now tells me he is also representing a second whistle-blower who has spoken to the intelligence community inspector general,” noting the development “could play into the impeachment inquiry into President Trump” and “is the latest in a stream of new evidence this week backing up the original whistle-blower complaint against President Trump — including, notably, the president’s own public call for not only Ukraine, but for China, to investigate his potential 2020 rival.”

“But perhaps most damning, House Democrats have obtained text messages between three senior U.S. Officials discussing what looks like a quid pro quo, an offer of X in exchange for Y for Ukraine,” Tapper continued. “Including this exchange: ‘Heard from White House, assuming President [Volodymyr] Zelensky convinces Trump he will investigate — “get to the bottom of what happened in 2016,” we’ll nail down date for visit to Washington.’ “

“Or this text from a senior U.S. Diplomat in Ukraine,” Tapper added. “‘As I said on the phone, I think it is crazy to withhold security assistance for help with a political campaign.’”

Then, Tapper laid out just how many Trump supporters declined interviews on “State of the Union” or flat-out refused to respond to requests.

“We invited the White House on to answer questions on the show this morning and they did not offer a guest,” Tapper said. “And we invited both of the president’s personal lawyers Rudy Giuliani and Jay Sekulow and they declined to appear. We invited every member of Senate leadership and House Republicans and they all declined or did not respond. The Trump White House no longer holds regular press briefings or any press briefings at all.”

“And so, on one of the most critical news weeks of the last three years, here are just three of many questions that we feel need to be answered,” Tapper explained. “One, why did senior U.S. Diplomats believe that U.S. military aid was being withheld as a tool to pressure Ukraine to announce an investigation into the Bidens and into attempts to undermine the Mueller investigation? Two, can this White House name another instance, just one, in which President Trump personally pushed a foreign leader to investigate an American citizen who was not one of his political opponents? Three, would you think it entirely appropriate for a democratic president to use the power of his or her office to demand foreign governments conduct investigations into Republicans and their families? As always, the invitation for an official to answer these questions stands.”

Walsh, who is challenging Trump for the 2020 Republican nomination, later told Tapper the reason people declined to speak with “State of the Union” is simple.

“With all due respect, this president deserves to be impeached,” Walsh said. "No one from the White House or high-level Republicans are on the show today because there is nothing to defend. This president betrayed his country again this week. Would I vote if I were in Congress on the inquiry? There is enough we know now to vote to impeachment this president. He stood on the White House lawn this week, Jake. and told two additional foreign governments to interfere in our election. That alone is impeachable. This is a strong term I’m going to use but I’m going to say it on purpose, Donald Trump is a traitor. Now I know there is a lot of talk about treason. People on both sides, Jake, have been irresponsible using that word ‘treason.’ I’m not accusing this president of treason. Our founders were very specific as to what treason is. But when you look at traitor more broadly defined, this president betrayed our country again this week. And it is not the first time he did it. Excuse me. I don’t know that we should move forward incrementally. This president needs to be impeached just based on what he himself has said and Republicans better get behind that.”