Right-wing columnist blasts the GOP for standing by Trump: 'Conservatives have sold their souls for the sheer pleasure of partisan hatred' 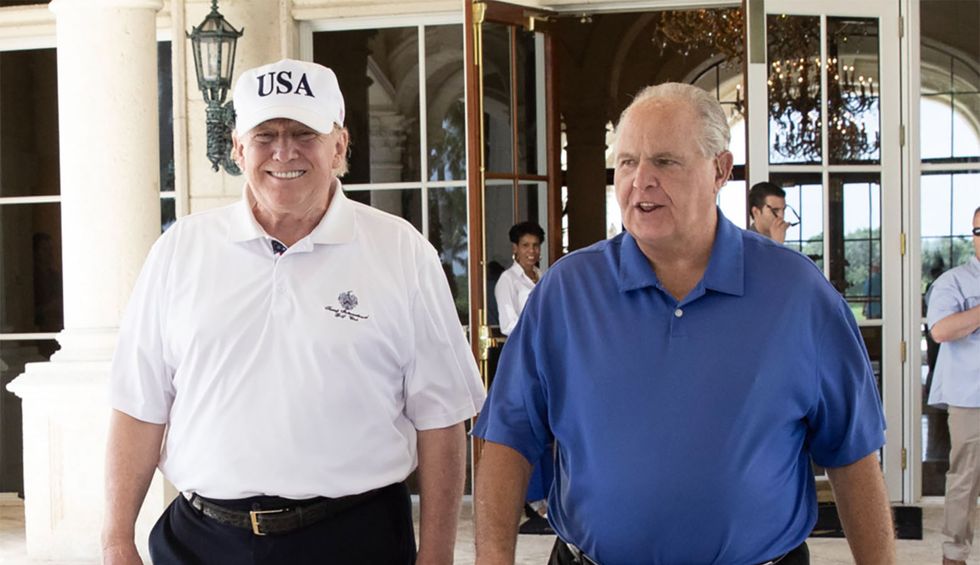 The Bulwark, launched in December 2018 by two Never Trump conservatives —Charles Sykes and neocon Bill Kristol — has become a go-to website for anti-Trump commentary and reporting on the right. And The Bulwark’s Robert Tracinski, frustrated that so many Republicans continue to reflexively defend President Donald Trump, poses a question in an article posted this week: “Is this the idol to whom conservatives have decided to sell their souls?”

Tracinski, in his piece, makes an argument that MSNBC’s Joe Scarborough and GOP strategist Rick Wilson have often made: that Trump has blatantly violated so many conservative principles, from foreign policy to federal deficits. And one of the pro-Trump right-wingers he takes aim at is talk radio host Rush Limbaugh.

“If you want to see the process by which a soul is corrupted,” Tracinski writes, “consider the case of Rush Limbaugh, the talk show host who became an icon of small-government conservatism — back before he decided that spending and deficits don’t matter.”

Tracinski recalls that in 2006, when George W. Bush was president and Democrats recaptured the U.S. House of Representatives, Limbaugh told listeners he felt “liberated” because he would no longer have to “carry the water for people who I don’t think deserve having their water carried” — that is, Republicans who had caused the United States’ federal deficit to soar. And in 2019, Tracinski writes, Limbaugh is now carrying Trump’s water in the Ukraine scandal.

“That Limbaugh is being a complete hypocrite is a trivial observation,” Tracinski asserts. “If a Democratic president had been caught doing this, of course Limbaugh would be screaming for his impeachment with equal volume and ferocity. What is more interesting is the rationale he offers: a simple appeal to hatred of the opposition — as a justification, as an inducement, as an end in itself.”

But the fact that Trump isn’t a Democrat, Tracinski stresses, doesn’t make him a good president. And Limbaugh, he adds, is typical of all too many Republicans who are more interested in partisanship than conservative principles.

“Conservatives have sold their souls for the sheer pleasure of partisan hatred,” Tracinski laments. And it’s not going to be easy to break this spell.”

Tracinski also lambasts Sen. Lindsey Graham in his piece, noting that as much of a Trump sycophant as he has become, he was “left out of the loop” when Trump decided to withdrawn U.S. troops from Syria.

“But why should Trump have consulted Graham?,” Tracinski asks. “He’d already sold his soul. He’d already indicated that he will back Trump no matter what; so, why should Trump bother to inform him about future compromises that will be required? This is where everyone will end up eventually.”

Tracinski writes that in 2020, the result of Republicans “selling their souls” to Trump might be the election of Sen. Elizabeth Warren as president. And if that happens, he asserts, Republicans will have no one but themselves to blame.

“Conservatives have been drawn from small compromises to bigger and bigger ones, from venal sins to mortal ones,” Tracinski emphasizes. “There is no bottom to it. That is the inevitable logic of selling your soul.”