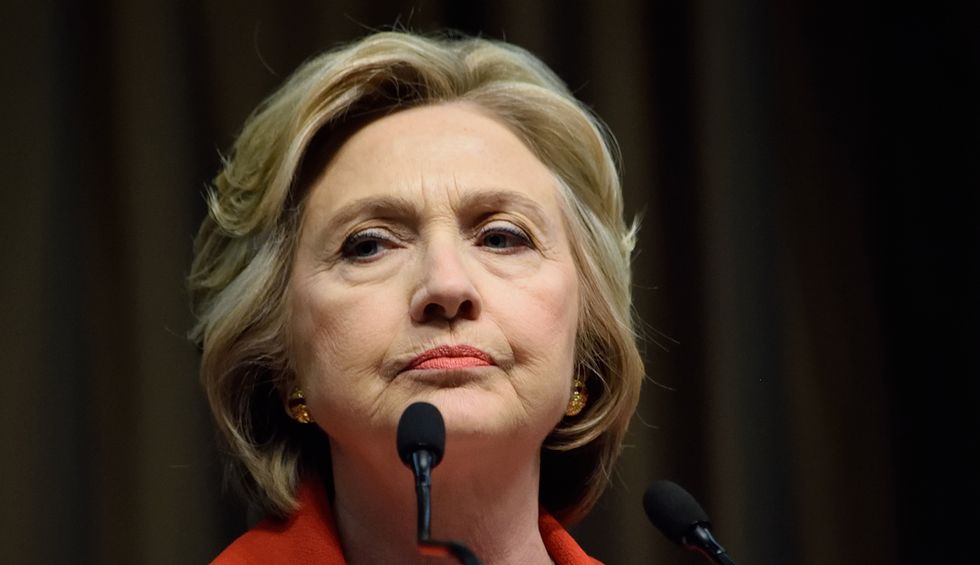 After the last rites are solemnly pronounced over what Americans once called “democracy,” the New York Times will undoubtedly be one of its chief pallbearers.

Somehow the Editorial department at the Times thought it would be wise to run as its lead Editorial a piece basically acknowledging that the Hillary Clinton “email” fiasco--which it relentlessly highlighted in the run-up to the 2016 election--was the largest non-issue in political history; that there was no intentional or nefarious wrongdoing whatsoever on the part of the Clinton campaign; and that the whole story was pretty much a right-wing, hysterically hyped farce.

And they had the temerity (some might say, "gall") to title the piece "But Her Emails..." which is the exact phrase used by those who've criticized and mocked the inordinate coverage of this issue by media outlets such as the Times.

For those interested, the article essentially tries to justify and reinforce the idea that "something was amiss," with Hillary Clinton's treatment of her emails, but then quickly pivots to the now-perpetual malfeasance of the entire Trump regime. Nice dodge, there, on the Times'  part.

If you haven’t exhausted your “free articles” for the month, feel free to click on the Times link above. Or if you don’t think this institution deserves any money after what they’ve done to destroy our country, you may just want to click on an alternative, bootleg link, like I did.

First, some brief background on the infamous “email” controversy. From Wikipedia:

It all seems kind of quaint now, doesn’t it? A controversy over the “security classification” of a few emails, where the current president of the United States is credibly suspected as being a Russian asset and, along with every other member of his administration, regularly, habitually thumbs his nose at the Constitution, blithely defying and violating every institutional practice, security-related or otherwise, on the books?  It’s amazing how that Overton Window got moved so quickly, isn’t it?

Well, way back then, it was enough to tilt an election:

The controversy was a major point of discussion and contention during the 2016 presidential election, in which Clinton was the Democratic nominee.

That’s an understatement by Wikipedia. But they clear it up later, and this is the important part:

Analyses by Columbia Journalism Review, the Berkman Klein Center for Internet and Society at Harvard University, and the Shorenstein Center at the Harvard Kennedy School show that the Clinton email controversy received more coverage in mainstream media outlets than any other topic during the 2016 presidential election.[6][7][8] The New York Times coverage of the email controversy was notoriously extensive; according to a Columbia Journalism Review analysis, "in just six days, The New York Times ran as many cover stories about Hillary Clinton's emails as they did about all policy issues combined in the 69 days leading up to the election (and that does not include the three additional articles on October 18, and November 6 and 7, or the two articles on the emails taken from John Podesta)."[6] In attempting to explain the lopsided coverage, the Columbia Journalism Review speculates, "In retrospect, it seems clear that the press in general made the mistake of assuming a Clinton victory was inevitable, and were setting themselves as credible critics of the next administration."[6]

So the Times was all in it for themselves, to position their organization as such noble, virtuous guardians of democracy. They fancied themselves to be a check on any imagined abuse of power by “those Clintons.” They were going to keep us informed. Real “credible critics,” that was the plan.

Well they fucked up. Bigly. As in--possibly the most consequential fuckup in journalistic history, even outdoing their partisan cheerleading for the disastrous war on Iraq.  And all Americans are now being forced to live through the end result of their grotesquely misdirected hubris.

They may just have destroyed the future of this country with their “noble” arrogance. They certainly didn’t help things.

So while normally I would quote the lead editorial of the Times, particularly as it reflects their wholesale incompetence (or deliberate malfeasance, and it’s really hard to tell) about their coverage of Hillary Clinton’s “emails,” I won’t.

I really don’t want to allow them even the satisfaction of acknowledging the extent of their disgrace.