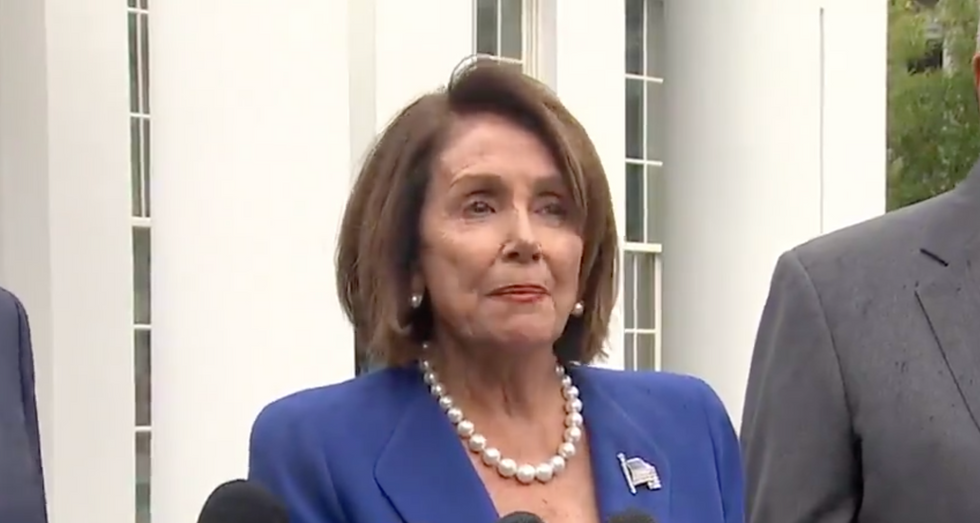 House Speaker Nancy Pelosi and Senate Minority Leader Chuck Schumer detailed a contentious meeting with President Donald Trump on Wednesday afternoon in remarks to reporters outside the White House, painting a disturbing picture of his behavior and mental state. They were also joined by House Majority Leader Steny Hoyer.

"What we witnessed on the part of the president was a meltdown," Pelosi said.

Schumer said Trump went on a "nasty diatribe" during the meeting, attacking Pelosi in particular. He called her a "third-rate politician," Schumer said. These remarks came apparently despite the fact that she had made history by becoming the first woman to be House speaker in U.S. history and despite his previously endorsing her in her bid for the speakership. “She’s fought long and hard, she’s a very capable person, and you know, you have other people shooting at her trying to take over the speakership," he said in November.

“It was not a dialogue," Schumer said of the meeting on Wednesday. "It was a diatribe.”

Schumer said that despite the president's insults, Pelosi "kept her cool completely."

At one point, they said Trump told them that some members of ISIS are communists and added, "You guys might like that."

But despite Trump's apparent fury, the impeachment inquiry — which has clearly deeply gotten under his skin — wasn't a topic of discussion, Pelosi said.

The House speaker added that Trump was "very shaken up" because the House agreed with a huge 354-60 bipartisan vote — with two-thirds of Republicans joining the Democrats — to condemn the president's recent decision directing U.S. forces to abandon the American Kurdish allies. That decision triggered widespread outrage in Congress, including from Senate Majority Leader Mitch McConnell. The Democrats called on McConnell to take up the House's resolution of condemnation and pass it in the Senate.