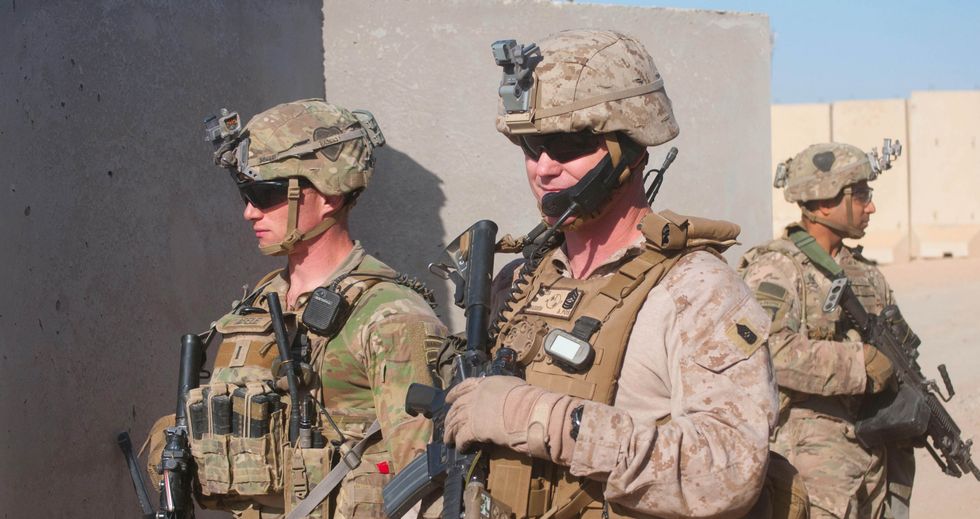 Capping off a week of widely criticized comments from members of the Trump administration about emerging White House plans to use U.S. troops to control oil fields in northeastern Syria, Defense Secretary Mark Esper confirmed Friday that the Pentagon is working to "strengthen" U.S. military presence in the region.

Using an acronym for the Islamic State group, Esper said during a press conference in Brussels Friday that "we are now taking some actions... to strengthen our position at Deir al-Zor, to ensure that we can deny ISIS access to the oil fields." The defense secretary disclosed that such actions will include sending some kind of armored vehicles.

Esper did not disclose how many U.S. troops are currently in northeast Syria—following a withdrawal of some personnel in the region due to a Turkish incursion—or how many more forces will be deployed to guard the region's oil fields. However, Newsweek reported Wednesday, citing an unnamed senior Pentagon official,

that the United States is seeking—pending White House approval—to deploy half of an Army armored brigade combat team battalion that includes as many as 30 Abrams tanks alongside personnel to eastern Syria, where lucrative oil fields are under the control of a mostly Kurdish force involved in the U.S.-led fight against the Islamic State militant group (ISIS). The Pentagon-backed militia, called the Syrian Democratic Forces and dominated by the Kurdish People's Protection Units (YPG), will continue to be involved in securing these oil fields, the official said.

Friday's press conference came after Esper said Monday that the Pentagon was considering keeping U.S. forces near the oil fields to help the SDF "deny access, specifically revenue, to ISIS and any other groups that may want to seek that revenue to enable their own malign activities," and President Donald Trump said Wednesday that a "small number of U.S. troops will remain in the area where they have the oil."

Trump has framed the withdrawal of some U.S. troops in northeast Syria earlier this month that enabled a deadly Turkish incursion targeting the region's Kurdish population as part of his supposed effort to end "endless wars" and claimed that he "saved the lives of many, many Kurds" by negotiating a "ceasefire."

Notably, Esper's press conference Friday happened in the same hour that Trump tweeted: "Oil is secured. Our soldiers have left and are leaving Syria for other places, then [...] COMING HOME! We were supposed to be there for 30 days—That was 10 years ago. When these pundit fools who have called the Middle East wrong for 20 years ask what we are getting out of the deal, I simply say, THE OIL, AND WE ARE BRINGING OUR SOLDIERS BACK HOME, ISIS SECURED!"

Juan Cole, a professor of Middle Eastern and South Asian history at the University of Michigan, pointed out Friday in an op-ed partly titled "New War for Oil?" that "Trump goes back and forth between dismissing Syria as an unimportant desert and playing up its small oil reserves."

Cole argued that "the notion of a U.S. invasion and occupation of Deir al-Zor is entirely illegal in international law. The U.S. has no grounds for militarily occupying part of Syria after it withdrew from another part. Washington also has no grounds for denying Syrian oil resources to the Syrian government."

International human rights activist Ajamu Baraka wrote on Twitter Friday morning that "Democrats have criticized Trump's growing imperial presidency for three years but I am finding it hard to find voices of opposition to his illegal desire to keep U.S. troops in Syria to steal Syrian oil and gas. Is this silence another example of bipartisan support for imperialism?"

However, Trump and Esper's comments throughout the week, along with reporting on the Pentagon's plans, have provoked some strong critiques from progressive politicians and anti-war activists.

"There's no justification—legal or otherwise—to deploy U.S. troops in Syria to hold Syrian oil fields," Kate Kizer of the U.S. advocacy group Win Without War tweeted Wednesday, warning that "this will only put U.S. troops in harm's way and increase the likelihood of conflict with the Syrian regime and Russian or Iranian forces."

Rep. Barbara Lee (D-Calif.) wrote on Twitter Wednesday that the president doesn't have the authority to have troops in Syria for any reason, and that "protecting oil is not a mission and only increases our chance of conflict in the region."

"Reminder that Congress has never authorized deploying troops in Syria to protect their oil fields," the Congressional Progressive Caucus tweeted Thursday, linking to Newsweek's report. "This is dangerous and unconstitutional."