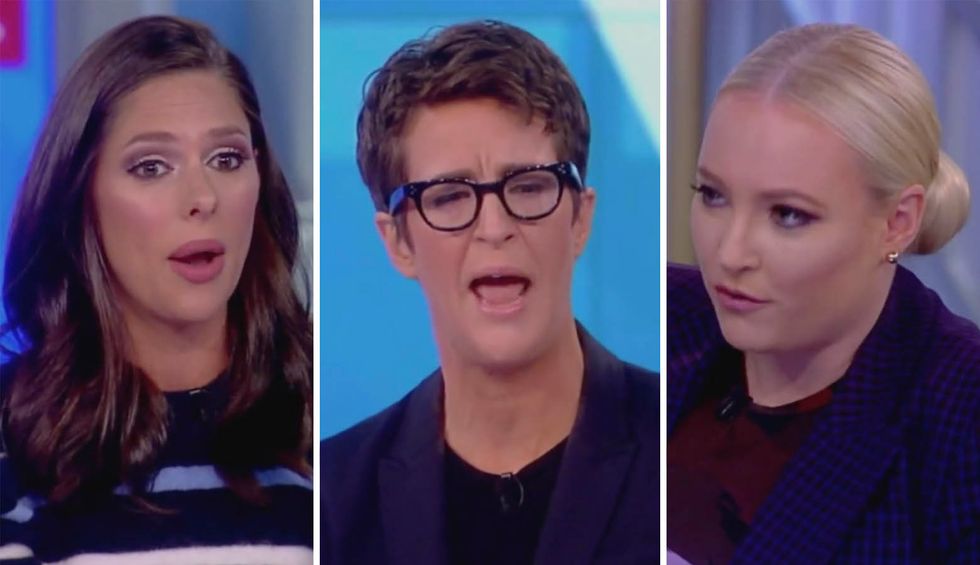 The Ukraine scandal and House Democrats’ decision to move forward with an impeachment inquiry against President Donald Trump has been a prominent topic on ABC’s “The View,” and MSNBC’s Rachel Maddow jumped into the debate with co-hosts Meghan McCain, Abby Huntsman, Joy Behar and Whoopi Goldberg during a guest appearance on Wednesday.

Although the conservative McCain shares the disdain that her late father, Sen. John McCain of Arizona, had for Trump, the Republican activist is often quick to attack Democrats on the ABC talk show. And on Wednesday, McCain and Huntsman were critical of House Intelligence Committee Chairman Adam Schiff’s role in the impeachment inquiry — insisting that Schiff lacks credibility because he is a partisan Democrat.

Echoing GOP talking points, McCain asserted, “I keep saying that Adam Schiff is the wrong person to do this because if we are going to go forward with impeachment, it needs to be as clean and look as nonpartisan as possible.” And McCain went on to ask Maddow if Schiff’s actions, “muddy the case.”

Maddow, in response, explained, “Whistleblowers come forward all the time to the House Intelligence Committee, which is run by Democrats — also to the Senate Intelligence Committee, which is run by Republicans. And both of those committees have now said, ‘Yeah, this happens all the time, and we always do the same thing — which is that we have them speak with a staffer, and then, the staffer tells them to get a lawyer and file a whistleblower complaint.’”

Maddow added, “On the House side, they say this happens two or three times a month. This is just a normal thing.”

McCain pressed on, however, asking Maddow if she thinks Schiff’s involvement “muddies the waters” — to which the MSNBC host responded, “No, I don’t. I also feel like this focus on who the whistleblower is and how the whistleblower’s complaint was handled — both by the Republicans and Democrats — is a side story.”