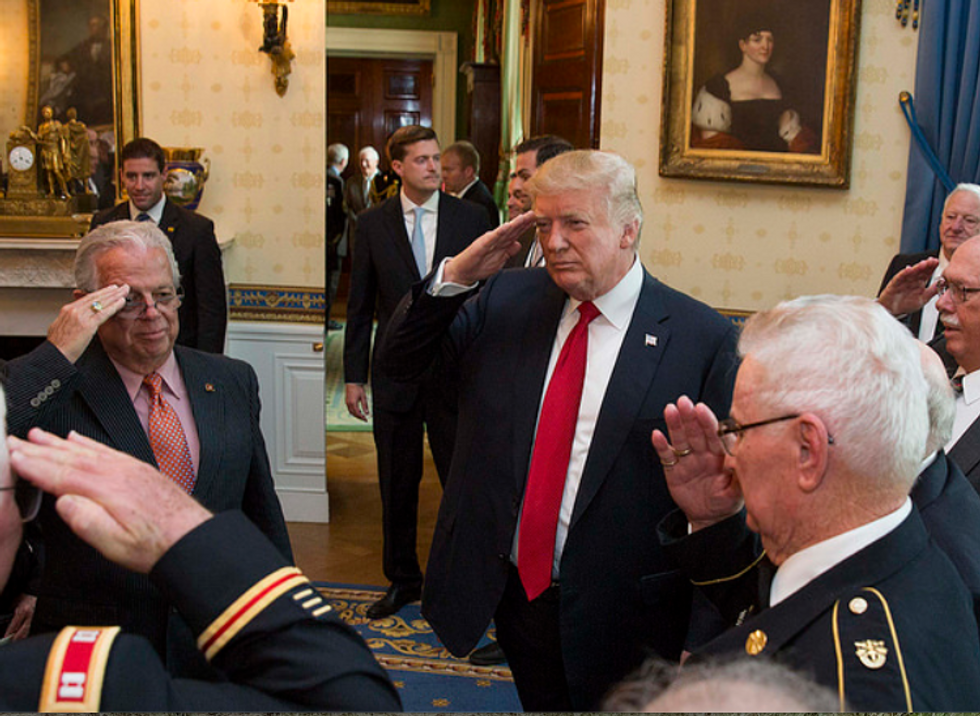 President Donald Trump set off yet another controversy on Twitter when, on September 29, he echoed the rhetoric of far-right evangelical wingnut Robert Jeffress and tweeted, “if the Democrats are successful in removing the president from office, which they will never be, it will cause a Civil War-like fracture in this nation from which our country will never heal.” Although Trump’s irresponsible tweet has drawn widespread condemnation, the armed militia group the Oath Keepers applauded the tweet and posted, “We ARE on the verge of a HOT civil war. Like in 1859.” And intelligence expert Patricia Ravalgi, in an October 6 op-ed for the Daily Beast, contemplates how the U.S. military would respond if a civil war did, in fact, break out in the United States in response to Trump’s impeachment.

Trump is now facing an impeachment inquiry in the U.S. House of Representatives because of the Ukraine scandal and a whistleblower’s revelation that during a July 25 phone conversation, Trump tried to pressure Ukrainian President Volodymyr Zelensky into digging up dirt on former Vice President Joe Biden and his son Hunter Biden. If the House does end up indicting Trump on articles of impeachment, he would face a trial in the U.S. Senate.

Ravalgi spent 19 years working intelligence-related jobs in Washington, D.C. — including jobs at the FBI and the U.S. Department of Homeland Security (DHS) — before working for United States Central Command (CENTCOM) in Tampa, Florida. And she is troubled by the fact that after Trump posted his civil war-related tweet, the hashtag #CivilWarSignup and the phrase “Civil War” started trending on Twitter.

“In the modern era,” Ravalgi writes, “real civil wars have been the great affliction of Third World countries — conflicts that split nations and societies along political, ethnic or religious fault lines. They are very often accompanied by martial law and resolved by military intervention. Is this what the president has in mind? Where would the U.S. military stand in such a situation? A view from the inside indicates the armed forces are as divided as the rest of the country — and divided is a dangerous place for the U.S. military to find itself.”

Ravalgi observes that Trumpism has infiltrated the military, including “deep state” conspiracy theories.

“The constant drumbeat of right-wing conspiracy theories and hateful political rhetoric has found its way into a sizable portion of the U.S. military’s rank and file,” Ravalgi  warns. “Not too long ago, the majority of those serving in the military would have identified themselves as Reagan Republicans. But just as that brand of Republicanism has been replaced by Trumpism among civilian Republicans, so too has it seeped into the armed forces — and by these standards, even Ronald Reagan would be viewed as a socialist.”

I have visited nations ravaged by civil war. @realDonaldTrump I have never imagined such a quote to be repeated by… https://t.co/OdQseHJDVA
— Adam Kinzinger (@Adam Kinzinger) 1569808758.0

Ravalgi goes on to say that “support for Donald Trump among a large segment of the U.S. military is downright cult-like” — which she says “doesn’t make sense” to her because “Trump is everything the U.S. military should despise: a draft dodger, adulterer, flabby, lazy, unread, a tabloid joke for decades, and TV reality show star.”

To critics of Trump, the impeachment inquiry led by House Democrats is a prime example of checks and balances at work. But to Trump devotees and the alt-right, it is an attempted coup d’etat by Democrats and the “deep state” — and Ravalgi is worried about people in the military who buy into such conspiracy theories.

“The belief that there is indeed a coup being orchestrated against President Trump is a weapon Trump has in his arsenal, depending how far down the road to authoritarianism he decides to go,” Ravalgi observes. “But Trump would need to deeply fracture the military first, and that is something to watch for. Most members of the armed forces are honorable, patriotic Americans who would never take part in such a scheme, despite their support for Trump. But a significant portion just might.”