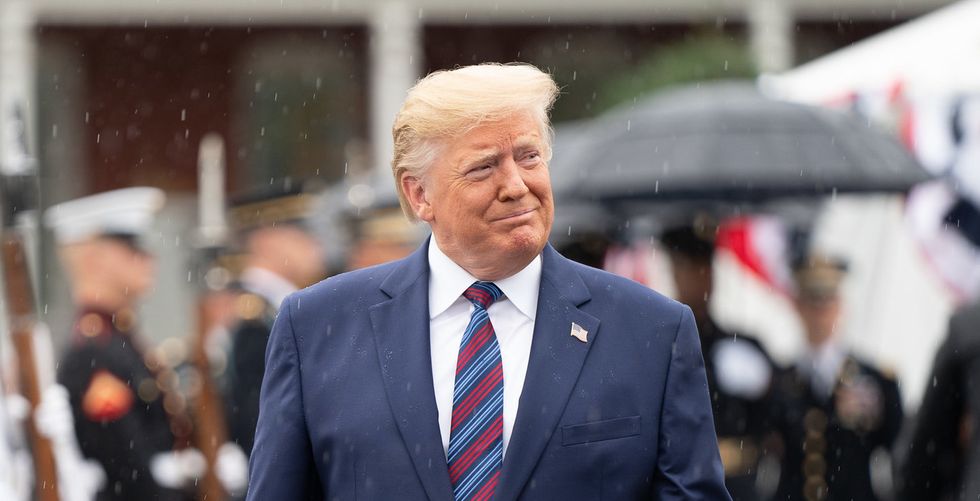 Openly colluding with a foreign government to dig up dirt on his political opponent, while offering up the assistance of the Department of Justice. Freezing U.S. foreign aid to make sure the overseas dirt gets dug. Hiding transcripts of presidential calls on secret servers in hopes of covering up the collusion. Publicly threatening to expose the collusion whistleblower, insinuating that he or she should be executed. Urging that a Democratic member of Congress be arrested for treason. The list of horrendous Donald Trump transgressions uncovered in the past week stretches on and on, as the pressure of an impeachment inquiry intensifies and the unhinged president denounces Democratic election officials as "savages" while warning of a looming civil war if he's removed from office.

All of this comes on the heels of two years of open Trump corruption, hush money payments, and a nonstop attack on the U.S. intelligence community. Yet to date, just one American newspaper editorial board has looked at the shocking Ukraine scandal and concluded that Trump ought to step down for the good of the country.

"The proper next step for the president is clear. He should resign," the editorial board of the Connecticut Post recently concluded. "He has repeatedly proven himself unfit for office and appears to view the presidency as a position meant to benefit himself personally, not as one that must represent the interests of an entire nation."

The time is now for more newspapers to use their public platforms to call for Trump to resign. It's time for news outlets to use their bully pulpits to make the case for a return to the rule of law in the executive branch. And it's time for newspapers to grow a spine, because yes, scores of dailies used that same public platform to demand that Bill Clinton resign during the impeachment proceedings of the late 1990s.

"He should resign because he has resolutely failed — and continues to fail — the most fundamental test of any president: to put his nation's interests first," USA Today announced in September 1998.

It's incomprehensible how those newspapers looked at the consensual affair Clinton had with Monica Lewinsky and concluded the Democrat was "unfit for office," yet have watched Trump brag about trying to corrupt the 2020 election and remain mum on his fitness to serve. This, after Trump has already advertised himself as a racist and a habitual liar who's busy lining his pockets while serving in the Oval Office.

It's hard to imagine a more naked double standard than how newspaper editorial boards treated Clinton and how they treat Trump, and how the press treats Democrats versus how they treat Republicans. It's all deeply ironic: Newspapers declared a wildly popular Democratic president unfit for office, yet the same newspapers refuse to demand that a wildly unpopular (and corrupt) Republican president step down for the good of the country.

Demands for resignation certainly would not force Trump from office. But clarion calls would help change the national debate and more accurately reflect the crisis our country faces with a pathological liar at the helm.

More irony: For weeks and months, many pundits lectured Democrats about not having the guts to do the right thing and start impeachment proceedings against a crooked president. Now Democrats have, and newspapers are the ones sitting on the sidelines—and on the wrong side of history. That loud condescending voice of moral indignation that rained down on Clinton? That's been replaced by curious timidity. And my hunch is that it has a lot to do with the struggling newspaper industry and its fear of losing subscribers that happen to be angry Republican readers. Note that former New York Times editorial writer Sarah Jeong recently tweeted, "NYT does pay attention to subscriber cancellations. It’s one of the metrics for 'outrage' that they take to distinguish between 'real' outrage and superficial outrage."

Is that what's holding them back? A Washington Post editorial last week labeled the Trump-Ukraine phone call a "devastating indictment of the U.S. President," while an unsigned Times editorial stressed, "This board has made clear its own view of Mr. Trump’s unfitness for his office." So why not call for his resignation?

Recently, the St. Louis Post-Dispatch published an editorial that tiptoed up to the resignation line. Instead of making a clear demand, the editorial suggested that Republicans convince Trump to step down for the good of the country. Of course, that's a political fantasy, as Republican members of Congress are instead scrambling to protect Trump. The idea that the GOP is going to suddenly embrace a fact-based look at the engulfing scandal just isn't realistic.

I can hear some howls of protest: “Trump hasn't been convicted of anything, so it wouldn't be right to demand that he resign!” Well, Clinton hadn't been convicted of anything either when dozens of newspapers ordered him out of office. There were, for instance, The Philadelphia Inquirer ("Bill Clinton should resign. He should resign because his repeated, reckless deceits have dishonored his presidency beyond repair") and The Atlanta Journal-Constitution ("A president more concerned with the national interest than his own preservation would realize that resignation is his only responsible option").

Meanwhile, the newspapers’ reluctance to demand Trump’s resignation would be understandable if the enveloping Ukraine collusion scandal had been a lightning-bolt allegation out of the blue, striking a president with an otherwise pristine record of public service. If that were the case, I could see holding off to see where all this is going. But, good grief, these are credible and urgent allegations about a president who has run the White House as an ethical cesspool.

The continued silence sounds more and more like political cowardice.