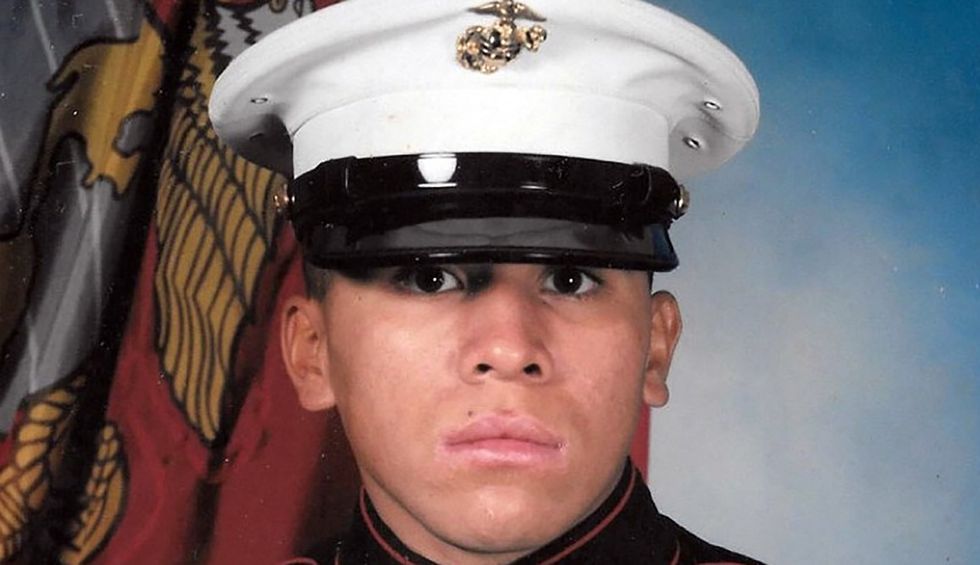 He served five years – two tours – in Iraq. He is a decorated Marine Corps combat veteran. He has a large tattoo of the Statue of Liberty spread across the left side of his body, and another tattoo memorializing his service to the U.S. Marines, according to The Orange County Register.

He was honorably discharged in 2004, one year after suffering a brain injury.

And President Donald Trump’s Immigration and Customs Enforcement agency (ICE) just deported him – reportedly without warning – to El Salvador, a country he has not lived in since he was three years old.

His name is Jose Segovia-Benitez. He is 38-years old.

“Generally, what ICE will do is they will notify the person so the person can make arrangements.,” Petty said. Instead, they “woke him up and put him on a plane.”

Petty says his client does not speak fluent Spanish.

“Gangs target former U.S. military,” he told the Phoenix New Times. “They’ll kidnap a person, they may hold a person for ransom, they may torture an individual.”

Segovia-Benitez was diagnosed with post-traumatic stress disorder in 2011, seven years after he was discharged. And reportedly there were some issues.

The Hill reports “after he was discharged from the military, Segovia-Benitez began to self-medicate with alcohol, his family said, which led to trouble with authorities. He ended up having to serve time in prison for a variety of crimes, including assault with a deadly weapon and injuring a spouse, for which he received an 8-year prison sentence.”

His family believes the federal government did not properly care for the decorated combat vet with a brain injury.

“If Jose had died over there,” in Iraq, Brandee Dudzic, the head of Repatriate our Patriots, told The Orange County Register, “we would all be talking about Jose the American soldier who was willing to give his life for his country. He didn’t die. He just got hurt.”

“At some point, he was the American hero. But then he became a guy from El Salvador,” Dudzic said. “At what point did he lose his label?

“We dressed him up in our flag,” Dudzic continued. “At what point does that go away? I think it’s because he’s no longer useful. I think that’s the story of all deported vets. And then we can throw them away like garbage.”