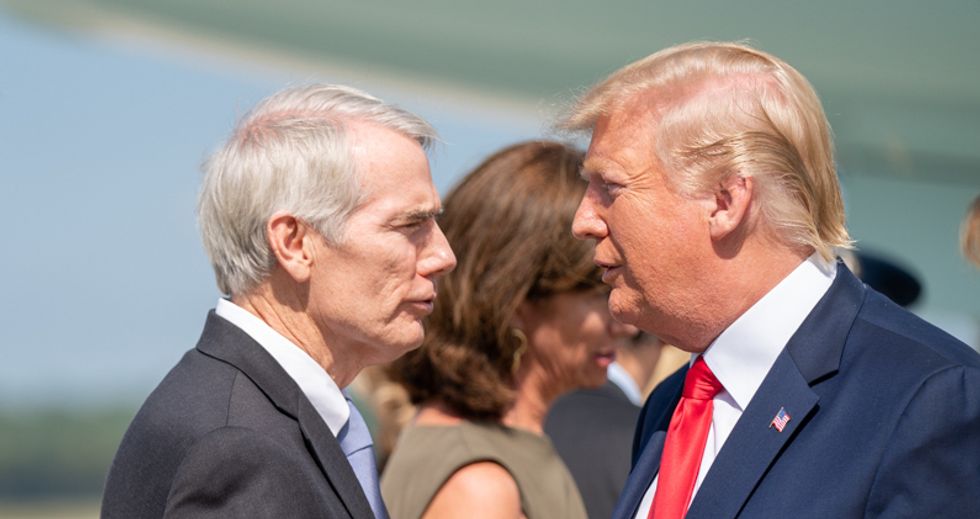 Republican Sen. Rob Portman of Ohio came out Monday with some of the strongest criticism yet of President Donald Trump from within his own party in the midst of the Ukraine scandal, as the Columbus Dispatch reported.

An impeachment inquiry of the president has revved up since it was revealed that Trump has been pressuring Ukraine for months, including in a July 25 phone call with President Volodymyr Zelensky, to investigate former Vice President Joe Biden.

“The president should not have raised the Biden issue on that call, period. It’s not appropriate for a president to engage a foreign government in an investigation of a political opponent,” Portman said in the new comments on Monday.

However, he made it clear he wasn't calling for impeachment.

“I don’t view it as an impeachable offense," the Ohio senator said. "I think the House frankly rushed to impeachment..."

The only Senate Republican to criticize Trump more forcefully was Utah's Sen. Mitt Romney, who tweeted last week: "By all appearances, the President’s brazen and unprecedented appeal to China and to Ukraine to investigate Joe Biden is wrong and appalling."

Portman's remarks are particularly awkward for the president, because just last week, Trump was citing the Ohio senator in his own defense. As Trump has drawn criticism for withholding military aid to Ukraine, potentially as part of his effort to induce the country to investigate Biden, the president claimed: “Rob Portman backed me up, and there’s nobody more honorable than Rob Portman of Ohio."

He said that Portman was among the group of people who called him to release the aid to Ukraine in September, which he eventually did. Cinncinnati.com reported that a Portman spokeswoman confirmed the president's claim. However, this fact doesn't actually undermine the accusation that Trump was dangling an improper quid pro quo at all.

In his comments Monday, Portman seemed to be suggesting that there was, in fact, no quid pro quo with Ukraine and that this was why he views the new push for impeachment as overreach by the Democrats. But House Speaker Nancy Pelosi, among others, have been clear that it isn't necessary to establish a quid pro quo — Trump's pressure on Ukraine to investigate Biden was an egregious enough abuse of power to justify impeachment on its own. Regardless, though, texts from State Department employees show that there was at least one clear quid pro quo with Ukraine and strong evidence for others.

Portman's argument that, though Trump's actions are bad, they aren't impeachable, also falls flat. This is in part because Trump won't apologize or admit that he was wrong. In effect, then, he is still applying pressure on Ukraine, and he threw China into the mix as well even after he got caught. How else can Congress respond to a president who won't stop abusing his power except by impeachment?

Finally, though he doesn't outright say it, the Ohio senator did seem to give some tacit endorsement of the impeachment inquiry in his remarks. He said that investigations of the president's conduct are warranted, and "Congress has an oversight role."