From Nixon to Trump: Here's how ideologues and partisans seized the Court 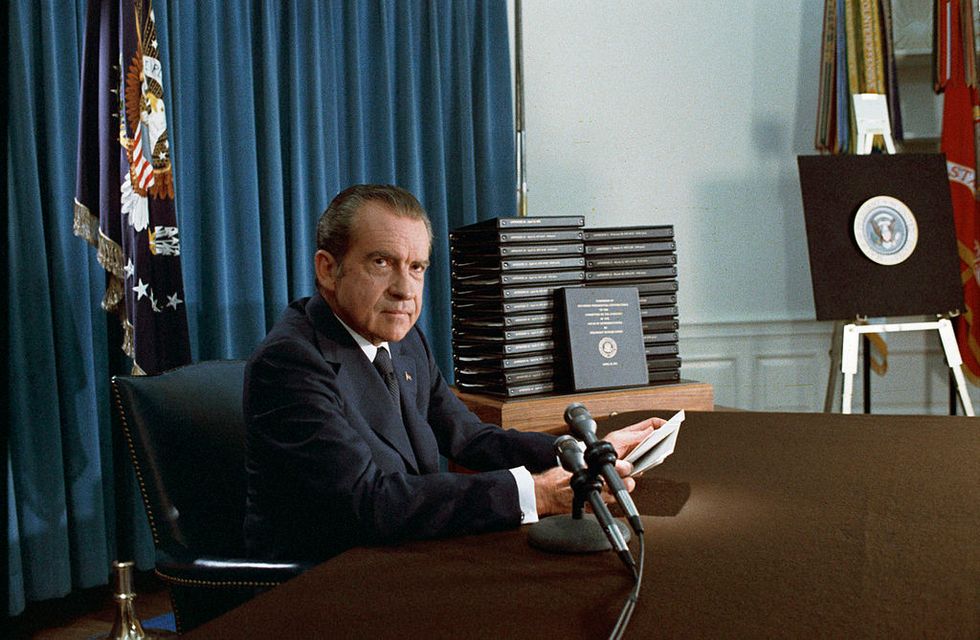 After Brown v. Board and its subsequent supporting decisions in the 1950s, and Roe v. Wade in 1973, Republicans concluded that they needed to curb—or seize—the power of the Court. The easiest way to do that would be to have as many Republican presidents in the White House as possible, as each could potentially nominate new conservative justices to the Court.

In 1968, Richard Nixon stole the presidential election, scuttling President Lyndon Johnson’s Vietnam peace talks and setting up four GOP appointments to the Supreme Court. In that, he set a precedent for every Republican president since: do whatever it takes to win an election, even if that means committing treason or attacking the very core of American democracy, voting, in order to control who’s on the Supreme and other federal courts.

In the spring and summer of 1968, President Johnson was trying to work out a tentative peace deal between North and South Vietnam. There was one final meeting to be held in October of that year in Paris before the peace deal would be announced.

The Vietnam War had made LBJ so unpopular that senior members of his own party sat him down and told him that he couldn’t successfully run for reelection. Vice President Hubert Humphrey would run instead.

Humphrey was a Midwestern New Deal Democrat. He’d served three terms in the Minnesota State Senate and two terms representing Minnesota in the US Senate; prior to that, he’d been a political science professor, served as mayor of Minneapolis, worked in FDR’s Works Progress Administration, and founded the Minnesota Democratic-Farmer-Labor (DFL) Party (which is still a major force in Minnesota politics). After JFK’s assassination, LBJ became president, and he picked Humphrey as his VP; together they won in a landslide in 1964.

But by 1968, Vietnam had turned public opinion against both men, and Humphrey needed the war behind him to beat Nixon in November’s election. LBJ was on the job.

But Nixon found out that Johnson had an October surprise planned—the Vietnam peace deal. If LBJ pulled it off, and particularly if he gave a lot of the credit to his vice president, Humphrey would almost certainly become the next president of the United States.

Americans didn’t learn about this until 50 years after LBJ’s death when the LBJ Presidential Library released hundreds of tape recordings of Johnson’s presidential phone calls. Among them was a series of calls between Johnson and various people discussing, explicitly, Nixon’s efforts to sabotage the Vietnam peace plan.

Everett Dirksen, with his grave demeanor and deep, gravelly voice, was the most well-respected and powerful Republican in the Senate at the time. He’d already been the Senate minority leader for a decade when LBJ called him about Nixon’s plot. Here’s a partial transcript:

President Johnson: [S]ome of [Nixon’s] folks, including some of the old China Lobby, are going to the [South] Vietnamese embassy and saying, “Please notify the President [of South Vietnam] that if he’ll hold out till November the 2nd they could get a better deal.”

President Johnson: Now, I’m reading their hand, Everett. I don’t want to get this in the campaign.

President Johnson: And they oughtn’t to be doing this. This is treason.

Senator Dirksen: I know. . . . Wherever they are, I’ll try to get a hold of them tonight.

Dirksen was unsuccessful in stopping Nixon, and Nixon even had the gall to call LBJ and deny that he was doing what he was doing. The tapes make for grim listening.

While there are many ways our republic would probably be different today had Nixon not committed treason to get elected in 1968, the most consequential has been the Supreme Court.

Without Nixon, Lewis Powell may never have been on the Court. Powell’s enduring Court legacy will be how he helped big money take over our government as the guiding force behind the 1976 Buckley v. Valeo and First National Bank of Boston v. Bellotti cases. Followed by Citizens United in 2010, they essentially handed our elections over to the highest bidders.

Reprinted from The Hidden History of the Supreme Court and the Betrayal of America with the permission of Berrett-Koehler Publishers. Copyright © 2019 by Thom Hartmann.

Thom Hartmann is a progressive national and internationally syndicated talk show host. Talkers magazine named him America's most important progressive host and has named his show one of the top ten talk radio shows in the country every year for over a decade. A four-time recipient of the Project Censored Award, Hartmann is also a New York Times bestselling author of twenty-four books, translated into multiple languages.