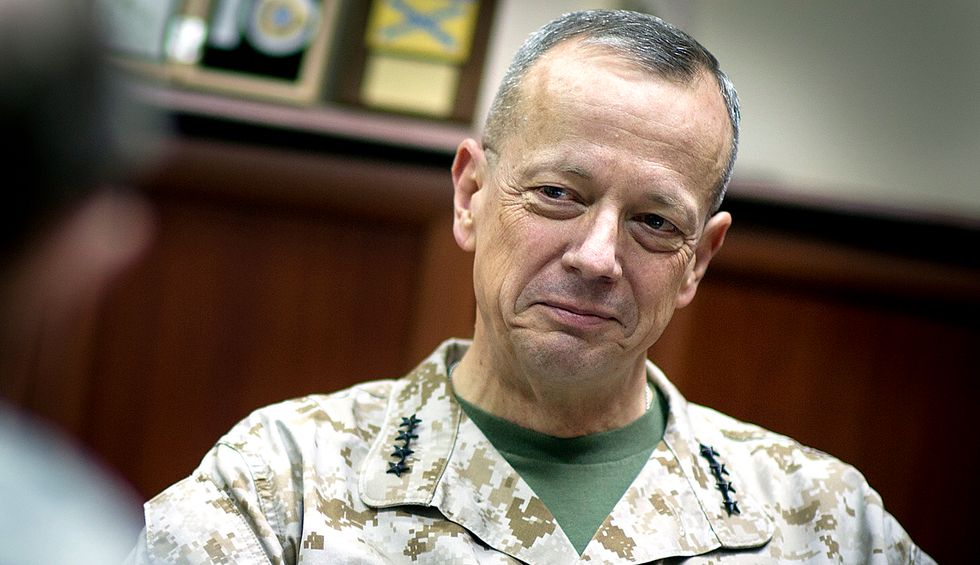 President Donald Trump is being lambasted by both Democrats and Republicans for withdrawing U.S. troops from northeastern Syria and leaving Kurdish forces to fend for themselves. And some of the sharpest criticism is coming from military veterans, including retired Marine Gen. John Allen — who stressed to CNN during an interview on Sunday that no good can possibly come from Trump’s decision.

“There is blood on Trump’s hands for abandoning our Kurdish allies,” the four-star military veteran told CNN. Previously, Allen served as commander of U.S. forces in Afghanistan and was a special presidential envoy for the Global Coalition to Counter ISIS under President Barack Obama.

The U.S., by withdrawing from northeastern Syria, has “greenlighted” the violence that its Kurdish allies will suffer at the hands of Turkish forces under the direction of President Recep Tayyip Erdogan.

“There was no chance Erdogan would keep his promise, and full-blown ethnic cleansing is underway by Turkish-supported militias,” Allen lamented. “This is what happens when Trump follows his instincts, and because of his alignment with autocrats.”

Allen told CNN that while he predicted a bloodbath in northeastern Syria if U.S. forces pulled out, things are proving to be even worse than he predicted.

“I said there would be blood, but could not have imagined this outcome,” Allen asserted.

In northeastern Syria, Kurdish forces have been guarding captured ISIS fighters. And with the Turkish military’s incursion into that area following U.S. troops withdrawal, critics of Trump’s decision are fearing that the terrorist group ISIS (Islamic State, Iraq and Syria) will be revitalized.

Allen fears that the chaos in northeastern Syria will only get worse, and he denounced Trump’s offer of $50 million in aid to Syria as “hollow.”

“Who’s going to administer [the aid], and for whom?” Allen told CNN. “Hundreds of thousands are fleeing, and the relief agencies are on the move.”