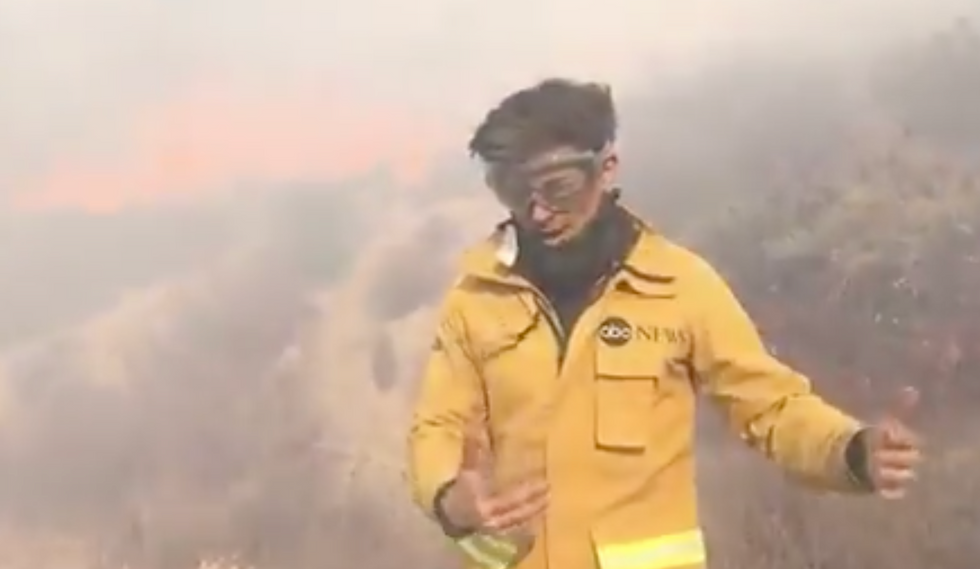 With wildfires raging across California on Wednesday—and with portions of the state living under an unprecedented "Extreme Red Flag Warning" issued by the National Weather Service due to the severe conditions—some climate experts are openly wondering if this kind of harrowing "new normal" brought on by the climate crisis could make vast regions of the country entirely uninhabitable.

Lack of rain coupled with powerful Santa Ana winds in the state, some gusting with hurricane-level force, have left officials warning residents in many communities that the worst is yet to come even as firefighters already report being stretched to the max.

Reflecting on the current and recent devastating fires in California, climate activist Bill McKibben wrote in an op-ed for The Guardian Tuesday that what the state has been experiencing "starts to feel like the new, and impossible, normal" for both residents and victims as well as those witnessing the destruction from afar.

Citing an article in the San Francisco Chronicle published Tuesday—which described how the fires had "intensified fears that parts of California had become almost too dangerous to inhabit"—McKibben wrote: "Read that again: the local paper is on record stating that part of the state is now so risky that its citizens might have to leave."

Writing for The Atlantic, journalist Annie Lowery detailed the dynamics leading increasing numbers of people to believe the state has become "unlivable":

Wildfires and lack of affordable housing—these are two of the most visible and urgent crises facing California, raising the question of whether the country’s dreamiest, most optimistic state is fast becoming unlivable. Climate change is turning it into a tinderbox; the soaring cost of living is forcing even wealthy families into financial precarity. And, in some ways, the two crises are one: The housing crunch in urban centers has pushed construction to cheaper, more peripheral areas, where wildfire risk is greater.

The state's "housing crisis has exacerbated its wildfire crisis, and its wildfire crisis has exacerbated its housing crisis," explained Lowery, and that "vicious cycle is nowhere near ending."
For many critics, the state's largest utility PG&E remains a chief corporate culprit in the mess. As Common Dreams has reported, the company's failure to adequately respond to the increased fire dangers—choosing to reward investors and seek profits instead of making the kind of changes and safety investments that communities and experts have demanded.

Meanwhile, as the following Now This video details, the scenes created by the California wildfires in recent weeks depict a hellscape fueled by the climate crisis—the scale and destruction of which fulfill some of the dire warnings scientists have been making for years:

The devastating California wildfires are exactly what climate scientists warned us about https://t.co/NZqWSRydbC
— NowThis (@NowThis)1572447780.0

In response to the video, climate activist group Friends of the Earth declared: "Thanks to the climate crisis, this is the new normal in California. To save lives, communities and wildlife, we must #ActOnClimate."

After a new fire broke out in Simi Valley on Wednesday, fire crews spent the day protecting—among other homes and structures—the Ronald Reagan Presidential Library.

"The progress is so extraordinary. This is why they called it an extreme fire danger." .@mattgutmanABC reports on… https://t.co/lPQ0aMZMvA
— ABC News Live (@ABC News Live)1572464961.0

Speaking to Democracy Now! on Tuesday, Leah Stokes, assistant professor of political science at the University of California, Santa Barbara criticized the corporate media for ignoring the role of the climate crisis in the fires and explained that the scientific research about what's happening in California is crystal clear.

In California, the threat to residents and wildlife as well as the loss of property has been devastating. As The New York Times reported Tuesday:

California's catastrophic wildfires have not discriminated between rich and poor. In recent years tens of thousands of people lost their homes, from trailer parks to mansions. But the aftermath of the fires has produced a spectrum of misery and recovery, ranging from the wealthy, who with insurance money rebuilt houses sometimes worth more than the ones that burned, to those who lost everything and years later still have nothing.

Like access to quality education and clean water, natural disasters are another prism through which California's vast income inequalities can be viewed.

A lawyerly knowledge of the peculiarities of the insurance industry, a pool of savings to fall back on, and the time and grit to deal with the state's labyrinthine regulations have helped some in California bounce back from the infernos. Others have not been so lucky.

For example,  44-year-old Gina Wheeler, "lost her uninsured trailer that she rented on family land" in the Camp Fire that devastated Paradise, California and the surrounding area late last year.

"Every place I've ever set foot in has been touched by fire," Wheeler told the Times. "I don't think anybody that's not gone through this will ever, ever understand what it's like to lose your entire community."

"I can't even describe the empty feeling that we have," she said. "I talk friends and family members out of suicide, and they talk me out of it."

Jenn Wilcox, who worked at a residential care facility in Paradise and lost the uninsured cabin where she lived, has also struggled in the year since the fire. "I'm a refugee," she said. "I'm broke."

This week, PBS aired its one-hour documentary, titled "Fire in Paradise," which details what happened on November 8 of last year as the flames ripped through the California town. While the community was not unfamiliar with the threat of wildfires—and having done more than most, local officials claimed, to prepare for such an emergency—the episode details just how quickly the strength of the fire overwhelmed detailed evacuation plans and made fighting the flames an impossible task.

At the conclusion of the film, Capt. Matt McKenzie, a member of California Fire Station 36, offers an ominous warning in the context of what the people of Paradise suffered that day and what scientists say are conditions across the country that will make wildfires more frequent and more ferocious in the decades ahead.

"Everything was perfect that day for a massive, destructive incident to do what it did and it's in place everywhere—everywhere in California, Arizona, Nevada, Washington Oregon," McKenzie says. "And you don't even wanna think about what's next. Can it be worse than that? And the answer is: Yes."

In his op-ed, McKibben said the idea that California may one day be a place where fewer and fewer people can live should come "as no real surprise" to anyone who has been paying attention to global trends and the warnings of scientists.

"My most recent book, Falter, centered on the notion that the climate crisis was making large swaths of the world increasingly off-limits to humans," McKibben wrote. "Cities in Asia and the Middle East where the temperature now reaches the upper 120s—levels so high that the human body can't really cool itself; island nations (and Florida beaches) where each high tide washes through the living room or the streets; Arctic villages relocating because, with sea ice vanished, the ocean erodes the shore."

Speaking with USA Today, Beth Fulton, a resident of Sebastopol who was evacuated this week from her town as the Kincade Fire approached, said more and more people are decided to leave the area and never come back.

"People are naturally resilient, but to deal with this year after year can be traumatizing," Fulton said. She explained that several people who lost their homes in previous fires moved off to New Mexico and Oregon.

"This seems like it'll be a yearly thing," she said, "and some people say, 'I've had enough.'"