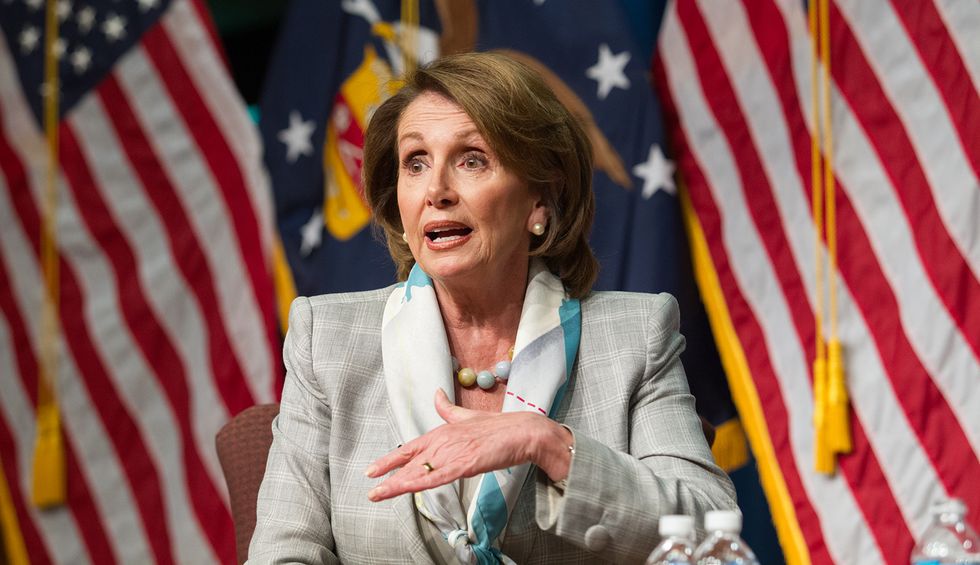 As House Democrats zero in on abuse of power as their main article of impeachment, Speaker Nancy Pelosi released a "fact sheet" outlining Democrats' framework for explaining the impeachment case against Donald Trump to the American people.

"President Trump has betrayed his oath of office, betrayed our national security and betrayed the integrity of our elections for his own personal political gain," the document states, according to The Hill. The fact sheet includes three categories—the shakedown, the pressure campaign, and the cover up—that pertain to the role Trump and several of his top officials played in attempting to extort Ukraine and then cover their tracks.

The shakedown is focused entirely on the contents of Trump's July 25 call with Ukrainian President Volodymyr Zelensky, citing his now infamous ask of Zelensky: "I would like you to do us a favor though."

The pressure campaign details the players that worked to help Trump advance his "scheme to undermine our 2020 elections" to his advantage. The fact sheet notably asserts that "Vice President Pence is entangled in this scandal," as well as Secretary of State Mike Pompeo, and Ambassadors Gordon Sondland and Kurt Volker, both of whom have testified behind closed doors. According to publicly released text messages between Sondland, Volker, and Bill Taylor (who testifies Tuesday), Trump "waged a months-long" campaign to extort Ukraine using a potential White House presidential visit and military aid as leverage. The section begins with Taylor's telling objection to the efforts in those text exchanges: "I think it's crazy to withhold security assistance for help with a political campaign."

The cover up keys in on key elements of the original whistleblower complaint and the fact that they are borne out by the rough transcript of the call released by the White House. It cites the complaint calling Rudy Giuliani "a central figure" in Trump's scheme and suggesting that Attorney General William Barr might also be involved. The fact sheet notes the whistleblower's concern that Trump's actions "pose risks to U.S. national security" and undermine the government's efforts to secure the 2020 elections. This section also mentions the efforts of senior White House officials to "lock down" all records of the phone call by putting them on a special electronic system normally reserved for highly-sensitive information.

By placing most of their focus on Trump’s Ukraine scandal, Democrats hope to simplify the corruption narrative for the American public. But by making abuse of power their main article of impeachment, observers say they’re trying to wedge Republicans into a tight spot. Former Florida Republican David Jolly told MSNBC Monday that he found it difficult to believe someone like Utah Sen. Mitt Romney would be able to vote against that article. Former Justice Department spokesperson Matt Miller agreed.

“They're not playing for impeachment,” Miller said of Democrats, “they're playing for removal from office.”