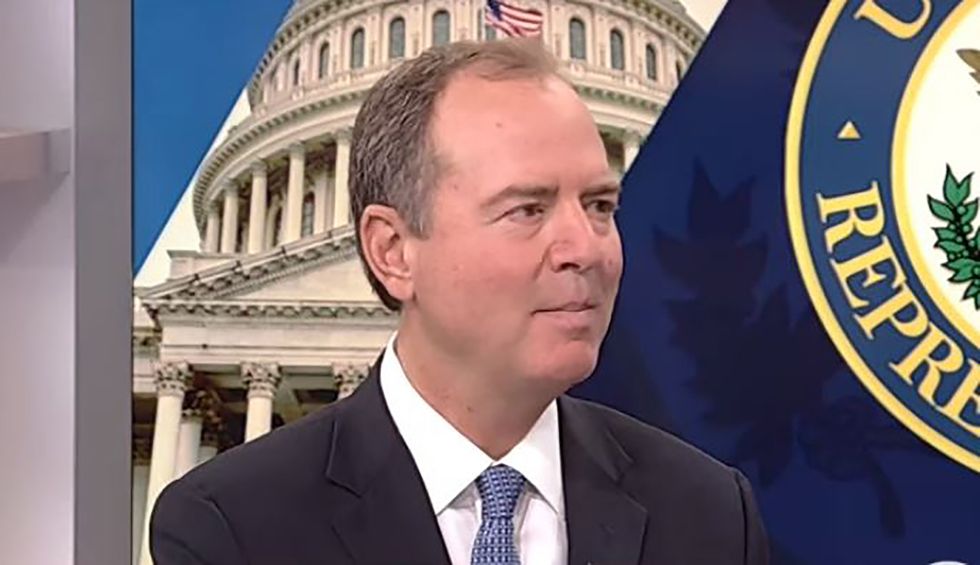 Although it's hard to imagine Donald Trump being any more dim than he already is, Democrats are working toward that very goal even as they gain more insights into Trump’s extortion of Ukraine through the impeachment inquiry.

House Intelligence Committee Chair Adam Schiff said Sunday on Face the Nation that Democrats' goal was to keep Trump and his aides from altering their stories in order to fit the narrative of people testifying under oath in the inquiry. “We want to make sure that we meet the needs of the investigation and not give the president or his legal minions the opportunity to tailor their testimony and in some cases fabricate testimony to suit their interests,” the California Democrat said, according to Bloomberg News.

Schiff compared the current probe to a grand jury and said that Democrats may call certain witnesses back for public testimony, but that the original whistleblower might never appear since the evidence is more pertinent than that person's original complaint. Maintaining the whistleblower's anonymity amid Trump's withering attacks has become a key priority for Democrats.

“We’re keeping our focus right now on the president’s coercion of an ally, that is Ukraine, to create these sham investigations into his political opponent,” Schiff explained. “Here we have a president of the United States abusing his power to the detriment of our national security and doing so to get yet another foreign country to intervene in our election. It’s hard to imagine more of a corruption of his office than that.”

Republicans have criticized Democrats for conducting the interviews behind closed doors. “I believe that sunshine is the best disinfectant,” said Rep. Doug Collins of Georgia, the ranking GOP member on the House Intelligence panel.

Collins will likely end up getting more sunshine than he claims to want once Democrats have all the evidence and lay it out for the American people to see. It appears at least some of that evidence will be coming in the form of public testimony.