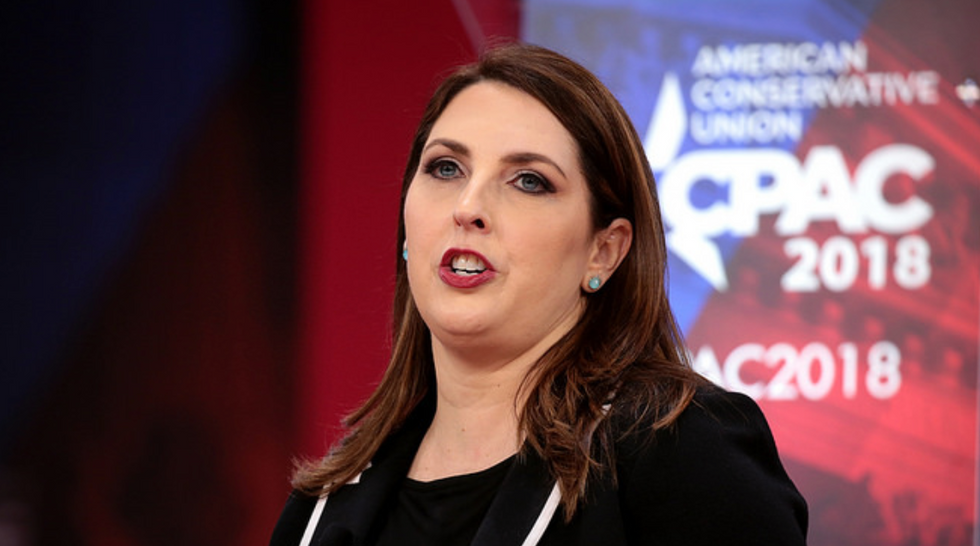 Hunter Biden has faced scrutiny for his involvement with a Ukrainian oil company while his father served as vice president, who conducted diplomacy in the region. Hunter Biden gave something of a defense of his actions in a new interview with ABC, though he conceded he showed "poor judgment" by working with foreign companies while his father was in office.

McDaniel pilloried Hunter, but in doing so, she opened herself up to predictable accusations of hypocrisy:

Let me get this straight… Hunter Biden got $50K a month from a Ukrainian energy company, despite having ZERO exper… https://t.co/GpDzVZUnGj
— Ronna McDaniel (@Ronna McDaniel) 1571149873.0

Of course, people were quick to point out that McDaniel herself had undeniable family connections to power:

It also became clear that, though the GOP appears to be barreling forward with an anti-nepotism line for the 2020 campaign, such an argument can easily backfire. Hunter Biden's family name and connections to power almost certainly were the reason he had access to cushy and lucrative jobs, and this status quo is certainly objectionable on its own. But the problem is widespread in American society — and Hunter is far from the most egregious example. The most notable example is President Donald Trump himself — who is wealthy only because of his father's achievements — and his own children working in the White House and at the top of the Trump organization.

As NBC News' Vaugh Hillyard pointed out, Trump himself has previously explicitly defended his own nepotism:

And while there's been no proof that, in addition to the troubling fact of Hunter Biden profiting off his connections, the Bidens were actually involved in outright corruption, the Trump family's conflicts of interest and opportunities for corruption are myriad. While Ivanka Trump and her husband Jared Kushner work in the White House, jobs they obviously only have because of their family ties to the president and an apparent loophole in anti-nepotism laws, they have been profiting from their own international business dealings. Trump himself and his sons Eric and Don Jr. have, too, been profiting internationally during the Trump presidency as well, creating a vast web of conflicts of interest that are not yet fully understood. And that doesn't even account for all the ways Trump uses government funds to funnel money to himself through his businesses as president.

And while McDaniel wanted to focus on Hunter Biden, she has heaped praise on Ivanka, despite the fact that she occupies an inherently more corrupt position obtained through even more blatant nepotism:

She even praised Ivanka while attacking to Rep. Alexandria Ocasio-Cortez — despite the fact that the New York Democrat earned her place in Congress through aggressive campaigning, rather than riding on a famous family name: