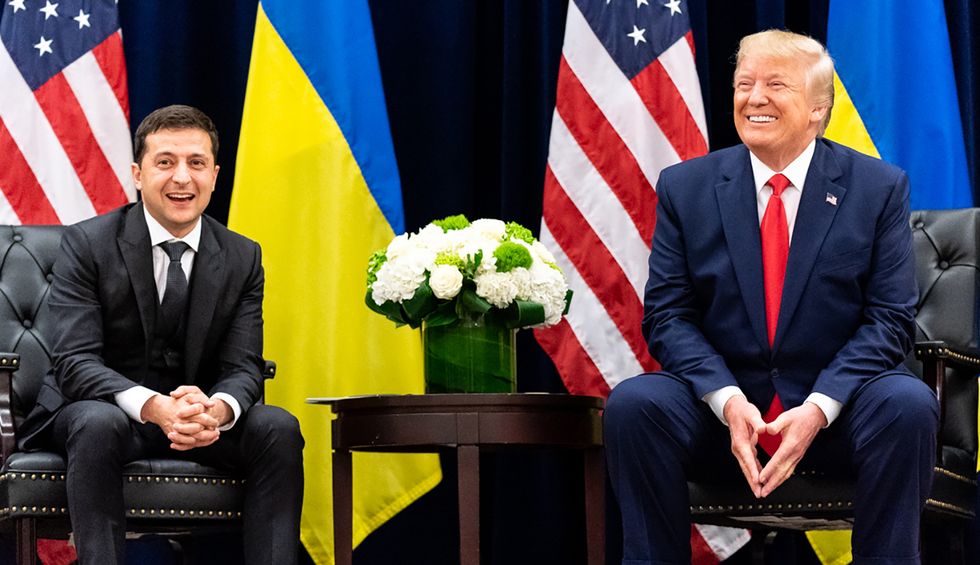 As the impeachment inquiry led by House Democrats moves along at a rapid pace, Republican defenders of President Donald Trump continue to insist that he did nothing wrong during his now-infamous July 25 conversation with Ukrainian President Volodymyr Zelensky — and that Trump and his personal attorney, former New York City Mayor Rudy Giuliani, have been promoting a perfectly legitimate probe of foreign interference in the 2016 U.S. presidential election. But the “foreign interference” that some Trump supporters are thinking of isn’t Russia interfering to help Trump, but Ukraine interfering to help Democratic nominee Hillary Clinton. And conservative writer Noah Rothman tears apart that debunked and discredited conspiracy theory in an October 23 article for Commentary Magazine, explaining how it has influenced Trump’s foreign policy.

Although Rothman is right-wing politically, he considers that conspiracy theory “the fringiest of lunatic rabbit holes.” But some conspiracy buffs, Rothman notes, take it seriously — including Trump.

“The theory goes something like this: CrowdStrike, a cybersecurity firm that helped the FBI investigate the 2016 hack into (Democratic National Committee) e-mail accounts, is owned by a wealthy Ukrainian — it’s not; the company’s co-founder is a Russian-born U.S. citizen,” Rothman explains. “The digital imaging of the DNC hard drives deliberately hid evidence that Ukraine, not Russia, was the party behind the infiltration of Democratic communications networks. To hide its nefarious deed, the firm absconded with the DNC’s hardware, spiriting it off to Eastern Europe — where it would entomb all the nastiest secrets of the president’s enemies.”

The notion that Ukraine rather than Russia interfered in the 2016 presidential election, Rothman adds, has been debunked by the U.S. Department of Justice (DOJ) and former special counsel Robert Mueller.

“To believe this theory,” Rothman observes, “you must discount all the available evidence, including the findings and indictments handed down by Robert Mueller’s investigation, which confirmed in exhaustive detail how the Russian-led interference operation was conducted. But that’s precisely what Trump believes.”

Earlier this week, diplomat William Taylor (Trump’s ambassador to Ukraine) mentioned Trump’s belief in “Ukrainian interference in the 2016 U.S. election” when he testified before Congress during a closed-door hearing. And Trump’s willingness to let a goofy conspiracy theory influence U.S. foreign policy, according to Rothman, is one of the most troubling aspects of the Ukraine scandal.

“The president certainly attempted to use access to the White House as a pry bar in furtherance of this conspiracy theory,” Rothman asserts. “He likely, according to the sworn testimony of his ambassador, dangled life-saving military assistance to Ukraine in that effort. This is no longer a petty, domestic political scandal, but an assault on vital U.S. strategic interests abroad.”