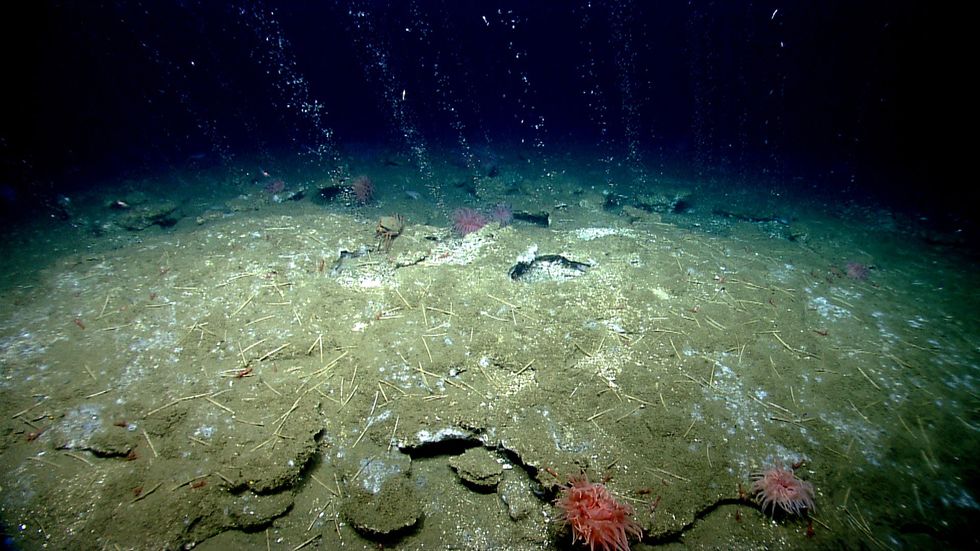 A spectacular image of methane bubbles rising above a cold seep site. Methane bubbles flow in a small stream out of the sediment on an area of seafloor offshore Virginia north of Washington Canyon. Quill worms, anemones, patches of bacterial mat, pandalid shrimp, and a large red crab (Chaceon quinquedens) can be seen in and along the periphery of the seepage area.
Jessica Corbett
and
Common Dreams
October 09, 2019

Scientists studying the consequences of methane emissions from underwater permafrost in the Arctic Ocean announced this week that they found a 50-square-foot area of the East Siberian Sea "boiling with methane bubbles."

"This is the most powerful seep I have ever been able to observe," lead scientist Igor Semiletov said Monday, using a term for methane gas bubbling up from the seafloor to the surface. "No one has ever recorded anything similar."

Semiletov, a Russian researcher who has participated in 45 Arctic expeditions, set out on the Academic Mstislav Keldysh last month, accompanied by scientists from the United Kingdom, the United States, Italy, the Netherlands, and Sweden.

Their discovery was announced in a statement from Russia's Tomsk Polytechnic University, where Semiletov is a professor. The researchers' findings from the expedition and Semiletov's remarks were translated and reported on Tuesday by The Telegraph.

Permafrost is a mix of soil, rocks, and sand bound together by ice that stays frozen for two or more years straight. As human activity causes global temperatures to rise, the world's permafrost is thawing—releasing ancient bacteria and viruses as well as greenhouse gases such as carbon dioxide and methane that further heat the planet.

Compared with carbon dioxide, methane has a shorter lifetime in the atmosphere but is better at trapping radiation, so methane's impact is more than 25 times greater than that of carbon dioxide over a 100-year period, according to the U.S. Environmental Protection Agency.

Experts are increasingly concerned about the consequences of thawing permafrost that is located both beneath land and water in the planet's coldest regions. Last week, the Washington Post reported on "stunning and dramatic" scenes from a region of Eastern Siberia where "sections of many older, wooden buildings already sag toward the ground—rendered uninhabitable by the unevenly thawing earth," and "rivers are rising and running faster," sweeping away entire neighborhoods.

The Academic Mstislav Keldysh expedition's research team, led by Semiletov, traveled to an area of the Arctic Ocean known for methane "fountains" to study the effects of permafrost thawing. Around the "powerful" fountain they found east of Bennett Island, the concentration of methane in the atmosphere was more than nine times higher than the global average.

Describing the researchers' discovery of the fountain based on the univeristy's statement, The Telegraph reported:

When researchers drew near to the "emerald-colored" water of the methane fountain, they "could see how gas was rising to the surface from the black depths of the sea in thousands of bubbly strands," according to expedition member Sergei Nikiforov.

They took samples of bottom sediments, water, and gas, scooping up the extraordinarily large methane bubbles in buckets rather than small plastic capsules and filling several pressurized canisters.

The next day, the expedition stumbled upon another giant seep of roughly the same size, even though discovering seeps among rough ocean waves is usually "harder than finding a needle in a haystack," Mr. Nikiforov said.

The expedition's findings, also reported on Tuesday by Newsweek, elicited alarmed reactions from readers and climate activists the world over:

A New Zealand chapter of the Extinction Rebellion movement—which launched a fresh wave of peaceful acts of civil disobedience around the world on Monday to demand bolder climate policies—tweeted in response to the expedition's discovery, "This is why the disruption we caused is very minor in comparison to what's coming."

This is why the disruption we caused is very minor in comparison to what’s coming Sea "boiling" with methane disco… https://t.co/sexUKUyBDx
— XR Aotearoa NZ🦑⧖🥝 (@XR Aotearoa NZ🦑⧖🥝) 1570572185.0

"This is truly terrifying," tweeted Jim Walsh, an energy policy analyst at the U.S.-based group Food & Water Watch, linking to Newsweek's report. Noting scientists' concerns about permafrost thaw reaching a tipping point, he added that "we can't get off fossil fuels fast enough."