After three years of economic mismanagement a Trump Recession is imminent 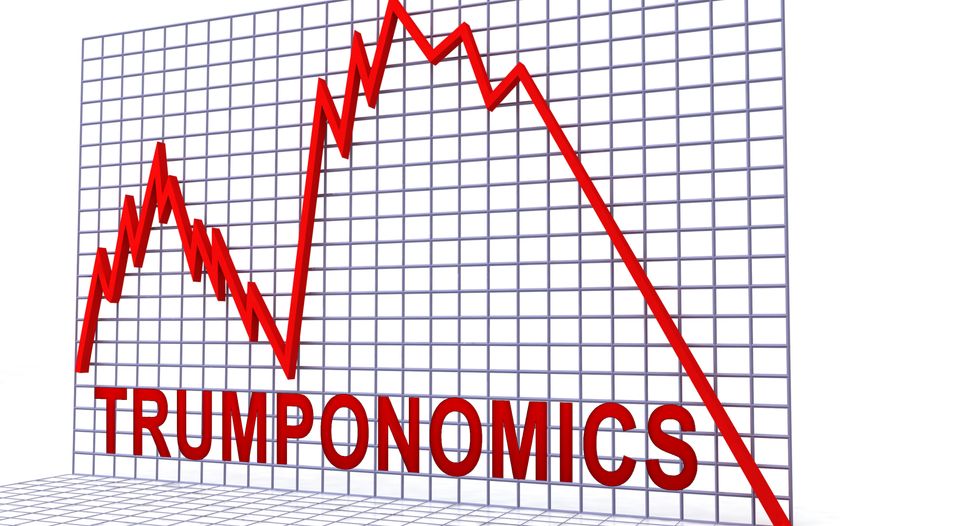 It took three years, but Donald Trump is finally on the verge of killing President Obama’s record-setting economic recovery.

A new quarterly survey from the respected National Association for Business Economics shows the American economy slowing after an unprecedented 123 months of expansion following The Great Recession. That means that we’re beginning to see less hiring in the private sector and disappointing wages for new employees among middle-class suburbanites, a long-time Republican constituency now deserting the party in droves.

The signs have been there for months: America’s manufacturing sector slid into recession in July, an early victim of Trump’s prolonged Chinese trade war. Non-farm wage growth has been stagnant since January. But this week’s NABE report marks the first time corporate sales, new hiring and new hire wages have slid together – a warning that Trump’s economic games are finally biting regular Americans.

Only 1-in-5 businesses hired additional workers this quarter, down from over 33 percent in July. That puts new hiring at its lowest level since October 2012. Trump apologists argue that anemic hiring is expected while America sits at record unemployment rates – but hiring gains aren’t evenly distributed. A recent Brookings Institution study revealed that many African American communities still face recession-level unemployment, and wages are barely outperforming inflation - even among white communities.

That is changing. And it spells trouble for Trump.

Companies facing economic turmoil are less likely to give employees bonuses and raises. NABE’s Net Rising Index of wages – an indicator of the relative growth or decline in payrolls for major companies – fell to 30 in October, down from 44 in July. This backs up federal economic data showing new-employee wages are actually declining when inflation is included in the calculation. While wages stagnate, the cost of household goods rose over 5 percent in the third quarter.

Combining flat or declining wages with reduced hiring and rising prices creates a recipe for political disaster. Nowhere is that clearer than in the suburbs that provided Trump with much of his razor-thin 2016 victory margin in states like Pennsylvania and Michigan.

Those suburbs were already turning on Republicans as early as the 2018 Midterm elections – but the reasons then were largely confined to district-level concerns. A sweeping reduction in hiring and wage growth could nationalize Trump’s economic woes in 2020, driving out even more Republican legislators and jeopardizing Trump’s margins.

Conservative suburbs can cause heartburn for Trump even if they don’t flip from red to blue in 2020. As Jonathan Rodden notes in his data-driven new book Why Cities Lose, Republican margins in suburbs don’t approach the level of concentration enjoyed by urban Democratic districts: most Republican suburbs went to Trump by single-digits. That gives Trump no margin for error in keeping these key voters happy.

A majority of economists now predict the American economy will decline into recession by the time suburban voters head to the polls in 2020. The Federal Reserve’s likely upcoming rate cuts indicate they’re concerned about a slowdown, too.

A recession would pose a major political challenge for Trump, who has struggled with negative polling despite inheriting a generally strong economy that would guarantee re-election for most presidents. Republicans are already fretting that Trump’s relatively high polling on economic issues could collapse if the country enters an employment and manufacturing slowdown.

After coasting for three years on the residual steam of President Obama’s economic policies, Trump appears to have no plan to soften the slowdown for his most valuable voters. Without some kind of action, suburban Republicans will spend the next year wondering where all their Obama-era prosperity went.

Democratic presidential contenders are capitalizing on Trump’s historic suburban weakness with a variety of tax cuts and economic plans targeting middle-class voters. The bold Medicare for All plan championed by Bernie Sanders and supported by Elizabeth Warren, Julian Castro and others would present middle-class workers with the largest take-home pay raise in American history, according to economists Emmanuel Saez and Gabriel Zucman.

Meanwhile, Trump has countered Democratic proposals with – nothing.

Trump’s mismanagement of the American economy may go down in history as one of the biggest self-defeating plays of all time. For middle-class workers, it will be just one more example of a Republican Party that has abandoned its base to cater to the interests of the ultra-wealthy.