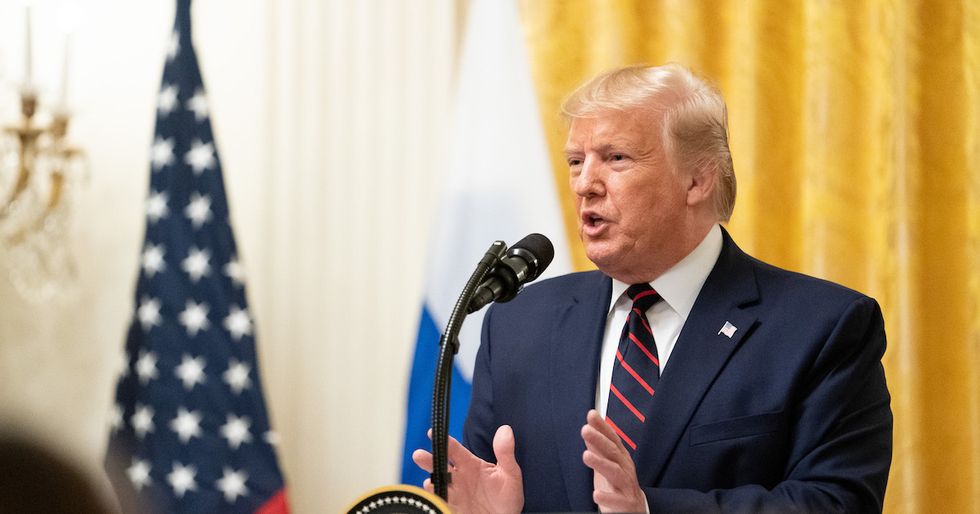 President Donald Trump and his administration will not participate in the Congressional impeachment inquiry, the White House announced Tuesday, setting up a constitutional crisis in the conflict between two ostensibly co-equal branches of government.

"It's absolutely outrageous that Donald Trump sent a letter to Congress informing them that he is above the Constitution and every law in America," said Hess. "House Democrats need to move immediately and use all the power at their disposal to compel testimony and delivery of documents, hold administration officials accountable for their contempt of Congress, and draft articles of impeachment that span all of Trump's crimes."

"If Speaker Pelosi and leadership continue to drag their feet, they are giving tacit approval of the ridiculous arguments laid out in the White House counsel's letter," Hess added. "We can't wait any longer."

White House Press Secretary Stephanie Grisham said in a statement that the administration would not cooperate with the inquiry and seemingly closed the door on any negotiations.

"The Executive Branch cannot be expected to, and will not participate in, this exercise of partisan political theater," said Grisham.

As NBC reported Tuesday, the inquiry is not baseless:

House Democrats launched the impeachment inquiry last month amid reports of Trump's July phone conversation with Ukrainian President Volodymyr Zelenskiy, during which he asked Zelenskiy to "look into" former Vice President Joe Biden and his son Hunter. Trump's decision to unexpectedly freeze nearly $400 million in military aid to the Ukraine days before the call has led to allegations that he was attempting a quid pro quo arrangement.

The letter announcing the administration's refusal to cooperate was written by the president's White House counsel Pat Cipollone. Cipollone argued that the impeachment inquiry is a "highly partisan and unconstitutional effort threatens grave and lasting damage to our democratic institutions, to our system of free elections, and to the American people."

Furthermore, Cipollone writes, the inquiry is "constitutionally invalid and a violation of due process."

"The President cannot allow your constitutionally illegitimate proceedings to distract him and those in the Executive Branch from their work on behalf of the American people," the nine-page letter concludes. "The President has a country to lead."

Those claims by the White House, however, met with immediate pushback, with Politico journalist Andrew Desiderio pointing out that Cipollone's letter read "more like a political document than a legal document."

"This would be funny if it weren't so delusional," tweeted progressive group MoveOn in response to the announcement. "The House is completely within its rights to hold impeachment hearings."

Earlier Tuesday, as Common Dreams reported, the president's lawyers said that the Watergate case against then-President Richard Nixon was improperly decided and that if the case came before the court today, there would be a "different result."

"But seriously folks this is actually a constitutional crisis," said Greenberg.