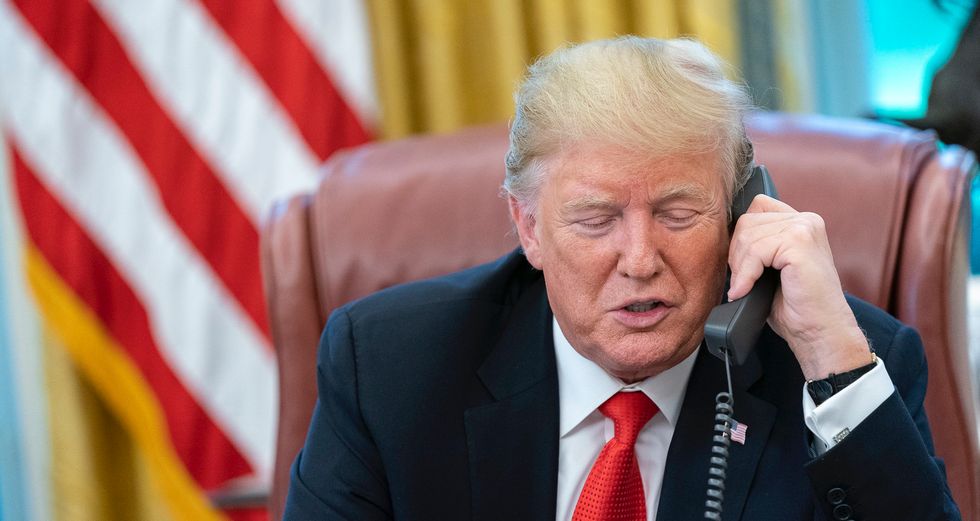 There's been a simmering debate this week about how expansive Democrats' impeachment inquiry into Donald Trump's lawlessness should be. According to multiple accounts, House leaders appear to be coalescing around the idea of conducting a fast inquiry narrowly focused on Trump's efforts to coerce the Ukrainian government to probe various conspiracy theories about Joe Biden and his son Hunter.

But that may not be possible.

What began as a scandal related to a call with the president of Ukraine has, in the course of one short week (albeit one that felt like several years), already expanded well beyond that one incident. We've learned that there were conversations with other heads of state that freaked out White House staffers, and that records of those talks, like the one with Ukraine's Volodymyr Zelensky, were buried on a top-secret White House server.

Democrats will obviously pursue this line of inquiry, and others that arise from the investigation. And it's quite possible, if not likely, that doing so will reveal other scandals of similar gravity. After all, White House lawyers also reportedly concealed records of calls with Vladimir Putin and Saudi Crown Prince MBS--shortly after he allegedly ordered the killing of WaPo contributor Jamal Khashoggi.

Consider some of the issues that House Democrats are likely to pursue.

Presidential candidate Joaquin Castro is calling for an "investigation into whether Jared Kushner shared intelligence that led to [the] Khashoggi killing." [Newsweek]

"Trump told Russian officials in an Oval Office meeting that he was unconcerned about Moscow’s interference in the election because the US did the same in other countries, an assertion that prompted alarmed officials to limit access to the remarks." [WaPo]

Then there's William Barr's apparent role in UkraineGate. And Rudy Giuliani's. And others...

All of that, and more, has emerged in the first week of this shitshow. There's also a second whistleblower report lurking in the wings, according to The Huffington Post, which may contain "evidence that Trump tried to corrupt an Internal Revenue Service audit of his personal tax returns."

Recall that Ken Starr began investigating a land deal in which the Clintons lost money and ultimately ended up charging Bill for lying about sex.

One other thing to keep in mind: The Dems can focus their investigation on these issues and still write articles of impeachment broadly enough to include Trump's relentless attempts to obstruct the Kremlingate probe, violations of the Emoluments Clause and other matters. We'll have to see how it shakes out.

In the meantime, the regime's usual mix of venality, cruelty and incompetence continued as usual this week, so let's look at what other Fresh Hell got lost in this week's cascade of big breaking news stories.

Steven Menashi, a young wingnut Trump has picked for a lifetime gig on the federal bench, may be caught up in Stupid Watergate, according to The Huffington Post. As a member of the White House legal team, Menashi is coming under fresh scrutiny for any role he may have played in covering up Trump's abuses of power.

The White House is trying to manage an impeachment with a team of neophytes and Trump lackeys, according to a new study by The Brookings Institution.

"The top echelon of the Trump administration has become a high-speed revolving door — with turnover in 78 percent of the positions," NBC reports. "And 31 percent of those White House 'A-Team" jobs have turned over more than once...

"'It's historic, it's unprecedented, it's off the charts,' the study's author, Kathryn Dunn Tenpas, told NBC News. 'I've never seen this kind of turnover before.'"

A tale of swamp-draining from Coral Davenport at The NYT...

For years, the Interior Department resisted proposals to raise the height of its towering Shasta Dam in Northern California. The department’s own scientists and researchers concluded that doing so would endanger rare plants and animals in the area, as well as the bald eagle, and devastate the West Coast’s salmon industry downstream.

But the project is going forward now, in a big win for a powerful consortium of California farmers that stands to profit substantially by gaining access to more irrigation water from a higher dam and has been trying to get the project approved for more than a decade.

For much of the past decade, the chief lobbyist for the group was David Bernhardt. Today, Mr. Bernhardt is the Interior Secretary.

“It is unequivocally clear to us,” the firm warns, “that the Russians invested a significant amount of money and effort in the first half of this year to build large-scale espionage capabilities. Given the timing, the unique operational security design, and sheer volume of resource investment seen, Check Point believes we may see such an attack carried out near the 2020 U.S. Elections.”

In related news, "the chair of the Federal Election Commission decided to tweet the entire weekly agency digest — after it was blocked by a GOP commissioner because it addressed illegal foreign election activities," according to HuffPo, which adds: "That’s a topic Republicans are particularly sensitive about just now."

The regime finalized its new overtime rule this week. "The rule leaves behind millions of workers who would have received overtime protections under the much stronger rule, published in 2016, that Trump administration abandoned," writes economist Heidi Shierholz at EPI. The new rule lowers the income threshold to be eligible for mandatory overtime pay from around $48,000 per year to just under $36,000.

In fairness, he did promise to run the country like his business.

This week, the regime moved to lower the cap on refugees admitted to the US to just 18,000, the lowest number since the current program began some 40 years ago. Newsweek reports that "experts are sounding the alarm that the Trump administration's decision could see local economies, as well as the national one, take a hit."

A story that should have competed with Trump for this week's headlines: "Climate Risk in the Housing Market Has Echoes of Subprime Crisis, Study Finds."

And we'll leave you with a bit of good news from the courts...