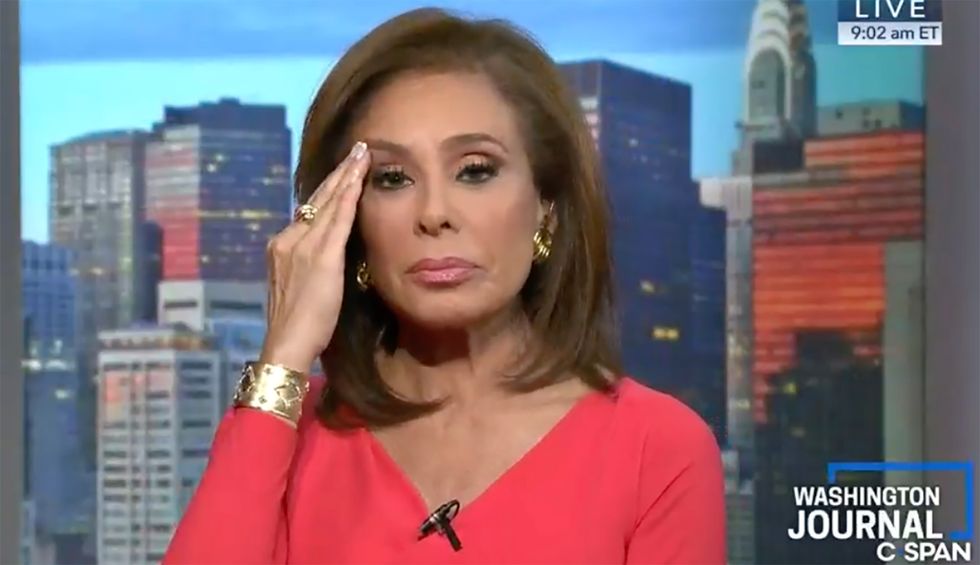 Jeanine Pirro, host of Fox News’ “Justice with Judge Jeanine,” faced suspension from the right-wing cable news outlet earlier this year after attacking Rep. Ilhan Omar for wearing a hijab on the job. The 68-year-old Pirro has never shied away from controversy, and she was as inflammatory as usual this week during an hour-long appearance on C-SPAN’s “Washington Journal” (hosted by Steve Scully).

After a friendly female caller from Tennessee brought up gun control and insisted that “Democrats are only attacking white people’s guns,” the 68-year-old Shapiro went into a tirade about “black-on-black crime.”

“One of the biggest criminal justice issues in this country — and I’ve talked about it as a DA and as a judge — is black-on-black crime, which unfortunately, doesn’t get the attention it should,” Pirro told Scully.

Pirro went on to discuss violence in Chicago — a city Republicans love to attack — and declared, “The problem with Chicago: guns are illegal in Chicago. So, everybody thinks if you make guns illegal in the United States, it’ll be nirvana — there won’t be any crime. Hogwash! The perfect example is Chicago.”

Pirro added, “Now, the reason Chicago has so much gun crime is, number 1, the people who have the guns are all criminals — it’s all illegal weapons. The only way to resolve that is to prosecute gun crimes. And the last time I checked, in Chicago, their prosecution of gun crimes is extremely low. You’ve got gangbangers, and you’ve got all kinds of criminal elements with drugs who’ve got these guns…. Why is gun prosecution so low in that city?”

During the interview, Scully asked Pirro about President Donald Trump’s recent criticisms of Fox News — which he complained is “not working for us anymore.” And Pirro replied, “You would have to ask him. I am not quite sure what that was about.”

Not all of the callers were supportive. A caller from Colorado “congratulated” Pirro on her suspension from Fox News and asserted that Trump receives negative media covers because he “lies every single day.” The caller also accused Pirro of promoting the racist Replacement Theory for Fox News “predominantly white older audience.”

Pirro responded with a lengthy rant, attacking “the venom that’s coming from the left…. When the left gets to the point where they want to shut down free speech, they don’t want us to speak at universities…. You’ve gotta ask yourself, ‘Where is the venom coming from here?’”

Pirro went on to say, “And then, Antifa comes in — a bunch of bozos in ninja outfits who are cowards who cover their faces to attack people on the right. A domestic terrorist organization, and the police stand down and don’t make an arrest because they’re told by liberal mayors they cannot make arrests of people in Antifa.

The Fox News host also attacked the left for being hostile to Justice Brett Kavanaugh, who she described as “the closest thing that I’ve seen to an altar boy in an adult male in my lifetime.”