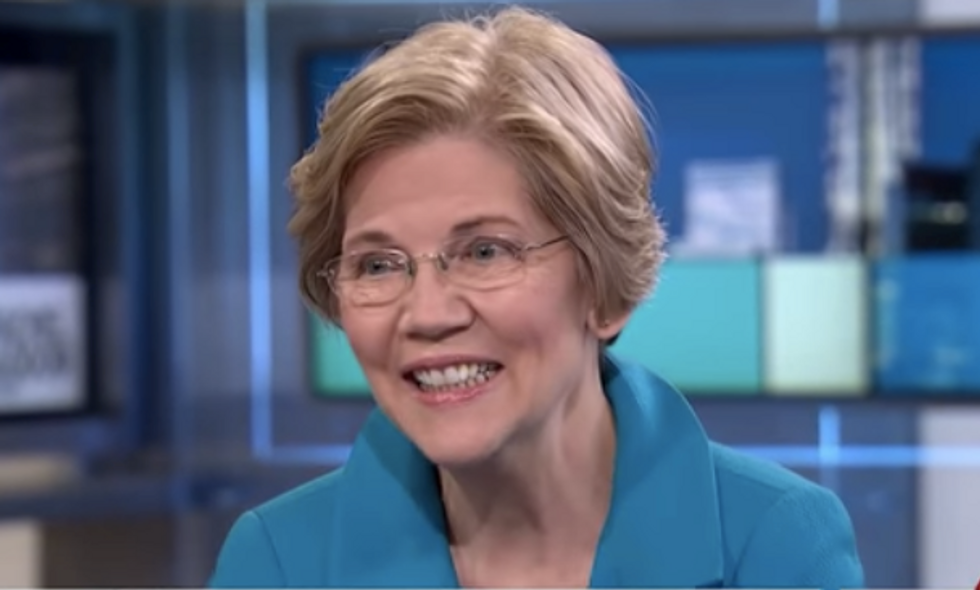 Sen. Elizabeth Warren (D-MA) is reportedly scaring Wall Street executives as she continues to rise in the race for the 2020 Democratic Party presidential nomination, and she couldn't be happier.

CNBC's Jim Cramer apparently brought a smile to her face Tuesday in a video posted on Twitter. The "Mad Money" host was discussing the fact that Wells Fargo hasn't had a permanent CEO for months with the "Squawk on the Street" team, and then he threw out an offhand comment that perhaps CEOs and potential CEOs are worried about Warren's potential presidency.

"I've got to tell you, when you get off the desk and you talk to executives, they're more fearful of her winning!" he said. "I mean I've never heard anybody say: 'Look, she's gotta be stopped! She's gotta stopped!' ... She keeps going up in the polls, she's going to win Iowa, I believe. She's a very compelling figure on the stump."

It's not clear exactly which of Warren's policy proposals terrify them most — she's got a lot of them — but one, in particular, is likely to spook CEOs: co-determination. Her plan would force corporations to allow workers to elect 40 percent of the board's membership. If workers had a say on corporate boards, a lot of CEOs might lose their jobs — or be forced to accept pro-worker policies that they find objectionable.

Warren, meanwhile, thinks reports that she has CEOs spooked are a signal that she's on the right path: