'Untouchable' Harvey Weinstein: Everyone agreeing with Dave Chappelle on #MeToo needs to watch 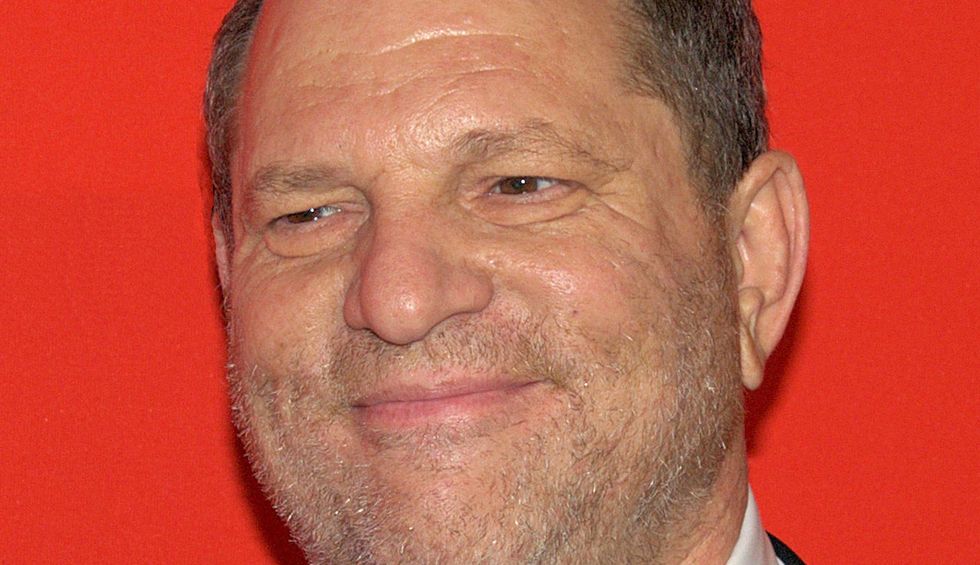 This is approximately how long Ursula MacFarlane, the director of “Untouchable,” holds a tight shot on Hope D’Amore’s face as she haltingly walks through the time she says Harvey Weinstein raped her. D'Amore says this happened long before Harvey Weinstein was a Hollywood super-producer — in the 1970s, when he was a confident concert promoter in Buffalo.

“He just pushed and pushed and … and then he just, you know, he’s huge,” D’Amore says. “I weigh about 100 pounds. Probably weighed about 110 then. I don’t know how to explain it. I just thought, if I just shut up, it’ll be over in a few minutes. I didn’t want anything from him. But I said no and I pushed him away, more than once. And then I just stopped. “

D’Amore doesn’t say much more than this, and she doesn’t have to. The excruciating impact of her accusation isn’t in what she says but long pauses between the words — when she can get them out. Most of her account plays out in an uninterrupted shot.  When D’Amore isn’t speaking — and for most of those three minutes and 40 seconds, she is silent — her body language is desolating. She turns away from the camera, casting her view upward at an unknown focal point, the way a person does when she’s trying to maintain her composure. Eventually she breaks down.

Cancel culture, #TimesUp, #MeToo, Trumpian sexism, it’s all become a flood conspiring to drown us in dissonance. This is how movements are quelled after they explode — a social quake rocks the culture, and the mainstream embraces it for a time. Then comes backlash, assertions that all this anger is overblown and everyone is overreacting, that we all need to grow a thicker skin, and how the hell are you going to survive in show business if [insert offense here] is an actual obstacle to your dreams?

That last part, by the way, indirectly paraphrases one of Dave Chappelle's 2018 Netflix specials. The one released last week is no less indicting of women who come forward with accusations of sexual misconduct and abuse involving powerful men.

“I’m sorry, ladies, I’ve just got a f-----g #MeToo headache,” he tells the audience in “Sticks & Stones.” “It’s really fucking tough to watch what’s going on.” But in Chappelle's estimation, the problem isn't with the massive power differential between alleged perpetrators and the women they target, but the irritation the women cause by going public with their stories.

He goes on to remind the audience that in his previous special, “I told you you were right, but the way you’re going about it is not going to work.” (Does he suggest workable  solutions? Why even ask that question?)

Floods don’t wash places clean. They make them filthier. That’s why a clarifying documentary like “Untouchable” is in order, because the cascade of allegations and headlines that have spilled forth since late 2017 has resulted in a mass forgetting of how this all started — why so many survivors of sexual abuse, harassment and discrimination are coming forward now after staying silent for years on end.

Everything comes back to the actions of a powerful man, and the ways in which he’s representative of many, many other powerful people who are invested in keeping such crimes silent.

Monday’s debut of “Untouchable” on Hulu has nothing to do with the surge of groaning over #MeToo, and honestly, people like Chappelle are never going to do an about-face on punching down at the vulnerable.

The release of “Untouchable” would have coincided with the commencement of Weinstein’s criminal trial, which was originally scheduled to commence in September and was predicated on five felony charges stemming from sexual assault allegations in 2006 and a 2013 rape accusation.

But on August 26 Weinstein pleaded not guilty to a fresh indictment on two counts of predatory sexual assault, delaying his trial to January 2020. Weinstein continues to deny all accusations against him and is currently free on $1 million bail.

MacFarlane’s film is neither alone nor first in taking on the disgraced mogul. “Frontline” aired “Weinstein” last spring, which includes numerous interviews with prominent accusers in addition to speaking with a woman who worked on Weinstein’s first movie and had not yet gone public.

On Friday, filmmaker Kitty Green debuted “The Assistant” at the Telluride Film Festival, which she say is inspired by Weinstein’s sexually predatory behavior. Green’s is one of several fictionalized movies in the works; another is in development by Brad Pitt’s production company Plan B and Annapurna.

MacFarlane constructs “Untouchable” as a many-chaptered crime story that also functions as a career biography. Rewinding to Weinstein’s early days as a promoter, she carefully constructs a profile of a man desperate for respect and worship, the persona of never take no for an answer, as an early assistant recalls.

It’s when “Untouchable” journeys into the terrain of the earliest Miramax days, when he teams up with his brother Bob, that Weinstein’s influence and reach becomes palpable, especial to film fanatics who came of age in the 1990s when the production company was at its zenith. “Sex Lies and Videotape,” “My Left Foot,” “Cinema Paradiso,” these are generation-defining movies to certain cinephiles, perhaps equal in influence to “Pulp Fiction.”

This is where MacFarlane’s early insistence in placing the view inside D’Amore’s agonizing silence makes “Untouchable” the most personal long-form documentary on the producer yet. Using this technique hooks into the deep level of emotional betrayal of Weinstein’s corruption.

It’s downright unnerving to see former assistants such as Zelda Perkins smile, even now, as she explains in one moment how joining Weinstein on dinners with A-list actors and flying around in private jets made her feel like the center of the universe, and in the next explaining that constantly rebuffing his advances exhausted her.

“You are always slightly fighting, you are always feeling like you’re just keeping your head above water,” she says.

But there's also the subtle anger at knowing Weinstein made an entire culture unwittingly complicit in his actions. Intentionally he made the entertainment industry an accessory, as fellow actors, directors, producers kept silent about his abuses, and media outlets suppressed negative coverage.

Rosanna Arquette is the most famous of survivors and accusers featured in “Untouchable,” but MacFarlane’s focus on subjects who aren’t well known, such as Louise Godbold, Caitlin Dulany and  Nannette Klatt, makes the piece more powerful. And Paz de la Huerta, who recently expanded her civil suit against Weinstein to include Disney executives, radiates damage and recovery as she sits for her interview: “I was intimidated by him and his power. I mean, he’s a repulsive man, physically,” she says, making the subsequent description of her alleged assault all the more horrifying.

The debut of “Untouchable” comes just ahead of the two-year anniversary of New York Times reporters Megan Twohey and Jodi Kantor’s damning exposé, published in October 2017, closely followed by Ronan Farrow’s story in the New Yorker.

All of these journalists appear near the end of “Untouchable,” but it’s Rebecca Traister’s and Andrew Goldman’s telling of their shared encounter at a party in New York City circa 2000 that explains why the publication of those 2017 stories was so significant.

The pair were dating at the time, and they were attending the event to get quotes for separate stories. But along the way Weinstein became incensed and attempted to take their recording devices — particularly after Goldman got him on tape declaring, “I’m glad I’m the f**king sheriff of the sh*t-ass f**king town.”

The assault that followed, as described by Traister and Goldman, involved Weinstein dragging Goldman onto the sidewalk outside the event and punching him in the head while he held the reporter in a headlock. Traister recalls watching and hearing the clicking of countless cameras capturing the entire event on film. And not one photo was published afterward. Or, by Traister’s reckoning, since.

“The lesson I learned was, as great of a line as ‘I’m glad I’m the f**king sheriff of the sh*t-ass f**king town’ is, it doesn’t work unless you really are the sheriff,” Goldman says. “And he was, at that point. He could do anything.”

Since Weinstein’s toppling, accusations of sexual misconduct have effectively — thus far — ended the careers of Charlie Rose, Matt Lauer, Kevin Spacey and another whale, former CBS chairman Les Moonves. Other entertainment moguls including Russell Simmons and Brett Ratner also have allegations against them for which they have not answered, in any fundamentally life-altering fashion.

On the other hand, #MeToo also has resulted in criminal action finally being taken against R. Kelly decades after being placed on trial for child pornography charges, among other allegations. And, of course, there are the accusations that forced Chappelle’s good friend into a career retreat followed by those against Michael Jackson.

Chappelle will never apologize for making a seven-course comedy meal over what he embraces as “victim blaming,” or for speaking against a movement he sees as out of control, because that’s a contrarian stance, and comics are supposed to be contrarian. Besides, who will stand up for millionaires if not for their fellow millionaires?

“We all make mistakes — second chance, I hope,” Weinstein says in a piece of archive footage, recorded by seemingly sympathetic paparazzi as he’s getting into an SUV.

MacFarlane answers this moments later with a defiantly astringent quote from Arquette near the end of “Untouchable”: “This is a revolution. So go f**k yourselves. How dare you. And we are not going to be silenced. We will not be silenced.” It’s a sharp bookend to those three minutes and 40 seconds of D’Amore’s shouting soundlessness in the beginning of the documentary.

Together, these voices allow “Untouchable” cut through the clutter of irate dismissal. Let’s see how many people are willing to avail themselves of a clearcut view to where this path began.