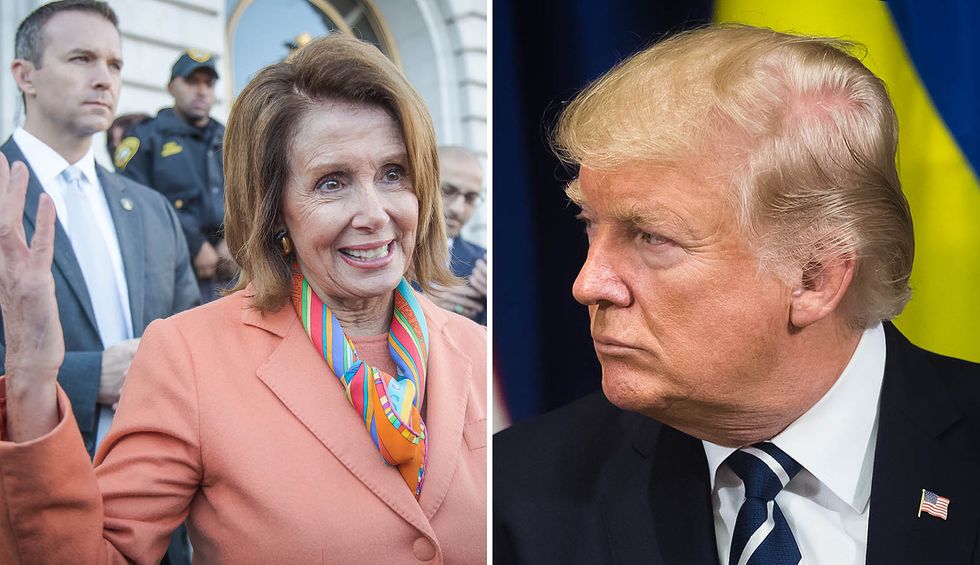 President Donald Trump is experiencing a backlash in response to repeating a far-right evangelical pastor’s threat that impeachment could lead to civil war in the United States. And a Harvard Law School professor is asserting that repeating the pastor’s comment is, in itself, a “basis for impeachment.”

Over the weekend, Trump supporter Robert Jeffress — far-right pastor of the First Baptist Church in Dallas and a prominent figure on the Christian Right — appeared on “Fox and Friends” and railed against House Speaker Nancy Pelosi for coming out in favor of an impeachment inquiry. Jeffress, during a Sunday appearance on Fox News’ “Fox and Friends,” angrily defended Trump and told co-hosts Pete Hegseth and Jedediah Bila, “I do want to make this prediction this morning: if the Democrats are successful in removing the president from office, I’m afraid it will cause a Civil War-like fracture in this nation from which this country will never heal.”

Trump took to Twitter and repeated Jeffress’ “civil war” threat, and John Coates — a law professor at Harvard University — saw Trump’s tweet and responded, “This tweet is itself an independent basis for impeachment: a sitting president threatening civil war if Congress exercises its constitutionally authorized power.”

Trump’s tweet has also been condemned by Republican Rep. Adam Kinzinger, a military veteran who tweeted that having “visited nations ravaged by civil war,” he found the tweet “beyond repugnant.” Kinzginer served in the U.S. Air Force during the Iraq War.

I have visited nations ravaged by civil war. @realDonaldTrump I have never imagined such a quote to be repeated by… https://t.co/OdQseHJDVA
— Adam Kinzinger (@Adam Kinzinger)1569808758.0

Democratic activist Mieke Eoyang (vice president of the centrist Third Way think tank) was critical of Trump’s “civil war” comment as well, tweeting, “The last time the nation was torn apart by civil war, it was to ensure the freedom of an entire race of people. Over 600,000 people died. The president would tear the nation apart to prevent the accountability for one man.”

The last time the nation was torn apart by civil war, it was to ensure the freedom of an entire race of people. Ove… https://t.co/VVKGvuHPIo
— Mieke Eoyang (@Mieke Eoyang)1569811698.0

Pelosi’s call for an impeachment inquiry is a major shift from her previous position.

Before last week, Pelosi was the most prominent anti-impeachment voice in the Democratic Party; she resisted impeachment during former Special Counsel Robert Mueller’s Russia investigation and continued to do so after the Mueller Report was publicly released in redacted form. But on September 24, Pelosi changed her mind in response to the Ukraine scandal and Trump trying to pressure Ukrainian President Volodymyr Zelensky, during a July 25 phone conversation, into investigating former Vice President Joe Biden and his son, Hunter Biden.