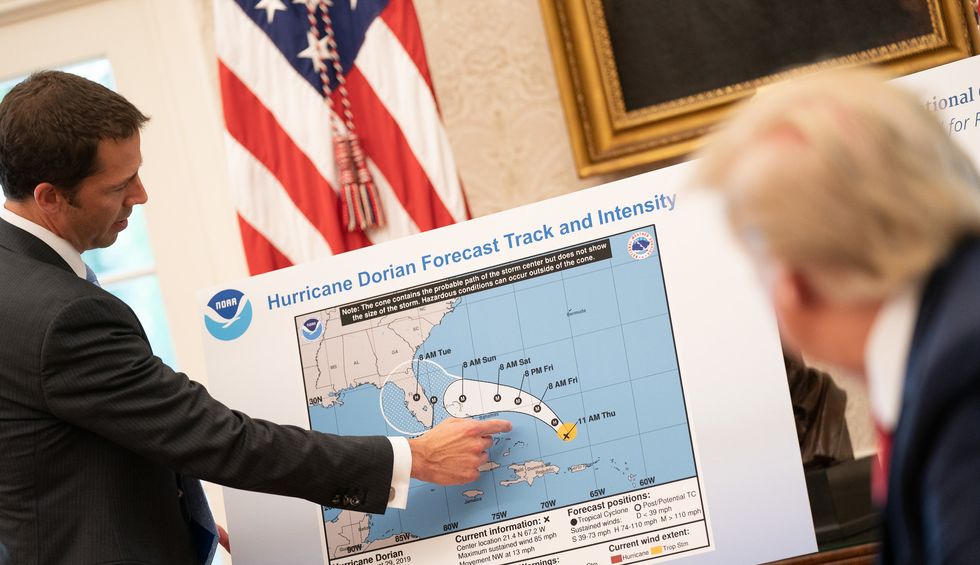 On Sunday, President Donald Trump tweeted that Alabama was in the path of Hurricane Dorian — which had been battering the Caribbean — along with Florida, Georgia and the Carolinas. But the National Weather Service corrected Trump, stressing that Alabama was not in danger — and that Dorian wouldn’t be going that far to the west. Regardless, Trump bafflingly doubled down on his false claim this week by apparently circling, with a sharpie, part of southeastern Alabama in a National Hurricane Center map.

On Monday, Trump had refused to be corrected and insisted, on Twitter, that “under certain original scenarios, it was, in fact, correct that Alabama could have received some ‘hurt.’"

And then in a White House update on Wednesday, Trump held up that map and discussed the hurricane’s trajectory. On the map, one can see where someone circled part of Alabama along with Florida. But the area that Trump had circled was further to the west than what had been forecast, falsely suggesting that his botched claim over the weekend had been accurate.

The President of the United States altered a National Hurricane Center map with a sharpie to falsely extend the off… https://t.co/Hhb3fuc4Uq
— Dennis Mersereau (@Dennis Mersereau) 1567619744.0

The President held up a fake and doctored hurricane forecast map from the National Hurricane Center today to try an… https://t.co/QEeCCEjChQ
— Tom Winter (@Tom Winter) 1567625015.0

Zeke Miller, White House reporter for the Associated Press, demonstrated in a tweet on Wednesday how inaccurate Trump was. Miller noted that on Friday night, the forecast for Dorian showed that “the tiniest slice of Alabama was on the edge of the 5-day cone of uncertainty for the center of the storm.” By the time Trump mentioned Alabama in a tweet on Sunday, Miller explains, “the storm forecast had shifted well to the east.”

Another AP reporter, Jonathan Lemire, has also corrected Trump on the path of Hurricane Dorian. Appearing on MSNBC’s “Morning Joe” on Tuesday, Lemire asserted, “His words do matter. He is the president of the United States. Anything he says or tweets can move markets…. And in this case, even after being told he was incorrect, he wouldn’t back down from it.”

It is a violation of federal law to falsify a National Weather Service forecast and pass it off as official, as Pre… https://t.co/8TOZWeEZm4
— Dennis Mersereau (@Dennis Mersereau) 1567620087.0