Trump has been extorting U.S. ally Ukraine—and we've known it for months 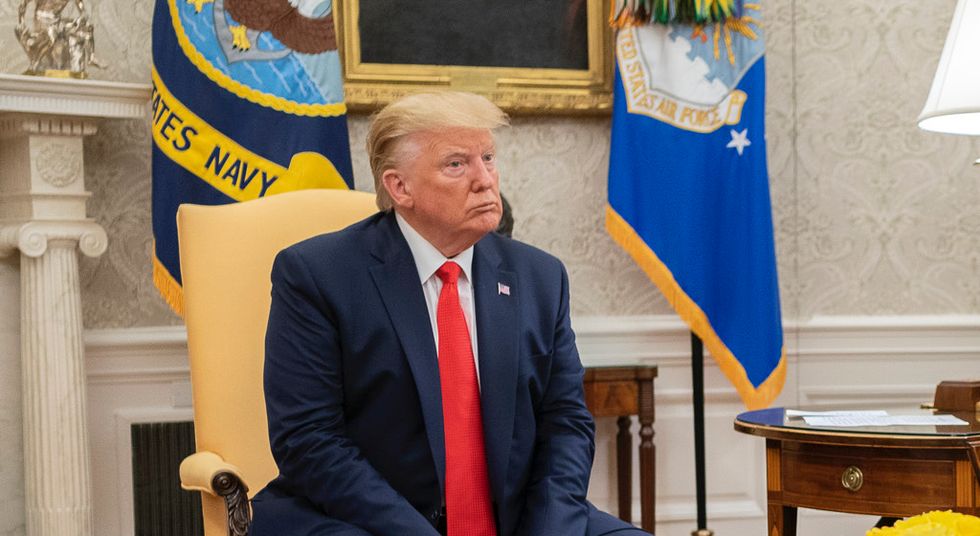 Volodymyr Zelensky ran for president of Ukraine on a platform of cleaning up corruption and turning the nation toward the west. Then the first thing his biggest western ally did … was call him up and demand that he fabricate evidence against a political opponent. And Donald Trump made it very clear that, unless Zelensky found someone to spoon the make-believe dirt about Joe Biden, he would leave the nation hanging, lacking in everything it needed to defend itself against an ongoing Russian invasion.

Horrible as the truth about the whistleblower report may seem, there’s something even more horrible—we already knew this. It’s not as if Trump and bagman Rudy Giuliani have been subtle. Giuiliani went right on the front page of The New York Times, which was happy to give him the space, to explain how he and Trump had leaned on a former prosecutor to concoct a story Giuliani knew to be untrue. And how did Giuliani describe what he was doing?

Giuliani: We’re not meddling in an election, we’re meddling in an investigation, which we have a right to do. … There’s nothing illegal about it. Somebody could say it’s improper. And this isn’t foreign policy—I’m asking them to do an investigation that they’re doing already and that other people are telling them to stop. And I’m going to give them reasons why they shouldn’t stop it because that information will be very, very helpful to my client, and may turn out to be helpful to my government.

Giuliani’s first attempt to create a scandal by “meddling in an investigation” to help Trump fell apart when the prosecutor who first agreed to read Rudy’s pre-written script got cold feet and admitted the whole thing was a lie. That didn’t stop Giuliani, or Trump. Giuliani went back to Ukraine, but was disappointed to find that people in the new government didn’t want to talk to him. Didn’t want to talk to him so much, that he was forced to go to Madrid to threaten a Ukrainian official there.

From the moment it started, it was clear that the scandal in this story wasn’t Biden’s. It all belonged to Trump and Giuliani. And it’s been clear for some time that Trump was determined to have Ukraine’s help in the 2020 election … even if it took using the power of the White House to show Ukraine what corruption really looks like.

Trump’s connection to Ukraine has been turning up again and again since well before he was elected. Not only was the importance of protecting Ukraine downgraded in the Republican Party platform at the request of Trump’s campaign, it was in Ukraine that Trump’s campaign chair Paul Manafort did his best work—where best means selling out an American ally to, and helping to install a pro-Russian government, while walking away with millions under the table.

But since this spring, the idea of convincing Ukraine to give Trump something he could use to smear Biden has become an obsession. And while Giuliani has been the public face of that effort, he’s never hidden the fact that Trump was working directly with him to convince Ukrainian officials to play ball.

Some coverage over the last year …

May 2, 2019 — Trump and Giuliani are pushing a scandal in Ukraine

May 7, 2019 — The “scandal” Trump was counting on to bring down Biden is falling apart

May 11, 2019 — Trump recalls ambassador to Ukraine to help Giuliani

May 17, 2019 — Everything Giuliani has been selling about Biden in Ukraine is a lie

And today we don’t just have word that the actions regarding Ukraine are at the center of the still unreleased whistleblower report — we have this unmatched performance from Rudy Giuliani to put a cherry on the scandal cake.