Trump flails when a reporter presses him on the bogus weather map he shared: 'I don't know, I don't know' 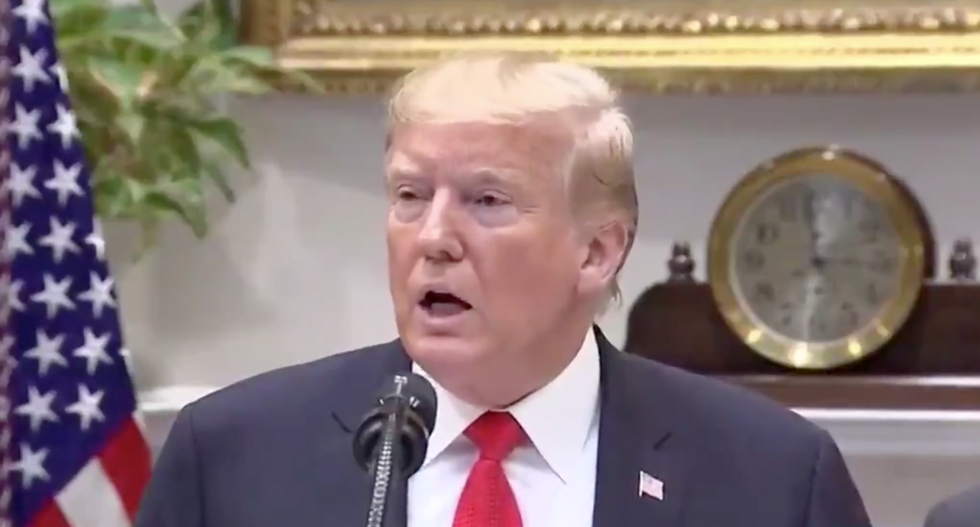 As with many stories about President Donald Trump, this one may toss you into a familiar cycle: first you laugh, then you cry, and then you fantasize about November 2020.

The president's latest round of nonsense began on Sunday when he announced on Twitter that, among other southern states, Alabama "will most likely be hit (much) harder than anticipated" by Hurrican Dorian, which was making its way toward the East Coast.

Just shortly after that tweet, the National Weather Service branch in Birmingham, Alabama, refuted the president:

When Trump was speaking with reporters Sunday after the tweet, he reiterated that Alabama was in the storm's path, even though, as CNN reported, a spokesperson for the National Oceanic and Atmospheric Administration confirmed this was false.

But Trump doubled down, again and again, saying that Alabama was likely to get hit and lashing out at the media for reporting on his discrepancies. Then on Wednesday, the White House posted a video on Twitter showing the president referring to an outdated weather forecast, which, nevertheless didn't show Dorian hitting Alabama. But there appeared to be an additional line, possibly drawn in sharpie, that falsely extended the projection of the storm's path into Alabama.

Later on Wednesday, when pressed about this bizarre map, Trump flailed in response. He said he didn't know where the falsified map came from.

"Actually, we have a better map than that which is going to be presented, where we had many lines going directly — many models, each line being a model — and they were going directly through, in all cases, Alabama was hit," he said.

CNN Weather meteorologists say one forecast on Friday afternoon showed one-tenth of one county in extreme southwest Alabama was included in one model. But that map bears little resemblance to the one Trump showed on Wednesday. And the official track from the National Hurricane Center never showed Dorian's track entering the Gulf of Mexico, as Trump also claimed.

One available map, shared on Monday by the National Hurricane Center, showed a projection of Dorian's path that did somewhat overlap with the state of Alabama. But the section covering the state only represented a 5 percent chance of receiving 39 mph winds in a narrow region; it did not suggest at all that Alabama would likely be "hit (much) harder than anticipated."

If Trump wants to defend his false claims, he would have been wiser to use this map, rather than one with a clumsily drawn line.

But he shouldn't just be worried about defending himself. He should be worried about trying to get things right, because his decisions and credibility actually matter. But as always, Trump finds it impossible to admit he was ever wrong.