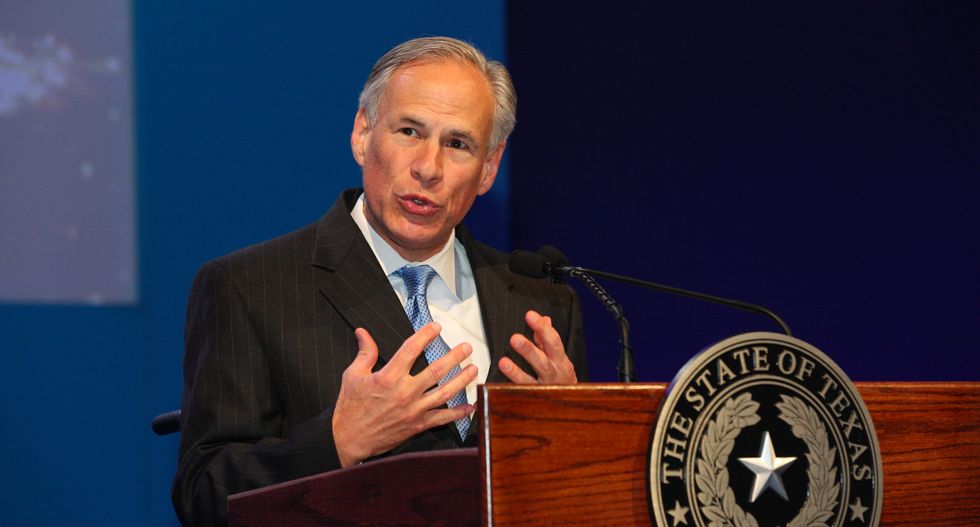 In the space of 25 months, there have been at least six major mass shootings in Texas. Eighty-one people have died in these incidents. Nearly 100 people were injured, some in ways that are debilitating. I don't live in Texas any longer, but these attacks feel personal all the same: The El Paso shooting happened in the neighborhood where I grew up, and my mother's family lives in the area where the latest West Texas shooting took place. People are understandably terrified by these random crimes that end the lives of people who were simply out shopping or in church or out for the day with their families, but unfortunately, Texas Gov. Greg Abbott, a Republican, has nothing but empty words to offer to the public.

After so many mass shootings during his tenure, Abbott clearly feels he needs to be seen appearing to take action. But make no mistake: These words are empty noise. Abbott and the Texas Republican Party, which has a death-grip on power in the state, have no intention of taking any meaningful action to stop mass shootings — or any kind of shootings — in their state. On the contrary, while the cities of Midland and Odessa were still reeling from the effects of a man driving around shooting strangers on the streets, a new slate of laws loosening restrictions on guns were going into effect.

It's still unclear how Seth Ator, the man who killed seven people on Saturday before he was killed by police, obtained his weapons. Ator had a minor criminal record and, according to Abbott, had failed a background check when trying to purchase a weapon legally.

Ator himself seems to have been a mass of waving red flags that, in a saner system, should have been cause to remove any guns he owned a long time ago. Ator's neighbor said she and her husband called Ator "El Loco" because he was always shooting animals from his house. Once he came to her house, she said, threatening her with a gun. She claims police didn't do anything about it because he had no legal address.

On the day of the shooting, Ator had been fired from his job with a local oil company. Apparently there was enough conflict that both he and his employer had called the police, who, again, don't seem to have done much in response, even though Ator had also left what are described as "rambling" phone messages with the FBI. So when police cops pulled him over Saturday for a minor traffic violation, the officers had no idea they were dealing with someone who had a clear history of behaving erratically and dangerously.

Some states have laws specifically designed to keep people like Ator from having guns. Twelve states have universal background-check laws to keep people who fail federal checks from simply turning around and just buying weapons from private dealers instead. A handful of other states take it a step further, requiring people to get a permit to purchase firearms. In addition, a number of states have passed "red flag" laws that give family members or law enforcement the ability to petition the government to take guns away from people who are behaving in a disturbing or frightening manner, as Ator had been doing.

But Texas laws make it pretty easy for people who should be barred from buying guns to get ahold of them anyway. Federally licensed gun dealers in the state have to run federal background checks, but there are there are no state background checks, and private sellers are entirely exempt from these rules. While Democrats in the state have pushed for red flag laws, the Republicans who control all branches of state government have stopped such bills from even being debated in the legislature.

After the high school shooting in Santa Fe, Texas, last year, Abbott publicly flirted with the idea of a red flag law, but then swiftly backed down under pressure, especially from Lt. Gov. Dan Patrick, a hard-right Republican who said, "I have never supported these policies," and insisted there was no chance of such a law passing the state legislature.

At a hearing held on the issue in 2018, opponents of gun safety laws argued against red flag laws by shamelessly invoking the specter of bitter women using the laws to take guns away from their ex-husbands. In reality, of course, such laws require due process to prevent frivolous complaints.

More to the point, women who call the police about armed ex-husbands often have real reason to be afraid. Every day in this country, an average of three women are murdered by current or former romantic partners. The mass shooting at a church in Sutherland Springs, Texas, in November of 2017 — which left 26 people dead — started off as a domestic violence situation: The shooter's ex-wife's family attended the church, and he seemed to be motivated by a desire to hurt her. Another mass shooting a couple of months before that one left eight people dead murdered after a man showed up at his ex-wife's house to kill her and all her friends, who were there for a cookout.

Desperate to look like he's actually doing something while doing nothing, Abbott tweeted on Monday that "Expedited executions for mass murderers would be a nice addition" to existing criminal laws.

This is particularly dumb, because most of these mass murderers go into the shooting knowing they're not likely to live to see tomorrow, much less the years of waiting around for the death penalty process to be completed. In the six major mass shootings over the past two years in Texas, four of the shooters were killed on the scene, either by police or by themselves.

Abbott can tweet all he likes and show up to memorials to pull sad faces, but his actions make clear that neither he nor his party care about these mass murders. If they did, they wouldn't be trying to deflect attention from the gun issue with go-nowhere issues like expedited executions. They'd be passing strong gun control laws to keep people like Seth Ator — or Patrick Crusius or Devin Patrick Kelley or Dimitrios Pagourtzis or Spencer Hight or Micah Xavier Johnson — from getting guns in the first place.