Sean Spicer mocked for tweet suggesting people who vote against him on 'Dancing With the Stars' are discounting Christ: 'The grift of victimhood' 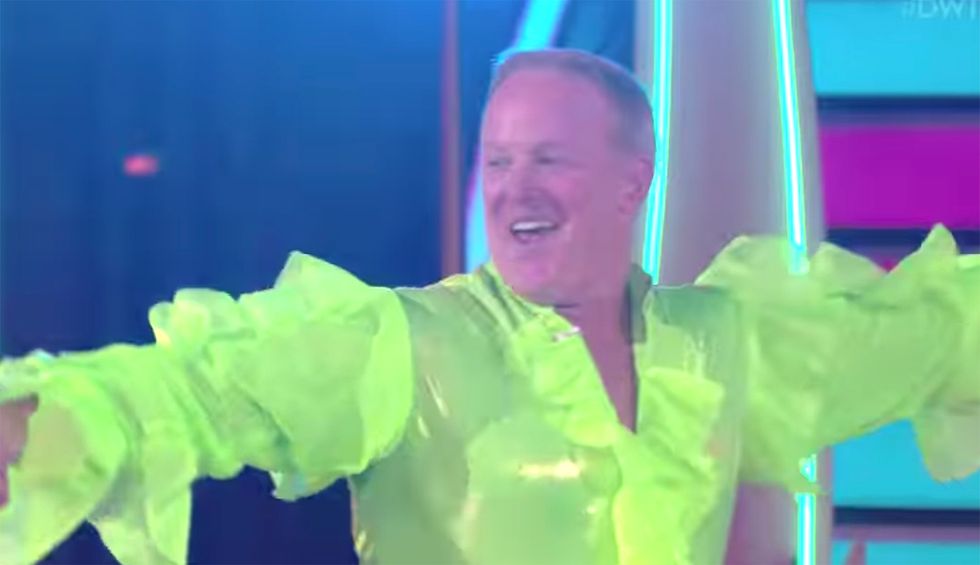 Former Trump White House press secretary Sean Spicer made his premiere performance on “Dancing With the Stars” Monday night, and was widely mocked for his outfit – and his dancing:

And while those can be dismissed as a pathetic attempt to gain attention – and clients for his public relations businesses – his pandering for votes to “own the libs” and to (supposedly) glorify God cannot.

Spicer responded, saying that a vote for him is a vote for Jesus. Literally.

Rather than blame his dancing skills, or lack thereof, Spicer preemptively blamed the judges, and added some religious pandering: “Let’s send a message to #Hollywood that those of us who stand for #Christ won’t be discounted.”

“Those who stand for Christ” The ever-pathetic @seanspicer trying to turn his bad dancing into some kind of symbo… https://t.co/EbuodPqTmI
— Soledad O'Brien (@Soledad O'Brien)1568721444.0

Here’s what others are saying too:

@seanspicer @GovMikeHuckabee Wow! Already turned this into an “us (good) versus them (evil )” competition. You people are sick.
— Pedro Gamboa (@Pedro Gamboa)1568712762.0

Trying to get the Evangelical vote to win Dancing With The Stars is peak GOP bullshit. https://t.co/SnMmp6KByK
— Greg Hogben (@Greg Hogben)1568721216.0

Sean Spicer suggests the DWTS judges don't like him because he stands for Christ. Hmm. Not that it really matters i… https://t.co/8hTObyVrHi
— Peter Montgomery (@Peter Montgomery)1568721455.0

What’s even the point of loosening up and having a good time if you can’t bring your bizarre persecution complex al… https://t.co/u8PCTgDYHq
— Jason (@Jason)1568721469.0

Remember, you biblical scholars out there: A reality show vote for the guy that defended concentration camps is a r… https://t.co/fugGCV8nas
— Mr. Resistor (@Mr. Resistor)1568722280.0