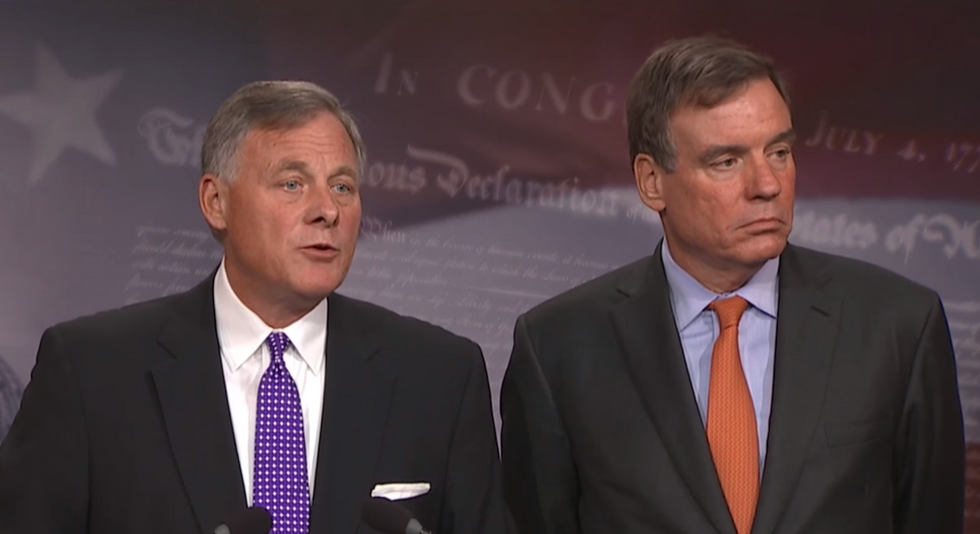 Since the explosion of the scandal surrounding President Donald Trump's efforts to induce Ukraine to investigate former Vice President Joe Biden, Democrats have mostly taken the lead in drawing attention to the blatant corruption. But that changed Tuesday, when the Republican-led Senate Intelligence Committee revealed its own investigation into the matter and requested that an intelligence community whistleblower appear in closed session by the end of the week.

Chair Richard Burr, a North Carolina Republican, wrote a letter to lawyer Andrew Bakaj, the lawyer representing the still-unidentified whistleblower, asking for the testimony "no later than Friday, September 27, 2019, in a mutually agreeable secure location." Yahoo News' Michael Isikoff first reported on the letter. The committee said the hearing would be conducted to "ascertain an appropriate path forward for your client while protecting your client's privacy." Democratic Sen. Mark Warner of Virginia signed the letter as well.

Isikoff noted that this effort signals that Congress is "ratcheting up pressure on White House."

Since Democrats took control of the House of Representatives in 2019, most oversight of the president and the administration has occurred in the committees controlled by the opposition party. While those investigations have touched on wide-ranging allegations of abuse and misconduct, the newest controversy has the potential to be the most incendiary yet. For all the furor and partisan bickering surrounding the case, the basic facts don't seem to be in dispute: Trump, via his lawyer Rudy Giuliani and in his own account of a phone call, has been pressuring Ukraine to investigate the Biden family, in an apparent attempt to smear his potential 2020 rival. At the same time, Trump has been delaying military aid from Ukraine that Congress had already approved. It is pretty much as clear an abuse of power as one can imagine.

House Intelligence Committee Chairman Adam Schiff first drew attention to the whistleblower complaint supposedly tied to this issue, and he has been at the forefront thus far of pressing for more information from the administration. Now, however, it seems at least one powerful Republican — Burr — is interested in having questions answered about the series of events, a signal that there may be more danger here for the president than he might have thought.