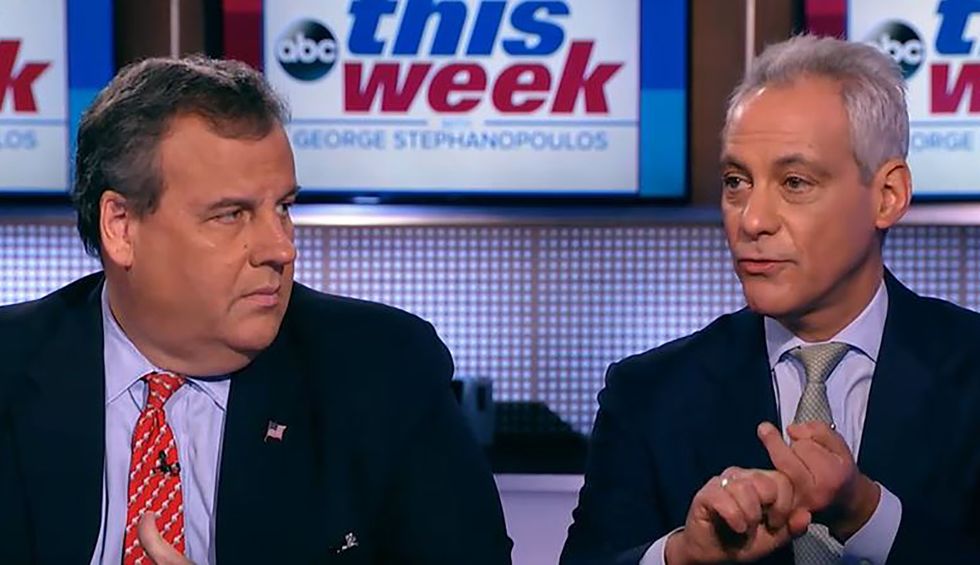 The ABC political show "This Week" on Sunday devoted a chunk of time to attacking Medicare for All, drawing fire for the segment's panel makeup and language.

Of particular gall to critics was the fact that the panel's nominal liberal was former Chicago Mayor Rahm Emanuel, a fiercely right-wing Democrat whose decades-long career in Washington, as Intercept editor Ryan Grim recently detailed in his book "We've Got People," has been devoted to stifling the party's progressive wing.

Sunday was no different as Emanuel, now an investment banker with the firm Center View Partners, took aim at Medicare for All by framing the broadly popular policy proposal as a danger to Democratic electoral hopes in 2020.

During the discussion, Emanuel attacked progressive calls for Medicare for All. Both men claimed that voters would viscerally reject any attempt to change the nation's healthcare system, both by getting rid of private insurance and offering care to non-citizens.

Recounting how he recently "biked around Lake Michigan, nearly 1,000 miles, through Michigan and Wisconsin," Emanuel said that at diners in the two midwestern states, one constant theme emerged.

"Nobody at a diner ran at me and said, take my healthcare away," said Emanuel.

"Rahm says no one at a bunch of Michigan and Wisconsin diners told him to take their health care away which is probably somewhat true since who in a diner would start talking to him at all," Perez said.

"It’s quite entertaining how he ends up being on the wrong side of every issue just about every time," Kashif Shaikh, founder of the advocacy group Pillars Fund, observed of Emanuel.

"As Democrats increasingly unite around solutions as big as the problems we face, the media still puts up panels featuring politicians with little relevance like Rahm Emanuel and Chris Christie solely to attack the progressive energy in our party," tweeted progressive group Justice Democrats.

Justice Democrats communications director Waleed Shahid added that the hostility around Medicare for All on network shows is becoming hard to ignore.

"There are 20 times as many pundits on TV who attack Medicare for All than advocate for it," said Shahid.

The right tilt of the three partisan members of the show was noted by Washington Post reporter Dave Weigel in a tweet.

Emanuel has been an ABC contributor since July.

Julie Oliver, a Democrat running for Congress in Texas' 25th district, opined on Twitter that Emanuel's position at the network might have something to do with the temperature of his takes on progressive priorities.

"Those willing to make the most specious claims do seem to get booked most frequently," said Oliver.

"The fact is that we already pay for everyone’s healthcare in America—in the most expensive, inefficient ways, with the worst outcomes," continued Oliver. "M4A is both a moral *and* an economic necessity."