Prodding the irreligious left to vote: If atheists and agnostics participated more strongly in elections, America's moral climate would improve 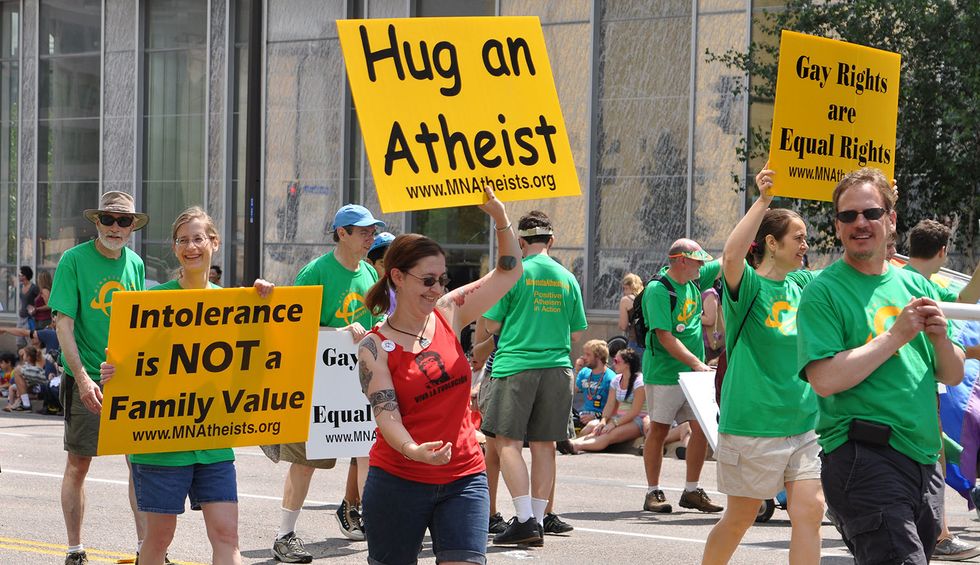 The best way to attain these advances is to boost voting by the swelling ranks of young Americans who say their religion is "none." More than any other population segment, "nones" tend to have liberal, tolerant, humanistic, modern views.

If they could be induced to participate more strongly in elections, America's moral climate would improve. But there's the rub: churchless Americans often don't vote. They shun politics as much as they shun supernatural religion. So their potential power lags.

In contrast, white evangelicals—although fading—are intense voters who form the core of the Republican Party. These fundamentalists have shrunk to just 15 percent of the population (down from 20 in 2012), yet they're so politically active they provided 26 percent of the 113 million votes cast in the 2018 election. Three-to-one, they supported GOP candidates.

But figures for the nonreligious are sad: They've climbed to one-fourth of the adult population, but they were just 17 percent of 2018 voters. Almost three-to-one, they backed Democratic candidates. It's too bad their turnout was so poor.

American politics reveals a travesty among white evangelicals. Jesus actually was a liberal who taught followers to help the poor, heal the sick, clothe the naked, feed the hungry, uplift the underdog, etc. His "social gospel" matches the public safety net supported by left-leaning Democrats. But white evangelicals overwhelmingly back the GOP, which tries to slash the safety net. In effect, they oppose Jesus.

Even worse, those fundamentalists laud President Trump, a much-divorced vulgarian whose view of women was expressed in his notorious "grab 'em by the pussy" recording. It's ludicrous for people calling themselves Christian to rally behind such a crass leader, and help his party hurt less-privileged families.

What can be done to persuade more "nones" to vote, to counter the overblown political power of white evangelicals? Could America's widespread secular movement unite in a get-out-the-vote drive?

Some efforts alreay are afoot. The Secular Coalition for America operates Secular Values Voter, publicizing the rising power of the irreligious. Similarly, other groups support Secular America Votes, which declares:

Showing politicians that atheists, agnostics, freethinkers and other secular people are a powerful (and growing) voting bloc requires getting out the vote and demonstrating that we are a force to be reckoned with at election time.

But this isn't enough, because the secular turnout remains weak. The ratio of "none" voters doubled from 8 percent in 2002, but they still fail to vote in full force.

There are 1.2 billion religiously unaffiliated people in the world…. more than there are Hindus. The sad fact is that atheists punch well below their weight…. Atheists love to exchange memes and engage in online discussions, but precious few of us do more….

When religious folk have a cause, they mobilize. They have established leadership, they get organized and they get out and help and donate generously. But we are keyboard warriors. The hard truth is: religious folk are better at this than we are.

During the 2018 campaign, the fundamentalist Faith & Freedom Coalition of Ralph Reed spent $18 million "to micro-target 125 million social conservative voters across 19 different states through door-to-door interactions, digital ads, phone calls and mailers," The Christian Post reported. The Family Research Council and Watchmen on the Wall mobilized thousands of born-again pastors to push their congregations for the GOP. The New York Times called this blitz "God's Red Army."

Obviously, secular groups can't spend $18 million on electioneering. But they need to do more.

Could many freethought organizations team up to appoint a volunteer task force to plan low-cost get-out-the-vote tactics for 2020 and beyond? One tactic might consist of a rousing message to be e-mailed to hundreds of skeptic outfits, who could send it to their member lists—and the members could resend it to like-minded friends.

The Democratic Party itself should launch an effort to mobilize the churchless as a large potential progressive voting bloc. David Niose of the American Humanist Association helped the Massachusetts Democratic Party pass a resolution praising the irreligious, saying: "The 'nones' are a group that, as much as any other, advocates for rational public policy based on sound science and universal humanistic values."

Why can't the entire Democratic Party see the looming power of this growing cohort?

It isn't easy to corral "nones," because they aren't gathered in well-marked congregations like white evangelicals. They're free spirits, scattered almost invisible through society.

However, America's future will be brighter if more of the churchless can be induced to wield the power of the ballot.