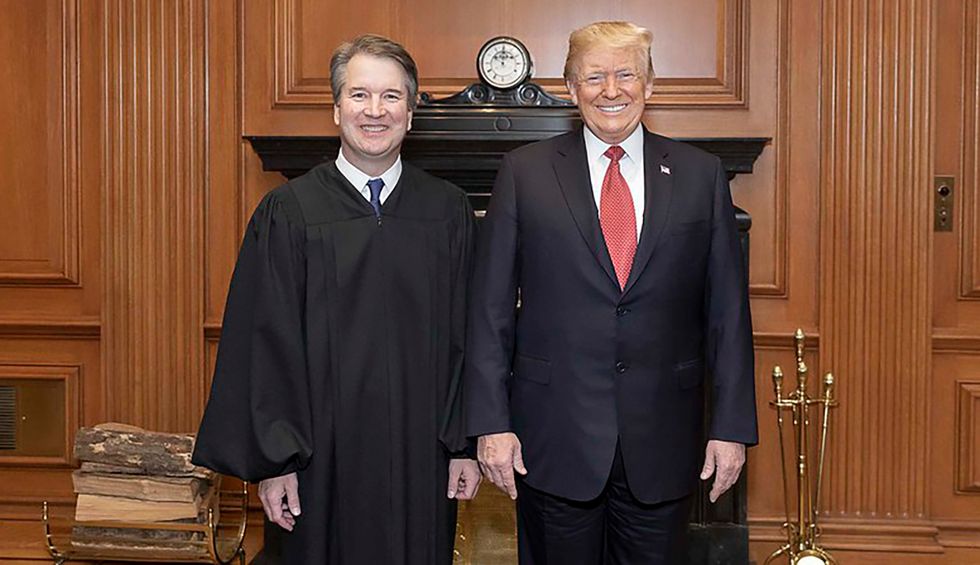 The New York Times outdid itself on Saturday, when staff took to social media to promote an excerpt from an upcoming book about alleged rapist and Supreme Court Justice Brett Kavanaugh’s time at Yale. The book excerpt, repackaged as an essay called “Brett Kavanaugh Fit In With the Privileged Kids. She Did Not,” focuses on the experiences of Deborah Ramirez, who, along with Dr. Christine Blasey Ford, came forward with accusations of sexual assault by the then SCOTUS-nominee in early 2018.

Unlike Dr. Ford, Ramirez was denied a chance to confront her accuser—or at least tell her story to the Senate Judiciary Committee. Deemed a “credible” allegation by FBI agents and confirmed by numerous witnesses, Ramirez’ encounter with Kavanaugh during their freshman year at Yale is described as a quick one: He whipped out his penis at a party, and stuck it in her face, forcing her to swat it away with her hand.

The essay goes on to explore how that incident, along with other issues Ramirez faced at Yale as a woman of color who didn’t come from money, shaped her experiences at the Ivy League school during the 1980s. Kavanaugh’s penis in her face is described as just “one of many painful encounters at Yale.” It’s a good, if rage-inducing piece, that chronicles her struggles after she finally came forward in 2018, which is a journey in and of itself. It also reveals a “previously unreported” allegation of Kavanaugh doing the same thing at another party.

We also uncovered a previously unreported story about Mr. Kavanaugh in his freshman year that echoes Ms. Ramirez’s allegation. A classmate, Max Stier, saw Mr. Kavanaugh with his pants down at a different drunken dorm party, where friends pushed his penis into the hand of a female student. Mr. Stier, who runs a nonprofit organization in Washington, notified senators and the F.B.I. about this account, but the F.B.I. did not investigate and Mr. Stier has declined to discuss it publicly.

All of this is to say that “Privileged Kids” is a harrowing investigative report, with lots of nuance and a solid narrative arc that ends in something like vindication for Ramirez. Not a bad pitch for the book itself, The Education of Brett Kavanaugh: An Investigation, by NYT Culture writer Robin Pogrebin and Kate Kelly, who covers Wall Street for the Grey Lady.

So of course—OF COURSE—the Times screws it up, with one “poorly phrased” tweet, which has since been deleted … as well as the “apology” tweet that followed it (and included a screenshot).

It’s okay if you need a moment.

Next, the New York Times equated sexual assault with “belonging.”

@nytopinion What's a better way to phrase the idea that shoving your dick into a woman's face at a party is fun and normal?
— Cody Johnston (@Cody Johnston) 1568507435

The New York Times also ensured that a new allegation and a solid story about a woman of color’s journey—from 1980s Yale to today—will be completely overshadowed by this dick joke fuckery.

Finally, the New York Times just demonstrated that misogyny and rape culture runs rampant, even trickling down to the social media marketing team.

First, it characterizes the humiliation of being sexually assaulted in front of one’s peers as “harmless fun,” with framing that implies any normal person would see it that way. Some estimates state that as few as 15% of sexual assaults are reported, or as “many” as 30%, for a long list of reasons that absolutely include the victim fearing that their assault wasn’t “serious” enough to warrant a report and all that comes with it. This tweet just reinforced that.

That means 70-85 out of every 100 sexual assailants face no consequences. Sky’s the limit for these bad actors when they’re never punished. Some get fancy black robes, and some get fancy white houses.

Next, it establishes Yale as a place where sexually assaulting women in front of other people is, in fact, considered normal, and because she didn’t agree, the tweet then others Deborah Ramirez by name. (Though college campuses are hotbeds for sexual assault, Yale can’t be too happy about this tweet’s take on their campus culture.)

Finally, sexual assault survivors deserve to have their stories told, but we must uplift them and support them when they have the courage to do so. This tweet is the opposite of that. This tweet mocks Ramirez, and reinforces the dangers of reporting.

For victims, though, not reporting doesn’t have much benefit, according to RAINN: “approximately 70% of rape or sexual assault victims experience moderate to severe distress, a larger percentage than for any other violent crime.”

I don’t say this often, but someone better get fired. Maybe a few someones. And anyone left in the entire company—yes, the ENTIRE COMPANY—needs some intense training on sexual violence, rape culture, journalistic integrity, and how not to be horrible.