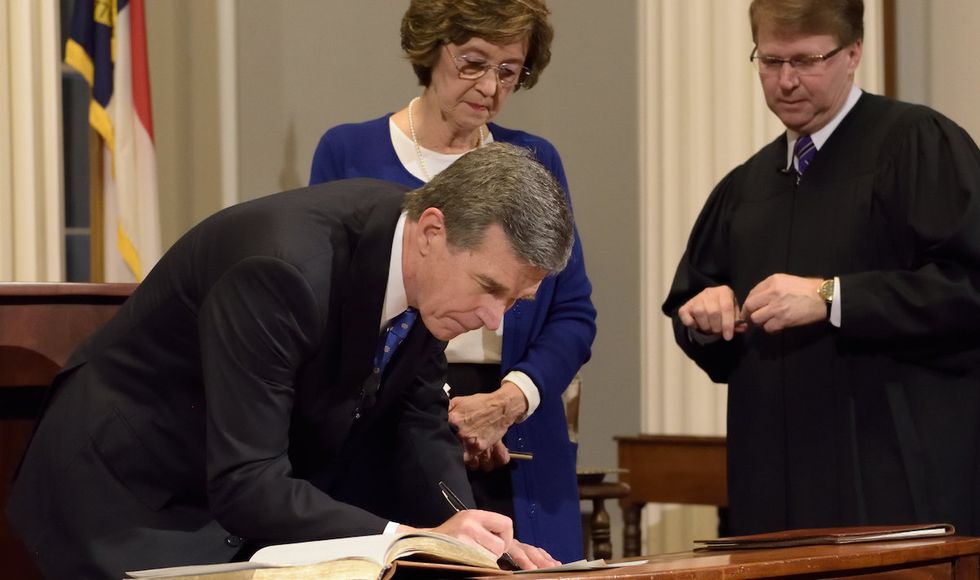 Republicans are once again displaying open mockery for the fundamental principles of democracy, and they don't care who knows it.

In a new editorial Wednesday, the Charlotte Observer editorial board, writing for the largest newspaper in the state, condemned that local GOP's latest power grab after it held an unplanned vote in the legislature while most Democrats were away.

Calling it a "shameless theft of democracy," the board explained how Republicans enacted their effort Monday morning to push forward with a measure to overturn Democratic Gov. Roy Cooper's veto of the proposed state budget:

Most Democrats were absent. Enough Republicans, aware of the secret plan, were there. When Rep. Jason Saine, a Lincolnton Republican, made the motion to reconsider the state budget, the handful of Democrats on hand objected strenuously.

“This is a travesty of the process and you know it,” said Rep. Deb Butler, D-New Hanover.

That it was, but with these Republicans a travesty of the process is just business as usual. With only 64 of the House’s 120 members present, the vote to override passed 55-9.

The board noted that the state Senate will now have to approve the override, and it called on the body to block the effort and "refuse to follow the theft."

"This is a case of breaking faith with the people of North Carolina and with all who strove and sacrificed over generations to protect and advance North Carolina’s political system as one based on a true representation of the people’s will, a true democracy," it argued.

And the state budget is no trivial matter. It affects services across the state, and the governor was attempting to use the debate to leverage support for Medicaid expansion in North Carolina.

This isn't the party's first anti-democratic gambit in North Carolina. Just the night before, the state held a special election in the 9th District for a U.S. House seat because of voter fraud carried out by the GOP. And North Carolina has been seen as the epicenter of partisan Republican gerrymandering. Last week, the New Yorker published a story revealing much of the secret work of a GOP operative in the state who gathered massive amounts of data to draw electoral maps that not only could benefit the party and disadvantage Democrats but also, it appears, target the voting power of black people.