'I've seen smarter cabinets at IKEA': See the most memorable signs from the global climate strike 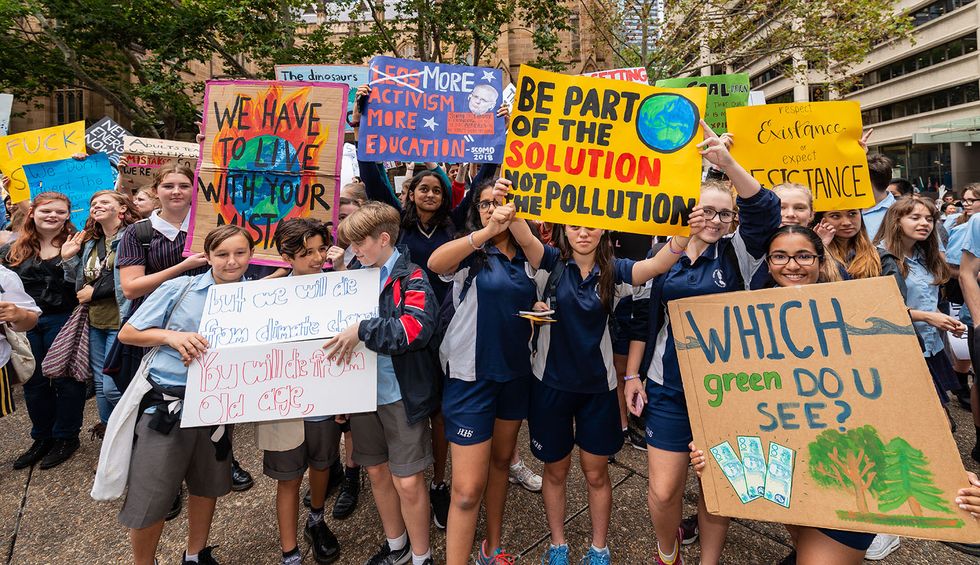 "Why should we go to class if you won't listen to the educated?" one homemade sign asked.

With millions marching to demand bold climate action in more than 150 countries around the world on Friday, a number of sentiments expressed on homemade signs and through other demonstrations captured the world's attention.

An estimated 400,000 people attended strikes across Australia to start off the day of action. The Australian Conservation Foundation shared a video of some of the young people, including one marcher who proclaimed, "You'll die of old age, we'll die of climate change," addressing the world leaders who climate scientists say are not working nearly fast enough to end fossil fuel extraction and the resulting carbon emissions which are causing global warming, rising sea levels, droughts, and other extreme weather events.

A number of signs rebuked the adults and politicians who climate scientists have told for decades about the dangers of continuing to support fossil fuel industries, which pump billions of metric tons of carbon into the atmosphere each year.

"Why should we go to class if you won't listen to the educated?" one sign in New York asked.

In New York City, one striker held up a sign reading, "There is no wealth on a dead planet" as the huge crowd marched up Wall Street.

Signs around the world alluded to the fears young people have for their future on the planet.

In Berlin, some strikers conveyed their message of urgency regarding the warming planet—and melting ice in the Arctic, Antarctica, Iceland, and elsewhere—with blocks of ice and a gallows erected near the Brandenberg Gate.

Other visual demonstrations took place in Portland, Maine, where a sign reading "Protect Mother Earth" was held up next to a woman laying in a coffin, and in London where protesters occupied Lambeth Bridge.

The Global Climate Strike has been led by young people and was inspired by the one-person protest 16-year-old Greta Thunberg began in front of Swedish Parliament last year, and subsequent weekly marches that drew thousands—but organizers urged adults to take part on Friday.

In Australia, one woman carried a sign with messages of support from her peers who weren't able to attend, and in Brooklyn, New York community members offered their support with a sign displayed at a subway station.

A message of support for “the students striking today” with love from “your neighbors” — Brooklyn, NY, Friday, Sept… https://t.co/jaFAamoc9o
— Lindsey Christ (@Lindsey Christ)1568985552.0

Children of all ages and their parents also displayed memorable signs.