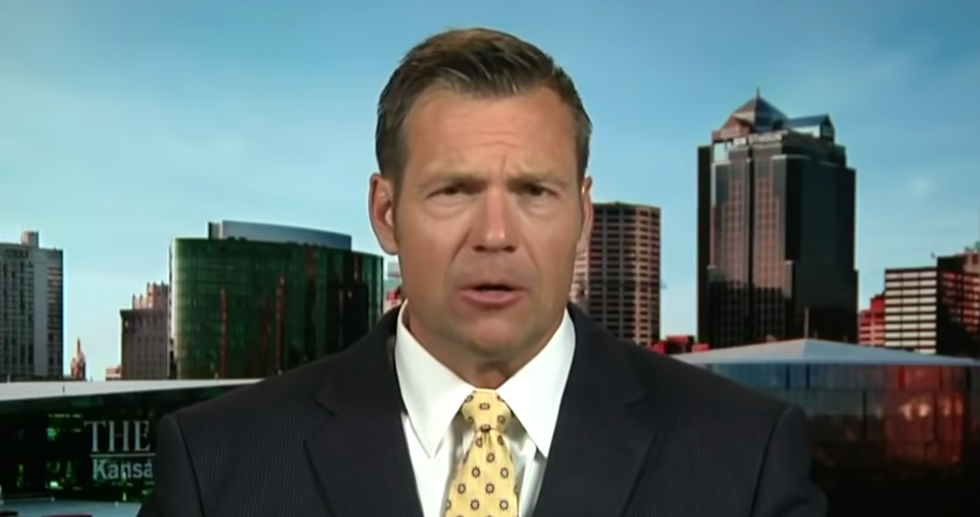 Next to President Donald Trump being voted out of office, the top ambition of the Democratic National Committee (DNC) for 2020 is achieving a majority in the U.S. Senate — which is a heavy lift but isn’t out of reach, especially if the GOP nominates Senate candidates who are unpopular even in red states. One such candidate is Kris Kobach, who is seeking the Republican nomination for the 2020 U.S. Senate race in Kansas. And according to internal GOP polling data obtained by the Wall Street Journal, Kobach would lose by 10% against Democrat Barry Grissom.

Kansas is a deeply Republican state — even more Republican than Texas or Georgia, both of which are best described as “light red” rather than “deep red” at this point. Nonetheless, Kobach lost to Gov. Laura Kelly, a centrist Democrat, in Kansas’ gubernatorial race in 2018. And according to the internal polling the Wall Street Journal has obtained, Kobach wouldn’t perform any better in a hypothetical matchup against Grissom.

The National Republican Senatorial Committee tested Grissom as a candidate in hypothetical matchups against various Republicans, including Grissom. Almost all of them could defeat Grissom by at least 8%, and the internal polling found a generic Republican defeating a generic Democrat by 8% in a U.S. Senate race in Kansas. But when Kobach goes up against Grissom in a hypothetical matchup, he loses by double digits — which is saying a lot given how right-wing Kansas is.

Kobach is extreme even for Kansas. The far-right wingnut is known for his  aggressive voter suppression efforts in that Midwestern state as well as for promoting the racist “birther” conspiracy theory when Barack Obama was president. The “birther” theory, which claimed that Obama was really born in Kenya and wasn’t a U.S. citizen, was absolute nonsense — Obama’s birth certificate clearly states that he was born in Honolulu, Hawaii on August 4, 1961 — but that didn’t prevent Kobach from promoting it.

In order to retake the U.S. Senate next year, Democrats will need to flip at least four GOP-held seats while keeping all of the seats they are defending.  Democratic strategists believe that GOP-held Senate seats in Maine, Colorado, Iowa and Arizona are in play, but they would need to flip five states instead of four if incumbent Sen. Doug Jones lost to a Republican in deep red Alabama. Roy Moore, the far-right Republican Jones defeated in 2017, has announced that he is running again — and Republican strategists are begging Moore to reconsider just as they are begging Kobach to reconsider.

Ordinarily, Kansas isn’t a state that Democrats are optimistic about: Trump defeated Democrat Hillary Clinton by about 20% in Kansas in 2016 compared to 9% in Texas and about 3% in Arizona. But given Kobach’s track record, Democrats are hoping that he will be Kansas’ choice for U.S. Senate candidate for 2020 and improve their chances of retaking the Senate.

Jerid Kurtz, a Grissom staffer, told the Wall Street Journal, “Barry Grissom is the strongest Democratic candidate to run for the U.S. Senate in Kansas in a generation, and he looks forward to a general election race against extremist Kris Kobach.”

Kobach is running for the seat presently held by Republican Sen. Pat Roberts, who is retiring and decided not to seek reelection in 2020.