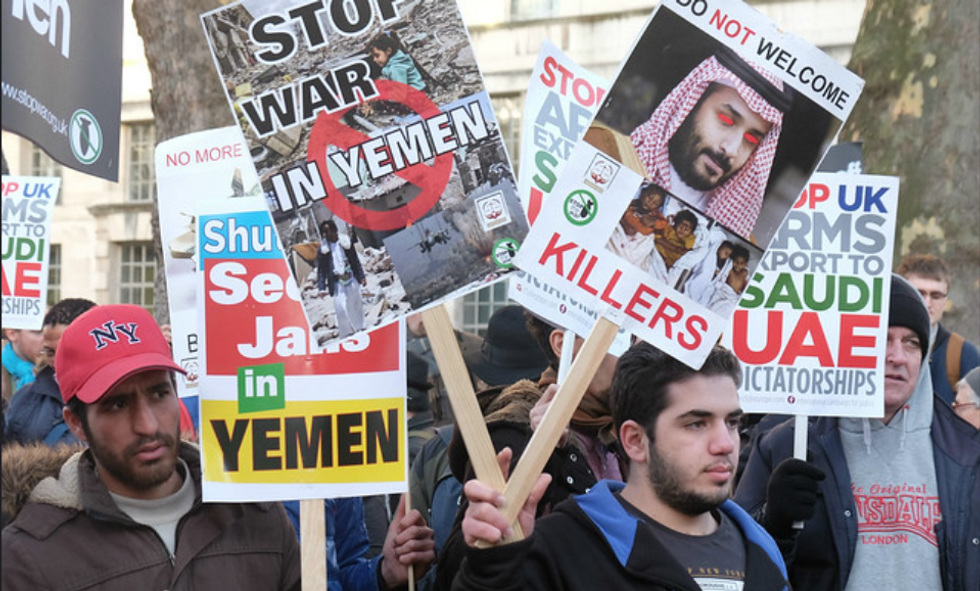 Saudi Arabia, which started the Yemen war with its own coalition of the willing, is now facing the blowback with Houthis launching a series of drone and missile attacks on infrastructure. Earlier Houthi missile attacks on Dubai and Abu Dhabi airports seems to have led to a rethink in the United Arab Emirates leadership on the dangers of military interventions abroad, leading to their partial disengagement from Yemen. The U.S. also has now announced direct talks with the Houthis. It is clear that the Houthi drone and missile attacks are causing a fundamental shift in the strategic outlook of the friends of Saudis as well.

Similarly, the strategic balance between Hezbollah and Israel also has shifted, with Hezbollah’s rocket arsenal now not only much larger than what it was during Israel’s 2006 war on Lebanon, but also with adding a precision guiding component to it. It is not that Israel is still not far more powerful than Hezbollah; it of course is. But in a war with Israel, Hezbollah does not need to win. It has only to inflict unacceptable damage on Israel and, while doing so, to survive militarily at home. If it can continue its rocket attacks and prevent Israeli forces from overrunning it, it would have reached strategic parity.

It is this frustration that may be leading to Israel’s upping the stakes and launching limited attacks on Iraqi, Syrian and Hezbollah installations. Hezbollah has retaliated by firing missiles at Israel’s armored vehicles, but after exchanging limited fire across the border, both sides appear to have backed off from a more dangerous escalation.

If Hezbollah had escalated these exchanges further, Israel may then have been able to secure direct U.S. support in its war against Hezbollah. Without this support, it cannot meet its goal of destroying Hezbollah.

In both Yemen and Lebanon’s case, the Houthis and Hezbollah are changing the way we look at military parity and strategic balance. They are showing that strategic balance is not parity or winning but inflicting damage while retaining the ability to fight.

So what has led to this change in the military balance? Strangely enough, the impulse for this strategic shift over the last three decades has come from the U.S., followed by Israel. The U.S. has a long history of “targeted killings”—or, in the UN language, “extrajudicial killings”—using weaponized drones. These have killed an estimated 8,459-12,105 (according to the Bureau of Investigative Journalism, as of August 29, 2019).

Though Israel is way behind the U.S. in its targeted killings, it has also used drones, missiles and other means to kill people outside its borders.

What has led to the shift in strategic parity using drones, missiles, and even explosive-packed boats being used as naval drones? It is the same shift that the world is seeing: the large-scale use of drones from pizza delivery to delivering mail and transporting goods. It is the same reason the Do-It-Yourself (DIY) movement has picked up on drones as an ideal showpiece. All you need is hobby aircraft models, which a lot of us have flown (or in my case tried to fly!). Some of them even had miniature petrol engines for prolonged flights. Earlier, all of them had to be tethered to the hobbyist in some way. What has changed is our ability to add intelligence, GPS tracking devices, gyroscopes, cameras, processors and other chips to such hobby planes to convert them to autonomous vehicles capable of independent flight. And if we add a communicating device to it, it can then be remotely guided a long way from the person flying it. In other words, it becomes the equivalent of a full-blown drone, capable of flying to a target, delivering its payload and even flying back.

How can we add all these elements to essentially what used to be a hobby toy aircraft? Guess what? All the above components are the basic chipset of a mobile phone. This is what led to the huge growth of hobbyists and the toy manufacturing industry. Chris Anderson, the editor of Wired, wrote in 2012, “It’s safe to say that drones are the first technology in history where the toy industry and hobbyists are beating the military-industrial complex...”

A preprogrammed drone today can be created by buying from any number of commercial civilian drones used for everything from crop spraying to surveying or commercial delivery drones at a cost of $1,000 to $5,000 depending on payload and range. And in a Do-It-Yourself mode, using off-the-shelf components is equally easy and comes at an even lower cost!

This is the genesis of the drone revolution. The cost of adding intelligence to what is essentially a simple model airplane and converting it to an “autonomous aircraft” is not a major technical achievement. The components are easily available; the chipset, communication and camera are bog-standard components available in any mobile phone. What is required are people with knowledge. Once that is added to the mix, we have intelligent devices not vastly dissimilar to the ones that the military-industrial complex develops.

Yes, the drones we are talking about, the Houthis’ Qasef 2 for example, are not the equivalent of Predators or Reapers that the U.S. uses—nor the U.S. flying behemoth drone costing about $220 million that Iran shot down. The drones that Houthis have used cost only a small fraction of the $5 million price tag of the MQ-1 Predator drone, which of course is reusable. But if Houthis can manufacture these locally, copying Iranian designs with components either manufactured locally or procured from the international market or Iran, then their cost is low enough to use in large numbers against their opponents. This is what the Houthis are using against Saudi Arabia.

A number of reports have charged Iran of supplying either the components or the design to the Houthis. This, of course, is in contrast to what the U.S. and the UK have done, who have transferred—and continue to transfer—not just the designs or components, but a large number of missiles and bombs to the Saudis in their genocidal war against Yemen. They also provide them with logistical support including help in real time targeting and maintaining this equipment in battle-ready conditions. Without the U.S.-UK support, the Saudis would be incapable of fighting any war, let alone the battle-hardened Houthis.

Why is Iran’s support to Houthis for defending themselves “illegal” and “destabilizing,” while the U.S.-UK support to Saudis is legitimate—in spite of it having caused the largest humanitarian disaster in the 21st century? To repeat well-known facts: An estimated 100,000 have died in the Saudi-led war in Yemen. A UN report early this year called it the worst humanitarian disaster in the world, and reported that 3.2 million are exposed to acute malnutrition needing immediate treatment, and 14.3 million in acute need. These are only the direct deaths. Medicines, water purifying chemicals, and fuel are under Saudi embargo, meaning that water, electricity, and sewage systems don’t work in Yemen. Schools are closed and so are hospitals. It reminds us of Madeleine Albright’s infamous comment in “Punishing Saddam,” an episode of 60 Minutes with Catherine Olian, that the price of half a million Iraqi children dying due to sanctions was “worth it.”

The problem that Israel faces is even worse. Hezbollah not only has a similar range of unarmed drones, but has a much larger number of rockets. It is estimated that Hezbollah has about 130,000-150,000 rockets of varying range in its arsenal today as opposed to the 15,000 it had during the 2006 war. Even if a small fraction of them have been fitted with precision guidance equipment, it is a lethal threat to Israel’s infrastructure—power plants, refineries and even the Dimona nuclear reactor. While Israel boasts of a three-tier aerial defense, no air defense is completely airtight. If a sufficient number of missiles are fired, some of them will get through. How long Israel can suffer from an air barrage and still continue its attack on Lebanon and Hezbollah will then become the issue. As I said earlier, Hezbollah has only to continue fighting and retain enough missile capacity to inflict damage on Israel, unlike Israel, which needs a decisive victory and to destroy Hezbollah. Ironically, Goliath—Israel and Saudis—is now faced with the Davids of Houthis and Hezbollah. And, unlike the past, all that David has to win today is just to continue fighting with his slingshots.

This is the nature of technology; its impact is sometimes much larger than anticipated, and in areas that appeared to have no connection. That is why we call such breaks technological revolutions. Who would have thought a change in the technology of communications could lead to a change in the strategic balance in West Asia? That mobile phone technology would revolutionize drone war was completely unexpected, more so its changing the calculus of war. Will this make peace look more attractive to nations and their citizens? Or will it lead to creating ever-growing numbers of missiles and missile shields? If we are not to go down the destructive route of ever-expanding wars abroad and militarizing at home, this is the key question we need to address today.