How American inequality follows us to the grave 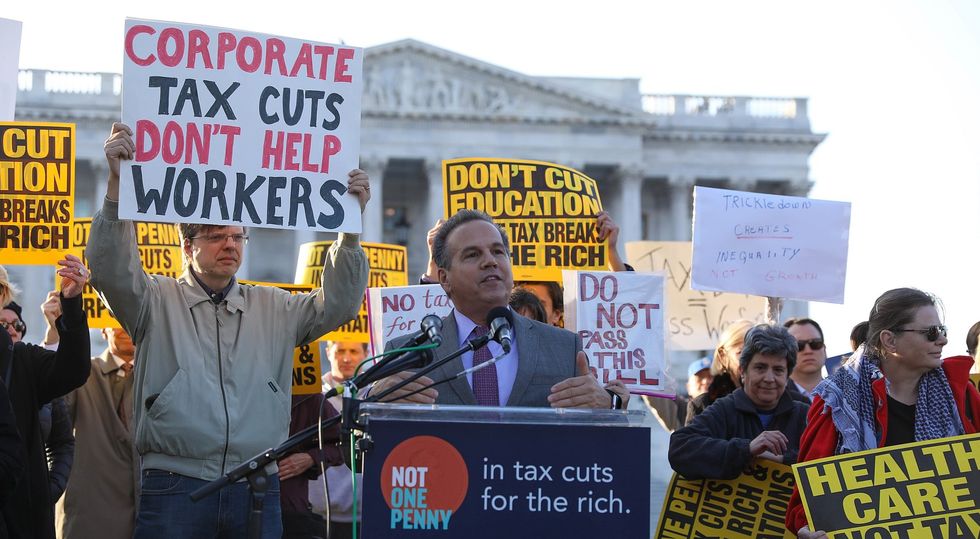 Regular exercise and an apple a day may help to keep the doctor away. But to live a long, healthy life, it helps to be rich.

Income inequality is a pox on America. The rich keep getting richer and the poor keep getting poorer. CEO pay keeps rising while workers’ paychecks have been all but flat for decades. As a result, income inequality now rivals that of the robber baron days of the early 1900s, when labor unions were virtually outlawed while corporate monopolies thrived.

It gets worse. It turns out that low income is an actual pox, killing people before their time. The nonpartisan Government Accountability Office found in a study released on September 9 that poor people live shorter lives than rich people.

This is appalling. And preventable.

Researchers at the GAO discovered that poor people are doomed to an early death. They tracked a group of people who were in their 50s in 1992—and found that that the wealthier members of the group were much more likely than the poorer ones to be alive in 2014.

Money may not be able to buy happiness, but it can buy longevity.

The early death effect of poverty plays out in whole neighborhoods and towns. Take the coal community of McDowell County, West Virginia, where the poverty rate is nearly 32 percent. As of 2016, a man’s life expectancy there was 63.9 years, the lowest among U.S. counties.

By organizing themselves into unions, workers can buy themselves more time on earth. That’s because median weekly earnings of union workers are about 22 percent higher than those of nonunion workers—$1,051 compared to $860, according to the U.S. Bureau of Labor Statistics.

The opposite also is true. The lower rate of unionism in recent years has allowed income inequality to grow, and that has led, as the GAO study shows, to disparities in life expectancy. Even the Grim Reaper favors the rich.

Because unions help build the middle class, government used to support them, especially under President Franklin Delano Roosevelt in the 1930s and 40s. But not now.

Now, organized labor is under attack. President Trump’s National Labor Relations Board has made a series of anti-worker decisions that includes denying unions access to an employer’s public spaces, such as hospital cafeterias; denying SuperShuttle drivers the right to organize; and allowing employers to withdraw recognition of unions before negotiations for a new contract begin.

GOP-controlled legislatures in states ranging from Wisconsin to West Virginia have passed so-called right-to-work laws that allow workers to benefit from union contracts without joining the union and paying dues and without even paying smaller fees charged to non-members to cover the cost of union services such as negotiations and grievance cases.

And last year, the U.S. Supreme Court, packed with Republican appointees, issued the Janus decision that made the entire country right-to-work for public-sector workers. In all 50 states now, public-sector workers who don’t join unions can pay nothing but still enjoy the higher wages and other benefits that dues-paying members get.

As right-wingers legislated away union rights over the past four decades, the power of unions declined, and the middle class became stuck. U.S. Census Bureau data released on September 10 show that middle-class wages are roughly the same now as 20 years ago.

Eight executives at Philadelphia Energy Solutions illustrate how the rich look out for themselves while stiffing everyone else. Together, those executives received almost $4.6 million in retention bonuses on the heels of the June 21 explosion and fire that shut down the refinery, pushed the company into bankruptcy and put about 1,000 employees—many of them members of United Steelworkers Local 10-1—on the street without pay or health insurance.

The employees were the ones who risked their lives the day of the disaster by taking quick action to prevent the release of lethal hydrofluoric acid, saving untold lives inside the plant and across Philadelphia.

The executives who operated the plant—and were ultimately responsible for the fire and explosion—got a big payoff. The workers got pink slips.

This kind of rapacity is so pervasive that it might actually be hurting the economy. Money is being concentrated in the hands of super-rich people who are more likely to invest it than spend it, and that can affect growth.

At the other end of the spectrum are people like those in the GAO study who died younger than they deserved.

Many of them relied on Social Security to scrape by in retirement. The poorest people in the group didn’t own homes or even cars. They had only what social insurance programs provided.

The Trump administration has so weakened Obamacare that the portion of Americans without health insurance increased last year.

And after Congress gave rich people and corporations that huge tax cut in 2017, Republican leaders talked about cutting Social Security and Medicare to pay for it. They didn’t do it yet, but the fight isn’t over.

Sen. Joni Ernst, a Republican from Iowa, recently suggested that Congress meet behind closed doors to discuss “changes” in Social Security. She said she feared public backlash from having the conversation in public. More specifically, she said she didn’t want to look like she was pushing “granny over a cliff.”

Sen. Ernst’s flippancy speaks volumes. It shows how little she and other Republicans think of the grannies and grandpas, dads and moms, and working men and women who have broken their backs to pay taxes and provide for their families.

Some will struggle all of their working lives, still be unable to save anything for retirement and die early deaths. Sen. Ernst needs to wake up. The Republicans’ pro-wealth, anti-labor and anti-social welfare campaigns are pushing people over a cliff before they live long enough to become grannies.