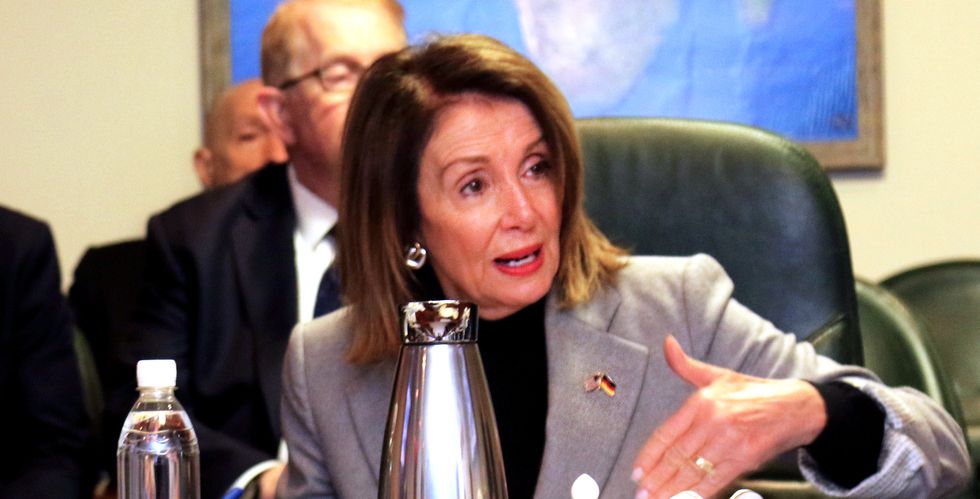 Speaker of the House Nancy Pelosi talks to U.S. Africa Command senior leaders and key personnel during a visit April 13, 2019 in Stuttgart, Germany. A group of congressional delegates including Pelosi visited AFRICOM to gain insight on the command's operations and activities supporting the U.S. strategy for Africa. (U.S. Army photo by Nate Herring/Released)
Alex Henderson
September 27, 2019

A major political bombshell dropped this week when House Speaker Nancy Pelosi — after months of holding back the push for impeaching President Donald Trump — came out in support of an impeachment inquiry in response to the growing Ukraine scandal.

Pelosi, according to reports from the Washington Post and the Guardian, has now very specific ideas on how to handle the inquiry: she wants it to move along quickly, and she wants it to focus narrowly on the Ukraine issue rather than delving into the Mueller Report and former Special Counsel Robert Mueller’s Russia investigation. And Pelosi clearly has her reasons for wanting this approach.

Before the Ukraine debacle burst on to the national scene, Pelosi was the Democratic Party’s most notable impeachment skeptic. But the speaker, during a Friday morning appearance on MSNBC’s “Morning Joe,” stressed that the newest scandal was a tipping point for her and that Trump “gave us no choice” but to move ahead with an impeachment inquiry.

According to Washington Post reporters Mike DeBonis and Rachael Bade, one congressional aide said that Pelosi has been emphasizing the “need for speed” with the inquiry. And she wants House committees to report within weeks. Adam Gabbatt, in The Guardian, reports that Pelosi, by “narrowing the focus of the impeachment inquiry to focus on the Trump-Ukraine scandal” and avoiding “a wide-ranging examination of the lengthy Trump-Russia investigation” is “said to be hoping for a quicker resolution to the impeachment inquiry.”

A narrowly focused inquiry, as Pelosi sees is, is also a fast-paced inquiry.

A senior Democratic aide told the Washington Post that House Democrats’ game plan includes “very few hearings, if any.” So why is she taking this route?

During the Russia investigation, Pelosi viewed impeachment as a distraction from key Democratic goals — for example, winning the presidential race in 2020 and taking back the U.S. Senate. And even though she now favors an impeachment inquiry, one that moves along swiftly would be less of a distraction from a heavy focus on policy next year. The Mueller probe, according to exit polls, wasn’t a huge factor in the 2018 blue wave in the House, but political battles over health care certainly was. It’s obvious that Pelosi wants to make sure that Democrats still have plenty of time to focus on health care and all the other dinner-table issues that could work in their favor in 2020.

It remains to be seen what an impeachment inquiry in the House will lead to, or whether or not there will ultimately be a full House vote on articles of impeachment followed by an impeachment trial in the Senate — where Republicans, many of them quite loyal to Trump, still have a majority. But whatever transpires, speed is clearly a high priority for House Speaker Pelosi.