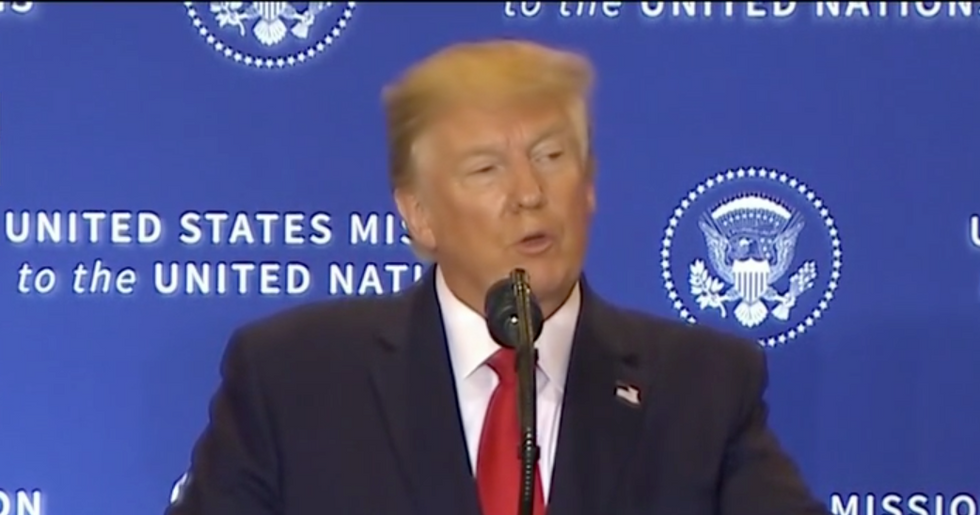 As pressure builds against President Donald Trump over the growing Ukraine scandal that has accelerated the drive for his impeachment, he held a press conference Wednesday afternoon at the United Nations in New York City.

He tried to downplay accusations that he has abused his power by pressuring the Ukrainian government to investigate Joe Biden and withholding congressionally approved aid from the country.

Though many expected the president to be boisterous and explosive at the press conference, fighting against the new impeachment push, he actually appeared subdued and deflated. As usual, he rambled and told a series of lies and misleading claims. While he took a few questions from the press, and was moderately aggressive in criticizing the media, he didn't exhibit the combative and outrageous tendencies some of his most memorable performances have featured.

Here were seven key moments from the address:

1. Trump claimed he has placed no pressure on Ukraine to investigate Joe Biden — completely belied by the partial transcript the White House released.

2. He blamed the Democrats for undermining his work at the UN with the focus on the Ukraine scandal.

Of course, the whole timeline of the events was determined by the whistleblower complaint about the matter, not the Democrats.

3. The president claimed that other world leaders gave him their sympathies for his crisis.

"So many leaders came up to me today and they said, 'Sir, what you go through, no president has ever gone through. And it's so bad for your country,'" he said.

CNN fact-checker Daniel Dale has noted that Trump telling a story in which someone calls him "sir" is a tell-tale sign that he's likely lying.

4. He said other calls with the Ukrainian president — including Vice President Mike Pence's conversations — can be released.

"I can save you a lot of time, they were all perfect," he said. "You can have it any time you need it."

5. Asked about why his conversation with Zelensky was appropriate, he gave a rambling answer that eventually drifted into the topic of his polling.

He said that we can add 10, 6, or 7 points any time a poll comes out about his approval rate to get the true number — but there's no credible reason to believe that. Most polls show Trump's approval rating is far below 50 percent, though he likes to tout outlier numbers that show him higher.

6. Trump tried to deflect accusations that he tried to extort the president of Ukraine to investigate Biden by falsely accusing Democratic senators of the same thing.

The incident he referred to concerned a letter Democrats sent to Ukraine in May 2018 about its closing investigations into Paul Manafort, the president's former campaign manager. This is a very different circumstance than Trump's corrupt demands this summer, and the president falsely claimed that the Democrats had tried to cut off aid to Ukraine. They did not, as Dale reported.

7. Trump gave an unimpressive peek inside his diplomatic skillset.

Speaking about the conflict between India and Pakistan, Trump recounted of his own mediation: "I said fellas, work it out, just work it out."

Trump on his diplomacy regarding the conflict between India and Pakistan over Kashmir: "You look at the two gentlem… https://t.co/bERoosjUyK
— Aaron Rupar (@Aaron Rupar) 1569444204.0