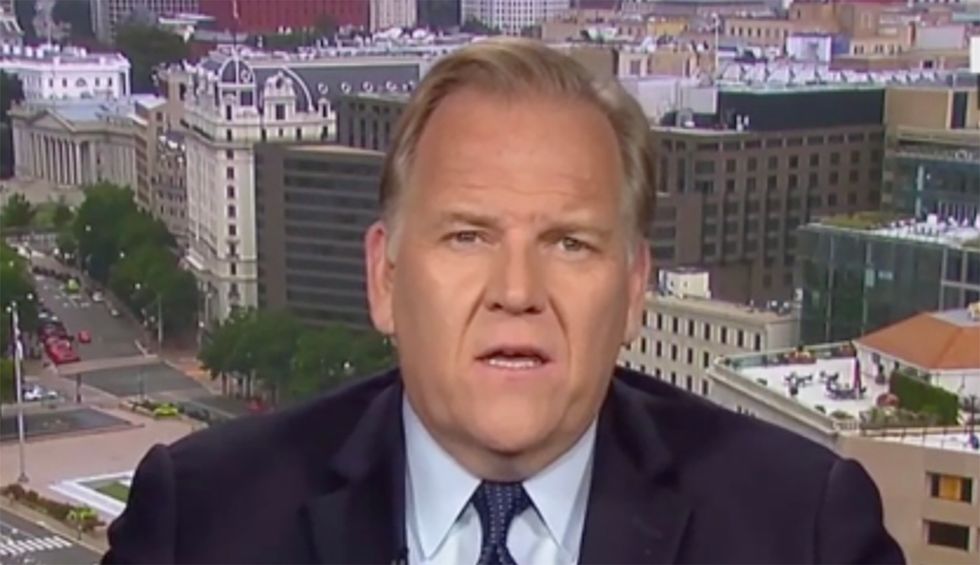 On Monday, former Rep. Mike Rogers (R-MI), a former FBI special agent and chairman of the House Intelligence Committee, analyzed the implications of President Donald Trump having forced the CIA to remove a deeply embedded U.S. spy from Russia.

“The goal of the intelligence services at any time with our adversaries is how close can you get to plans and intentions by the government,” said Rogers. “And those are always the hardest sources to come by. They tend to be closest to the decision makers that are kind of remunerating about their options or North Korean options or Russian options, and always the hardest sources to get and candidly most of those sources don’t just show up at your door and you get one, you tend to grow into these kind of jobs, and are developed over a period, a long period of time, to be able to be recruited and asked to do something, to create an act of treason against their country, and certainly an act of patriotism toward the United States by giving us information that keeps us all safe.”

“In terms, the folks would understand … how difficult would it be for the U.S. to develop a source like that, given exactly the restrictions and difficulties you describe?” asked anchor Jim Sciutto.

“Very, very difficult,” said Rogers. “And the reason it’s called a denied area is because the countersurveillance activities in a place like Moscow are unbelievable. And I’ve been there many times, to look at those kinds of operations. And I will tell you, that it is always the concern of the intelligence services, first and foremost, for the security of their asset, the person that’s providing this information.”

“You’re aware of the broad concerns in the intel community about the president’s handling of classified intelligence,” said Sciutto, noting Trump’s meetings with the Russian ambassador in the Oval Office and with Vladimir Putin in Hamburg. “How serious are those concerns? How should people at home digest that?”

“I think the one comment was given to me is it was just, it is a lack of discipline problem, on the information provided,” said Rogers. “And you have to remember, it doesn’t have to even be a direct thing that comes from a very sensitive source, it’s context, and if you talk about that context in a place that you shouldn’t, again, there are counterintelligence agents who are looking at hanging on every word that the president might say, and so, you know, my argument is better discipline on all of this information is critically important, going forward. One slight slip, and you lose access, very key access to what the Russians intentions and plans and thinking is.”