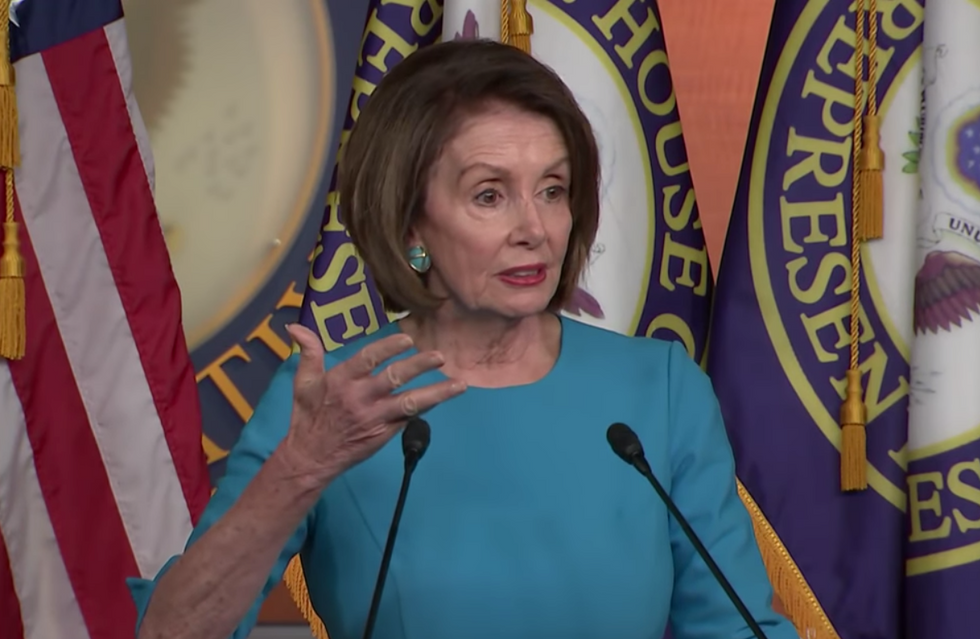 It's time to lead. An intelligence community professional has lodged a complaint against Donald Trump so troubling that the intelligence community inspector general deemed it both credible and urgent. Indeed, the revelation is apparently so credible and urgent that Attorney General William Barr and his Justice Department concocted a rationale for entirely withholding the complaint from Congress, tying the hands of the whistleblower and intimidating the IG, Michael Atkinson, out of sharing the details of the disclosure with Congress.

In a statement Friday, House Speaker Nancy Pelosi underscored the gravity of the situation, writing that Trump's communications with a foreign leader "raise grave, urgent concerns for our national security." Pelosi continued, "If the President has done what has been alleged, then he is stepping into a dangerous minefield with serious repercussions for his Administration and our democracy."

But the operative word in that sentence is if. At this point, lawmakers and the American people don't know exactly what Trump did. What we do know is that a complaint was lodged at great risk to the career of an intelligence professional, and that the same complaint was independently verified by the inspector general, who is a Trump appointee. We also know that Barr, who has proven to be nothing short of a partisan hatchet man, has pulled out all the stops to keep that disclosure from reaching Congress and the public. In fact, Barr has attempted to set up a legal roadblock to accessing the information that would leave the whistleblower and anyone else who reveals the disclosure open to prosecution.

The situation has quickly evolved into a crucial standoff between Congress and the executive branch—each claiming that the law is on its side. Of course, Barr still hasn't provided House Democrats with the legal rationale supporting the administration's refusal to provide the information to Congress as is statutorily mandated.

In her statement, Pelosi concluded, "We will continue to follow the facts and explore every possible option to ensure the American people get the truth."

The country does not have time for House Democrats to pussyfoot around on this matter. IG Atkinson called the complaint an "urgent concern" of national security, as did Pelosi in her own statement. The difference is, Atkinson actually knows exactly what happened, while Pelosi, House Democrats, and the American people are still in the dark.

Pelosi has continually stymied impeachment talk in the Democratic caucus by noting that public opinion doesn’t support such a divisive action. But by that standard, the public never will, because the White House and Attorney General Barr are depriving the public of the information it needs to make such a critical determination.

Pelosi's main concern right now should be protecting the security of the republic. That requires bringing to light the information regarding Trump's conduct so both Congress and the American people can respond accordingly.

As former Florida GOP lawmaker David Jolly told MSNBC Friday, "I think you open articles of impeachment on Monday and you say, We are going to vote as a House to begin an impeachment investigation." That would put pressure on the administration that it currently isn’t feeling. "If the House were to open an authorization for an inquiry,” Jolly added, “you can then subpoena the whistleblower and get all the tools you need to get to the bottom of this."

It's time to act. Pelosi knows damn well how to build public opinion in support of impeachment and how to cripple it. To date, she has been crippling it by starving the people of the facts. But if Democrats don't act now, Attorney General Barr will simply continue to obstruct, with no downside. And six months from now, we will be in exactly the same place we are now—with a lawless president and a Democratic majority in the House that has entirely failed to do anything to rein him in.