Critics say impeachment plays into Trump's hands — but then why is he acting like a cornered rat? 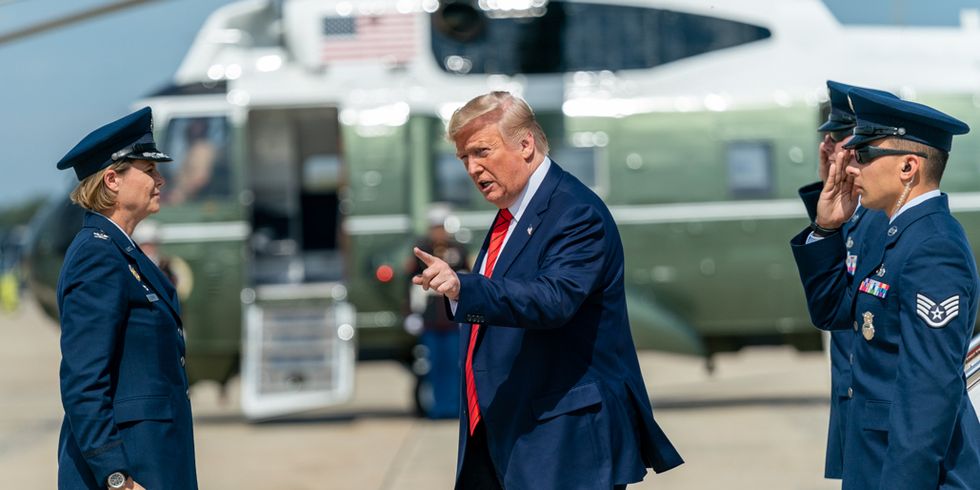 Now that House Speaker Nancy Pelosi has formally announced an impeachment inquiry into President Trump, after the release of evidence that Trump tried to intimidate and extort Ukranian President Volodymyr Zelensky into manufacturing a scandal against former Vice President Joe Biden, the usual hand-wringers who love to throw up "civility" as a shield to protect rich white men from accountability are in a full-on snit. (My colleague Andrew O'Hehir wrote about this earlier on Friday.)

David Brooks of the New York Times, driven by terror of raised voices at New York soirées, is in such a tizzy he's been driven to using bold fonts, threatening Democrats with a warning that Trump will somehow benefit from this because he loves "waging reality TV personality wars."

This idea that Trump will politically benefit from being impeached has been received wisdom among political elites for a long time, and clearly played a role in intimidating Pelosi from moving more rapidly. Trump himself has done a lot of work to seed this narrative that impeachment will help him, although it's unclear why people actually believed him, rather than seeing that as the ham-fisted attempt at manipulation that it obviously was.

As a member of the actually reasonable wing of the New York Times opinion section, Jamelle Bouie tweeted Friday, "no one has been able to explain the mechanism by which impeaching the unpopular, widely-disliked president makes him *more popular*."

Trump himself is not acting like a man who is satisfied that his devious plan to trick Democrats into impeaching him is working. On the contrary, his behavior reminds me of Peter Lorre's bug-eyed performance in the classic German film "M" as a pedophile yelling at a crowd about how unfair they're being to him just because he murders children.

Trump's Twitter feed does not paint the picture of a man who has this situation under control. On the contrary, he's been on perhaps his most frantic Twitter marathon ever, retweeting clips of similarly frantic right-wing pundits trying to cover for him, and trying to deploy the magic that all-caps prose is known to possess to make lies sound truer:

In another sign of the calm mental state of a man who knows everything is going his way, Trump is tweeting incomprehensible garbage about how CNN is out to get him because punctuation:

To show you how dishonest the LameStream Media is, I used the word Liddle’, not Liddle, in discribing Corrupt Congr… https://t.co/guKxTAXhvR
— Donald J. Trump (@Donald J. Trump)1569582162.0

Trump's lawyer, former New York mayor Rudy Giuliani, is also not acting like a man who has a handle on things after clearly being implicated in what appears to be an extortion scheme targeting Ukraine's political leadership.

This demented old man is going to end up bringing down a presidency, it's the funniest goddam thing I've ever seen https://t.co/fy7dvdCEB0
— Andrew Lawrence (@Andrew Lawrence)1569552109.0

I suppose it's possible that this is all a clever act, crafted by the same two aging New York racists who concocted a scheme to shake down the Ukrainian president like a pair of mobsters extracting protection money from a bodega. Perhaps they are political Svengalis who are merely performing utter panic for the cameras in order to lure their opponents into the trap of exposing more Trump crimes, and thereby helping Trump crime his way into the hearts of American voters. (People do love Joe Pesci in "Goodfellas"!)

But it's worth remembering that Trump really isn't an Oscar-level actor in that way. On the contrary, he's so terrible at holding it together for the cameras that he made life hell for the editing team on "The Apprentice," forcing them to find ever more innovative ways to use editing tricks to make Trump look competent — and still often failing.

No, Trump is sweating bullets because he knows impeachment is bad for him, and there isn't actually a huge groundswell of Americans who think that being a criminal is a résumé-polisher for the second term. It's catastrophic overthinking, a natural byproduct of the hot take and consultant-driven political scene, that has led anyone to think otherwise.As the Washington Post reported late Thursday, the White House cover-up schemes are quite expansive. Turns out that while the "transcript" released of Trump's July 25 call with Zelensky wasn't actually a transcript, there probably is a for-real transcript being concealed by the White House on what the whistleblower complaint described as "a separate electronic system that is otherwise used to store and handle classified information of an especially sensitive level."

That system, the Post reports, is being used not for its intended purposes, but as a place to dump all sorts of Trump phone calls with foreign leaders, suggesting that this call with Zelensky might be one among many where Trump has pulled out his third-rate gangster-movie villain act.  People who are confident that impeachment is a political win for them don't go out of their way to hide evidence like this.

"Democrats routinely mistake the panicked bluster of Trump cronies for unshakable masculine confidence," Alex Pareene of the New Republic wrote Thursday. "Trump is not begging to be impeached, and Giuliani does not relish the opportunity to embarrass them: Neither one of them wants to be here at all."

It's understandable that Democrats, traumatized by the 2016 election in which a non-scandal about Hillary Clinton's emails somehow ranked as more important than Trump's history of sexual assault and fraud, might react by simply assuming that up is down and black is white and it's somehow good for Trump if the news cycle is consumed with talk of his criminality. But it remains important to understand that the 2016 election was a fluke, the equivalent of Trump turning a bad hand into a straight flush on the last card in the river. It's a thing that happened. It's not smart to bet on such things happening again in the future.

Which isn't to say Trump can't win in 2020. He can, especially with the advantage of incumbency and a historically enormous campaign war chest. But these are conventional advantages of the sort that most political veterans can understand and anticipate. Trump really doesn't have some special sauce that allows him to turn traditionally serious defects, such as criminality, into assets.

Now is not the time to overthink this. Impeachment is bad for Donald Trump. One needs to look no further than the metaphorical puddle of urine on the floor of the Oval Office to see its impact.